Sisterhood of Snarky Stampers challenge #76 - Y did I buy that?

It's new challenge day at the Sisterhood of Snarky Stampers, and Edna is looking distinctly uncomfortable in her new necklace. 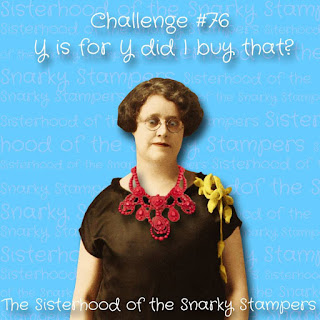 She's thinking "Y did I buy that?" and now we'd like you to delve into your stash and dig out something that makes you feel exactly the same.

I have chosen this butterfly printed, shocking pink, glittered acetate which I bought when I fell in love with it on a TV craft show. Why did I fall in love with it? Well, I only ever watch daytime TV when I'm not feeling well, and I must have been particularly feverish that day. I actually bought it in three colours, with coordinating foiled card, and have had it sitting in a box in a dusty corner for several years because I didn't have a clue what to do with it, especially the pink as it is just so garish. Even my four year old granddaughter has refused to use it!!! 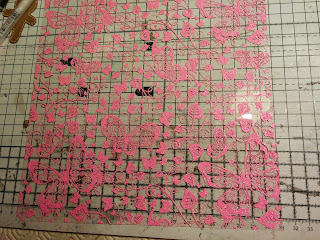 I decided to make the most of the shocking pink by using it as an overlay over some black and white script paper from the DCWV Stack 9 pad that I love so much. Thanks to Sister Barbara for the inspiration! 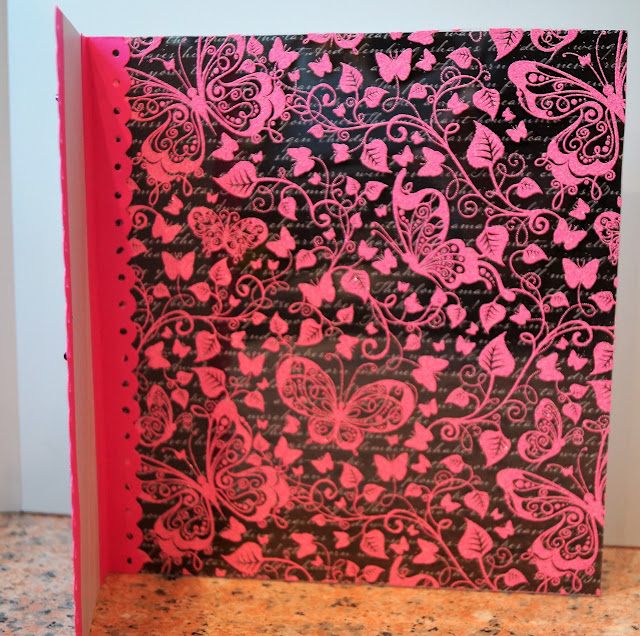 Acetate being a right so-and-so to stick down invisibly, I just went with the extra strong double sided tape and then covered it up with a punched border. CHEAT!

I'd made my card by folding over one third of an A4 sheet, so there is only a half panel for the front, and covered that panel with the same backing paper and then added some punched butterflies, a border to match the one on the inside and a Dylusions sentiment that is designed to remind me (and you, and the Sisters) never ot make such an ill considered purchase again! 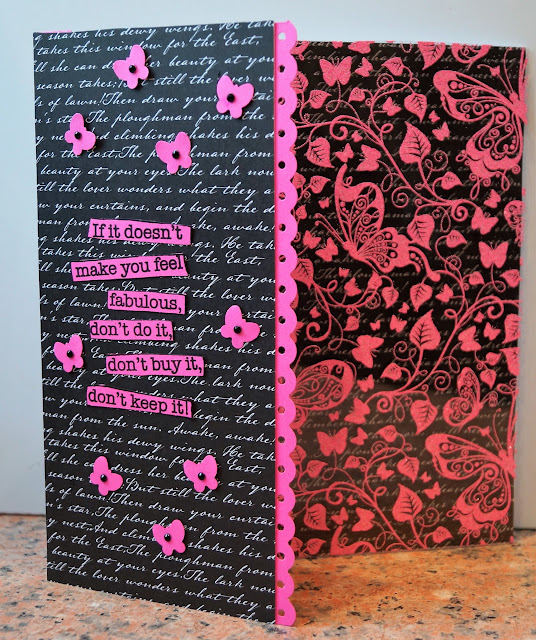 Hmm..... now it's finished, I actually quite like it. But maybe not enough to  go out and buy another batch of the acetate.

So, what's lurking in your stash that you wish you'd never bought? Why don't you dig it out and see what you can do with it? And please pop over to the Sisterhood  to see what the Sisters have created and share your work, so that we can share your pain. You could be crowned our Queen or Princess of Snark
Posted by Jane Willis at 11:30

This is a really beautiful card. I love the combination of pink and black. Sian.

thanks for the shout-out, I knew it would awesome and it does. Fabulous job

I quite like it too! You are right the black really tones down the pink...it's quite beautiful together!!
Fab job on the challenge sistah!!

Yep, the black paper really tones down the pink, and now you've created something fabulous with it!

A fantastic card Jane, the acetate looks nothing until it's put with the black and then it seems to come to life.

Great job using something that you didn't even like!! This challenge has my name written all over it - hope I can get it together and join in. Miss you <3 XO Christi

I think maybe my granddaughter when she was 4 might have been willing to use that acetate, but I'm not entirely sure... :P I think you did an amazing job with it, and I'm waiting for the card set in all the various colours. PERFECT sentiment!

You did great, Sistah!

Don't you feel better now that you've got something used up (did you save the scraps?) and no longer have it sitting in your stash? No more day time TV for you while you are sick.