I love this little teddy - a magazine freebie stamp from some years ago -  and because of the Santa hat I tend to always colour him in traditional Christmas colours, but today I wanted a change. And I remembered that before the convention for red clothes came along, Santa usually wore green or blue. It's often said that the red robes were introduced as part of a Coca Cola advertising campaign, but then again I've heard that that is an urban myth.  Anyway, I coloured the hat green and let that be the starting point for everything else about my card. 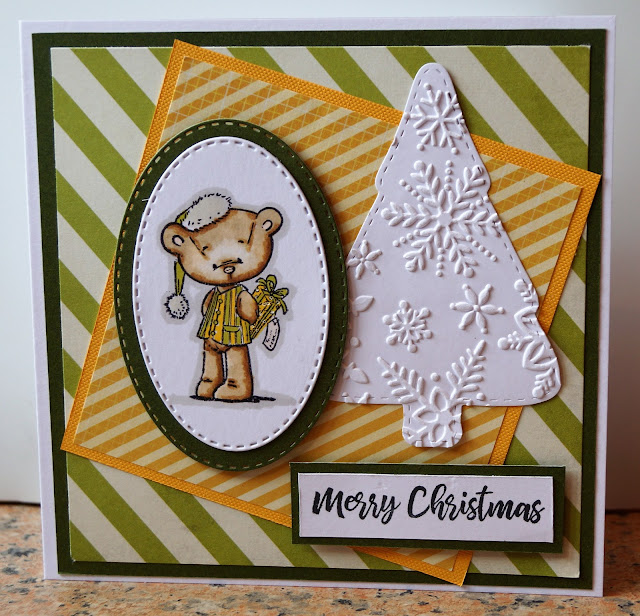 And in the way of best laid plans that go aft a-gley, I added yellow into the mix because I had a cute large green and yellow bauble button that I also wanted to use, so picked a shade of yellow that went perfectly with it and used it for the stripey paper and  the colouring.... and then when i started to put the card together, the bauble looked all wrong, it was just the wrong shape, the wrong style, the wrong everything. But the card looked bare without it, so I die cut a tree and ran it through a snowflake embossing folder and everything came together much better so I used that instead.

Christmas Kickstart - Christmas Kids
Rudolph Day at Scrappymo's - with apologies for being a couple of days late to the parry, blame my battle with the bauble that delayed my completion of the card!
The Library Challenge - The Art of Stripes
Posted by Jane Willis at 12:52

He's lovely, Jane, and I'm appreciating the non-traditional colour combo big time. Love embossed tree and the layout of this little beauty. Thanks for playing along again at The Christmas Kickstart Challenge, Jo x

Hi Jane,
Happy Rudolf Days.
He sure is cute and so lovely.
You have coloured him wonderfully.
Love the embossed tree and super strip papers used.
Thank you for joining the Rudolf Days Challenge.
Lots of crafty love. Jenny L. DT

Such a gorgeous card Jane, I love the embossed Christmas Tree.
Thanks for joining in at the Rudolph Days challenge this month.

Your bear and the card design look terrific! I much prefer Christmas trees to buttons anyway. And since Jo was brave enough to let me play elf... thanks for playing along at Christmas Kickstart!

The design turned out great in the end and I like the different colours and styles of stripes you've used. Thanks for joining The Library.

I like your non traditional coloured Christmas card. I especially like the way you embossed the tree die. What a great idea. Looks good with your cute image.

Thanks for taking part in the May Rudolph Days Challenge.