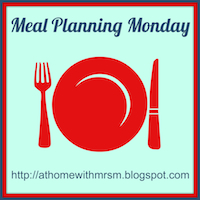 I've not joined in with Meal Planning Monday for several weeks because we've been having the sort of weeks that can't be planned more than a few days at a time, so I'm pleased to have chance to plan ahead this week and join in again!

Monday Mark is cooking. I know the meal will involve pork escalopes, and I can see bread rising, but I don't know his exact plans (or indeed whether he actually knows them) yet.
Tuesday Teryaki chicken using this recipe but not in a slow cooker - I cooked chicken breasts in the slow cooker last week and wasn't happy with the result. It isn't really the kind of dish that NEEDS a slow cooker! A mixed vegetable stir fry with it.
Wednesday Mixed vegetable cottage pie with swede crust - a recipe from the gorgeous "More Veg Cookbook" which I won in a competition last week.
Thursday New Potatoes Lorraine from the June issue of Good Food magazine. This is potatoes, bacon and shallots baked in a cheesy custard  - it looks like a more refined version of a similar dish I've been making for many years that has potatoes, bacon, onions and sausages baked in custard.
Friday something vaguely Mediterranean is starting to take shape- we have lots of mint and parsley, so there will be tabbouleh, and there's a pack of feta that needs using so I'll probably do a Greek Salad and a melon and feta salad. Maybe some hummus too, and some pita breads or some other flat bread, depending on how much time I have.
Saturday and Sunday I expect Mark will be cooking one day. The other, inspired by the eternal gammon that keeps failing to be eaten by Foodie Quine,  I'm going to make gammon with new potatoes, parsley sauce and PSB.

What are YOU eating this week? Why not pop over to At Home With Mrs M and share a link to your plans?
Posted by Jane Willis at 11:39

Love the sound of Friday night. Can I invite myself round? ;-)

I love a bits and pieces meal like that, especially if I can engineer things so that I have time to prepare the dishes on and off all day so there's no mad rush at the end. Just hoping the weather's good enough to eat in the garden, to put the icing on the cake. However since you didn't save any gammon for me you could well be off the guest list!