Last month one of the craft magazines ran a daily competition on Facebook with lots of prizes and I was one of the lucky ones, winning this lovely layering stamp set from Altenew. The trouble was I didn't have enough inks in shades of any one colour to try the layering. Then I took part in a video survey for a craft business and was given some vouchers to thank me for it - enough to buy two  Altenew packs of coordinating mini ink cubes, so over the last rainy few days I've been having a play. 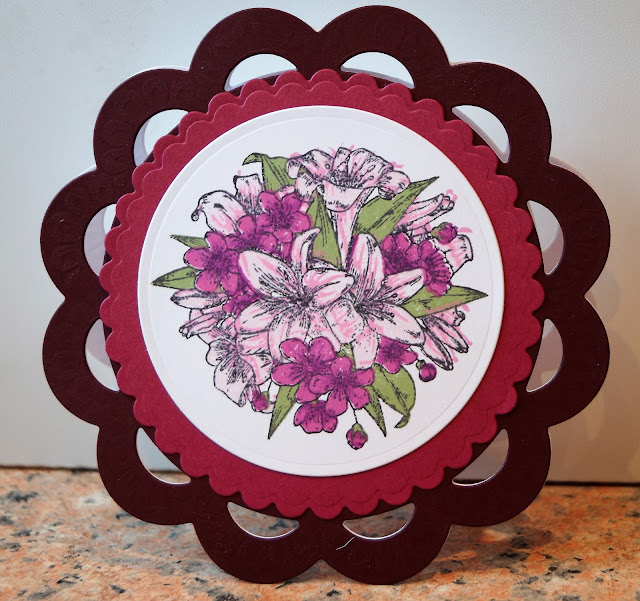 I'm not used to lining up the different layers yet, as you can see - I think maybe some guidelines on the stamps would help a lot, maybe I'll try adding some with an indelible pen. I have another set of layering stamps lurking in my NBUS where it's been loitering for several years - I wonder if I'm brave enough to give that one a try now?

For the base card I used a Marianne large scalloped circle die to cut a card blank, making sure the die was positioned so that the card would rest on two scallops symmetrically at the bottom  and that it overlapped the fold to leave it hinged at the top, then cut the circle again in deep ruby card and aligned it over the base card. Then used my old faithful Nesties to cut out the image and a light ruby scalloped layer.

Make My Monday - anything but square 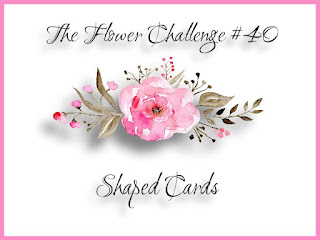 Lovely card and what a lucky lady.

Congratulations on your win, and I think you did a beautiful job of layering the stamps - something I know nothing about yet! LOL The floral image looks so pretty on those scalloped layers too! Well done!

Congrats on your win.....you did a great job with those stamps! Love the black base......makes the whole thing pop x

Lovely and beautiful card.
Thank you for sharing at Allsorts;-))m

Love circle cards and this is a really great shape and a lovely image. Thank you for joining our 'Say it with flowers' challenge at Allsorts.

What a real delight this is Jane, always love circle cards and flowers are the icing on the cake. And well done on the wins.

Thanks so much for sharing with us at Allsorts and joining in with our 'Say it with Flowers' theme this week.

You are so lucky. I love Altenew. I think you've done a fabulous job of it. It's lovely. Love Dawn x

How stunning! Thanks for playing along with us at Make My Monday Challenge. Looking forward to seeing your creative projects in the future galleries again.

Such a beautiful card Jane love those flowers and the design you decided on. Thank you so much for joining us at The Flower Challenge and we hope to see you there again soon. Aileen DesignTeam