An easel card for a friend

A few days ago, my friend Marina asked me on Twitter whether it was difficult to make an easel card. I replied that they are very easy to make, and  I would send her one to pull apart so she can see how it is done.

Marina received her card this morning and now she says she doesn't want to pull it apart, so here is a quick description of how to make a basic easel card. 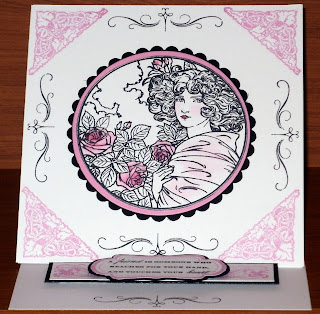 Start with a square card blank plus a square of card cut to exactly the same size.
Fold the front of the card blank in half, with the outer flap towards the inside - this makes the support for the easel.
Now decorate the unfolded side, which will become your card's base. Incorporate a raised element about halfway across the card, as you look at it from the free edge. This will be where the edge of the card front rests when it is in the easel position. You could use buttons, large-headed brads or a raised border. In this case I have used a border, raised with foam tape, and added extra height with a sentiment, also raised with foam tape.
Decorate the separate square, which will become the card front. Make sure any writing doesn't go right to the bottom where it could be obscured when it is standing up against the raised area on the base.
Cover the folded-in flap with adhesive and, with the card opened out flat, stick the front to it, carefully lining up the edges. 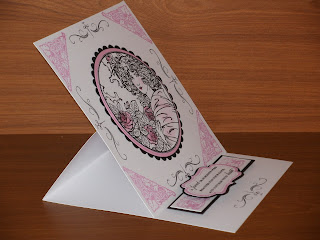 This shows how the folding works - you can make the card more upright by having the raised area on the base further back, but it can also be more likely to topple over if  all the weight is too near the back! 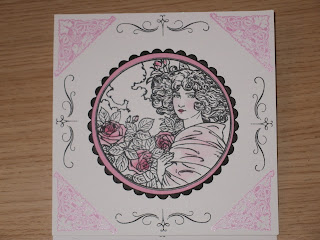 The card fold flat for posting.

The stamps I used were mostly from a sheet of clear stamps I won many years ago from Tanda stamps. It has been a much loved addition to my collection and I see it is still in production. The flourish and sentiment came from the Anna Griffin kit I blogged about here.
The inks were black Memento and pink Brilliance - I really had to incorporate some pink.... anything for Marina has to be pink!!! I didn't want to detract from the impact of the image by adding too much colour, so I just highlighted a few areas with a pink Marvy and a watercolour brush.

I hope you like it, Marina, and I hope this will help you to create easel cards of your own.

I'm submitting this for my first ever contribution the The Crafty Pad challenge, which this week is "More than one gold"

I adore it and thank you for the pink too lol

This is a lovely easel card and you have given such clear instructions.
Thank you for joining us at The Crafty Pad this week.
Pauline
x

Such a pretty easel card! I can see why your friend wouldn't want to pull it apart!
Thanks for sharing in the More Than One Fold Challenge at The Crafty Pad this week!
Good Luck
Hugs
Dawn xx

Your card is lovely, poor Marina would of course feel bad pulling it to pieces!! Welcome and thank you for joining us at THE CRAFTY PAD, I do hope you will join us again soon.
Ali x

Thanks for all the welcome messages, I've really enjoyed joiing in and am looking forward to future challenges