My Life in Cook Books

This post was originally posted on my other blog, Competition Grape Vine, in February 20122 but I feel it really belongs over here.

As most of you know, I am a keen cook as  well as a comper, and have sometimes combined my hobbies to win some wonderful prizes in recipe and food related  competitions, including a cookery holiday to Italy, a gourmet tour of India and a new kitchen. So where  does my inspiration come from? I love shopping for food,watching cookery programmes on TV, wandering round farmers' markets at home or abroad and collecting recipes. I have hundreds and hundreds of recipe books, as well as piles of  cookery magazines and several folders and photo albums stuffed with recipes cut out of magazines and newspapers or scribbled down on scraps of paper. One of my favourite recipes, Jamaican brown stew chicken, is scribbled down on the back of the till receipt from the restaurant where it was served to me. It wouldn't seem right to make a fair copy of it now! I can't list all my books - it would take weeks and you'd get bored (you probably already are) and when it comes to the classics and the celebrity chefs, you've probably got them yourself or you aren't interested. So apart from possible one mention of  Delia before she became famous, you're not going to see Jamie or Gordon, Nigella or Gary or even the unmatchable Elizabeth David mentioned here. Instead, I am going to use selected books  from my collection to illustrate an autobiography. When I left home for University, I literally didn't even know how to warm up a tin of beans. And since I was going into fully catered accommodation, my parents saw no need to teach me. However one of the many crises of the 1970s (was it the oil crisis? the miners' strike?) meant that the college decided to save fuel by closing the kitchens at weekends, and my options  were to  either find a boyfriend who could afford to take me out for every meal, live on crisps all weekend,  or learn to cook. So off I went to the bookshop but was horrified at the price of all the recipe books. I couldn't buy them on "tick" so I had to find some alternative I could pay for gradually. Help was at hand in the form of Cordon Bleu Monthly, which had just started to be published in 18 monthly parts. 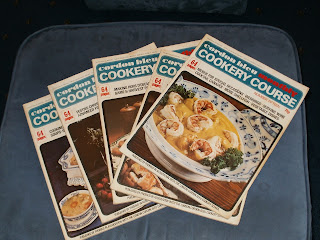 So in the space of  a few weeks I went from being totally unable to cook to producing sophisticated (for the time) Cordon Bleu dishes and eating meals  far better than those served up by the college. Forty years on, those magazines are still in regular use and have pride of place in my bookshelf.  After University I married  Mark (see my link to Marksvegplot on the right for more about our love of food) who was at that time an officer in the Brigade of Gurkhas. We went to join his regiment in Brunei and I immediately became interested in the local food, influenced  by Malaysia, Indonesia, China and Singapore. There was only one bookshop in the town where we lived, but from there I got two books which have had a huge influence on my cooking over the years. "Art of Indonesian Cooking - the ABCs" is still one I use on an almost weekly basis; it contains many of our all time family favourites. 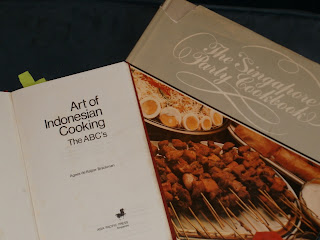 From Brunei we  moved to Hong Kong, where we  were to live on and off for several years, until Mark left the Army. I have dozens of Chinese recipe books, but my favourites are a collection of small bilingual (right up to this point I've been thinking "Must not type bisexual, must not type bisexual...." because that's what I jokingly call them)  which contain the sort of everyday recipes eaten in Chinese homes and the more  "ordinary" restaurants visited by local people rather than tourists. Some of the recipes are ones  I use over and over again - others, such as one that needs 10 pairs of duck's web, 3 oz fish maw, several xanthoxylum seeds,a  piece of old orange peel and  some lard, are kept just for entertainment value. The translation is quaint in  places too: it was a relief to get to the end of one rather unpleasant sounding recipe and read "discard  all ingredients". 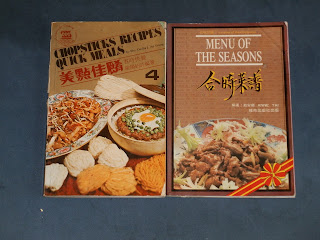 By now it was time to start thinking about starting a  family and then buying our first home  - naturally that meant we had less to spend on food  and I had to start collecting books of a different kind. Ones  about budget cookery! You can see from the condition of them that they have become much loved favourites - in fact these  books now live in a basket in my kitchen so I can grab them for quick reference. And there's a little glimpse of St Delia, with her  book "Frugal Food" which was first published long before she became a TV celebrity,  and  was reprinted in a bigger, glossier format a  year or two ago. 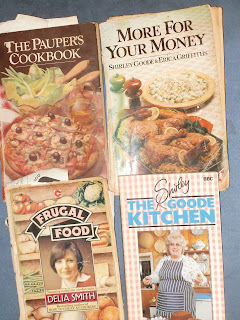 Now moving on to the present day. Naturally I have bought recipe  books from all the places I have lived and  visited, but my knowledge of food around the world has been enhanced by the beautiful books in the Culinaria series. These books are  far too good to cook from! 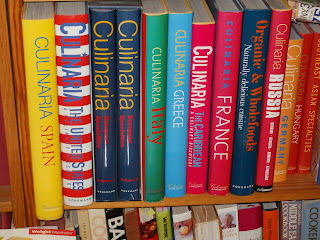 Food from  the early to mid 20th century is a particular interest of mine and I have an extensive collection of  both old and new recipe books from and about the period, from promotional leaflets to facsimile books. My favourite is called "Economical Cookery", published in 1937. It starts with a suggested menu for every meal of the year, with Sunday's menus being costed out. How eating has changed! For instance today's menu should be BREAKFAST      Prunes, coddled eggs LUNCH                Celery soup, Skate with black butter, Sauté potatoes, Honey Cap Puddings EVENING MEAL Welsh rarebit, Coffee rice mould. Sunday's roast beef would have been a 4lb piece of topside at a total cost of 3/- (15p). 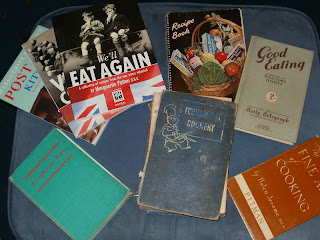 I'm going  to finish with a couple of real gems from my collection. The first is one that Mark brought home when he went to Papua  New Guinea on Army business. Kaikai Aniani is a fascinating book about food of the area, past and present, showing how  all sorts of  things  such as crocodiles, turtles, snakes and even  people  are (or were) prepared and eaten, and including such tempting treats as Sago Grub Satay and Flying Fox and Prune Casserole. 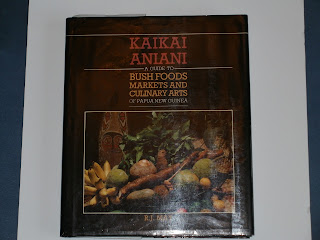 The second is called "The Erotic Baker" - a collection of recipes with rather naughty names, designed to be dished up in suggestive ways. This book always reminds me of a rather stuffy army dinner party we  went to just after I bought the book.  You know  those moments when the whole room goes quiet and all  that can be heard is one voice? Well that happened to me just as I was telling the woman next to me about the book. My voice  rang out across the silent room,  ".... and of course Penis Pie." The General had to call for another gin and tonic..... 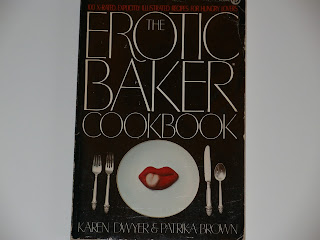 thanks for linking this in, Jane. Have a good one

Jane, I was hoping to contact you to invite you to join Eat Your Books, the cookbook indexing site, but I cannot find contact details on your blog. EYB would help you make better use of your many cookbooks, as you can search your books all at once for recipes. Please email me at info@eatyourbooks.com and I will give you details of our blogger's trial membership.
Thanks, Jane Kelly
Co-founder of Eat Your Books - www.eatyourbooks.com

Jane I discovered your blog only half an hour ago and I love it. I'm lying in bed, here in Brisbane, and I'm going through your archives when I should be up and about starting the breakfast for my brother and his wife who are over here from the UK. They will understand. I love this post going through your wonderful selection of cook books. Gives me envy which isn't a nice fault to have. But what a wonderful collection, leaves me wondering how you travelled with it. Having emigrated years ago where my whole life had to be packed into boxes I can only marvel at your ability to keep your collection going whilst travelling with the forces.
I was impressed with your competition winnings - overseas trips and all. Congratulations.

I have a great tip for anybody travelling with a big collection of books (or anything else for that matter) - get Mark to do the packing! We moved many times and he always did it so skilfully that hardly anything ever got damaged.