Something old, something new

Doesn't it bug you when you have an idea for a card clear in your head and when you make it, it turns out to be nothing like your mental picture? That's what happened with this one - in my mind's eye, the butterfly motif was smaller, and sat more neatly over the doyley, the shades of green matched more exactly and the whole thing looked more elegant and pulled together. I guess that's what you get for lying awake planning cards in the middle of the night when you should be sleeping! 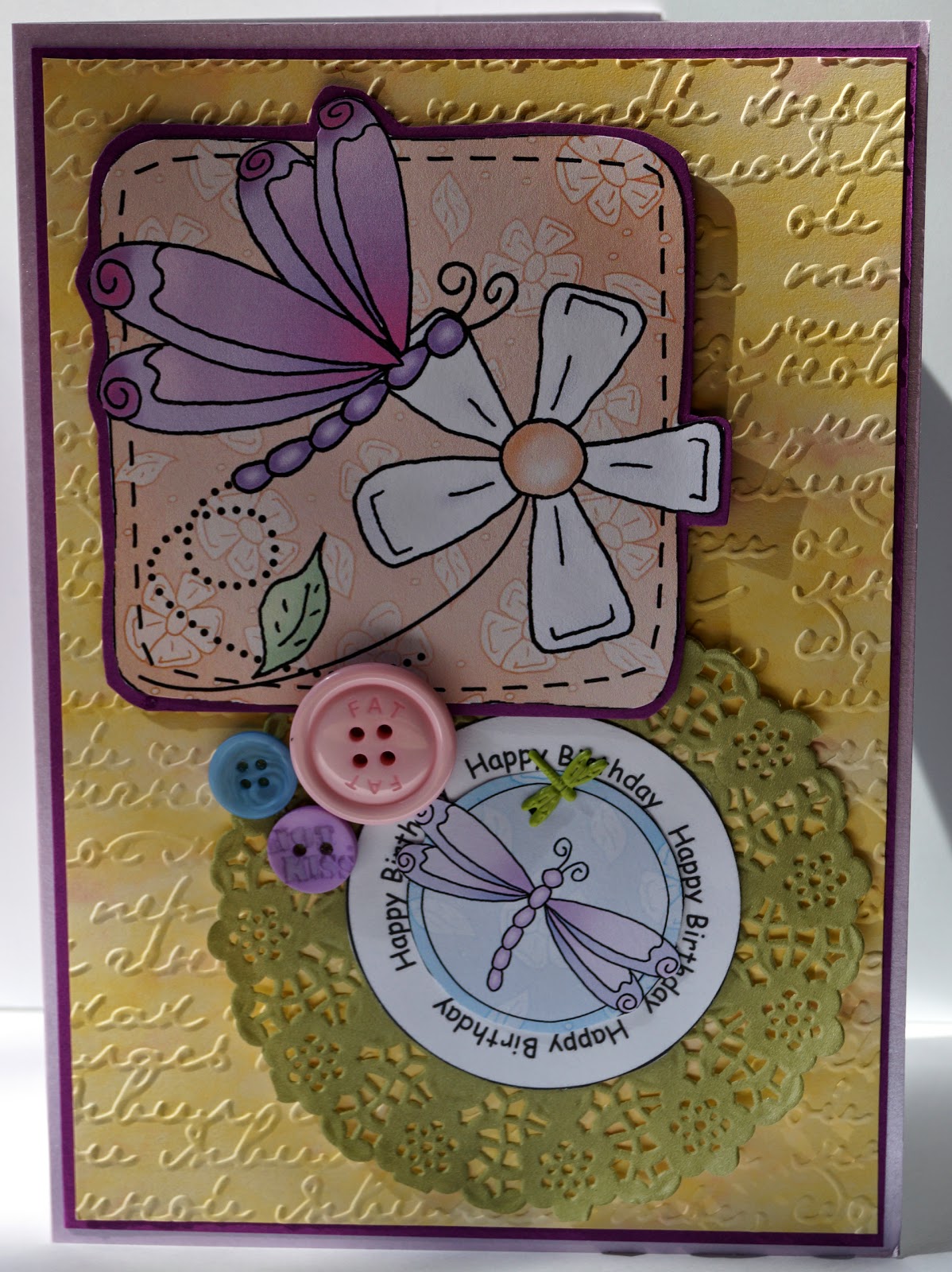 The theme at CD Sundays this week is Something old, Something new  and I've used some of my very oldest and newest items of stash in it. First the CD the butterfly and dragonfly came from is Carol Ann's Studio CD-17, Dragonflies, which was one of the first CDs I ever bought. The lilac pearlescent card I've used for the card blank is about 10 years old, the darker purple card I used for matting is from a box I bought last week, and the yellow card mottled with pink and peach streaks (which don't show up clearly in the photo) was from some I bought on the day before my father's funeral (it's funny the things we remember about times like that!) 15 years ago. But the embossing folder I used to add the script to it with is so new I hadn't even opened the packet! The dragonfly brad is several years old but the doyley and buttons are both very new. And after sticking the buttons to the card, I noticed that the pink one has the word "FAT" on it. Charming!
Posted by Jane Willis at 16:26

This is a pretty card. I like how you've combined the square with the circle. Thank you for joining us again at CD Sunday. Hugs Wynn DT x

A lovely card and you have combined the square and the circle perfectly. Love your script background. Thanks for joining us at CD Sunday.
Christine xx
CD Sunday DT

I usually find trying to plan a card in the night sends me off to sleep and I've completely forgotten what I thought about in the first place so well done for having plan in your head when you woke up. It may not have been exactly what was in your head (are they ever?) but it's turned out brilliantly.
Thank you for joining in.
Beryl xx
CD Sunday DT

This is lovely and you sure have managed to make sure that everything fits in with the challenge, it may not be what you imagined but it's beautiful and now I'm wondering who you are going to send it to and if they'll be offended with the fat button!
Thanks for joining us again at CD Sunday.
Jenny x
CD Sunday DT

Super card Jane. I am a great fan of Carol Ann's Studio Cd's and have quite a few.I am not at home to check but I don't think I have this one.
Thank you for joining in with us.
Carol xx
CD Sunday DT team B

I love it and i do like to see buttons on cards
Thanks for joining us at CD Sunday this week.
sue-b DT

Great card. Just seen you are monthly winner at LIM , big congrats and a lovely prize too.
Lynn x