Last weekend it was the Belgian Grand Prix, so the F1 Foods challenge at Caroline Makes is for Belgian food. 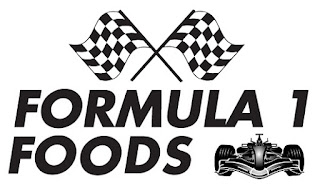 Now I've visited Antwerp a couple of times and enjoyed lots of lovely meals, but not had anything I could say was particularly Belgian. There were lots of street stalls selling waffles, and chips, and of course a lot of chocolate shops, but nowhere that I could identify as a Belgian restaurant.

So I dug out an old recipe book from 1977, by Sonia Allison, simply called "European Cooking". It is divided into countries, and a look through the Belgian section reminded me of lots of possible things to make - Chicken Waterzooi, Oiseaux sans tetes, waffles and of course Carbonnades Flamandes.

As the weather's been cold, wet and miserable, I decided a beef and ale stew was just what we needed, so that was my choice. I've made it before, many times, from other recipes and was surprised to find that this recipe wasn't finished with croutes of mustard-spread French bread, served as a topping, like every other recipe I've seen. Instead, the mustard is incorporated into the sauce and then at the end of cooking, breadcrumbs are stirred into it.

I'm not going to give the recipe here, for copyright reasons, but it is a standard beef-and-ale casserole, with Dijon mustard, white wine vinegar and brown sugar (being diabetic, I substituted dark Sweet Freedom) added and a handful of breadcrumbs stirred in at the end.

The recipe said to use pale ale, but I thought that maybe that was because it was the nearest thing to Belgian Blonde beer that would have been available in the UK back in 1977. I happened to have a bottle of Blonde beer but no pale ale in the house, so I used that instead.

The blonde beer made the casserole very pale, compared to the look of it when I use brown ale or stout as I usually do in a beef and ale casserole. It might have looked more appetising if I'd added a dash of gravy browning. As for the breadcrumbs, we both agreed that they spoiled the lovely rich, smooth gravy texture that is one of the delights of a beef casserole and makes it such a comfort food.

The pallor and the crumby texture also contribute to these being probably the worst two food photos I have ever taken - but at least I joined in! 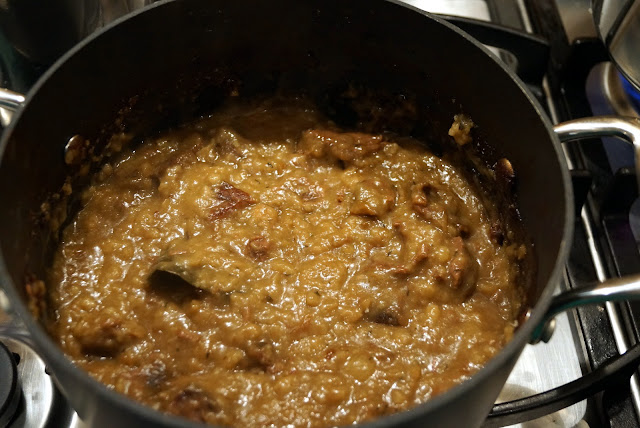 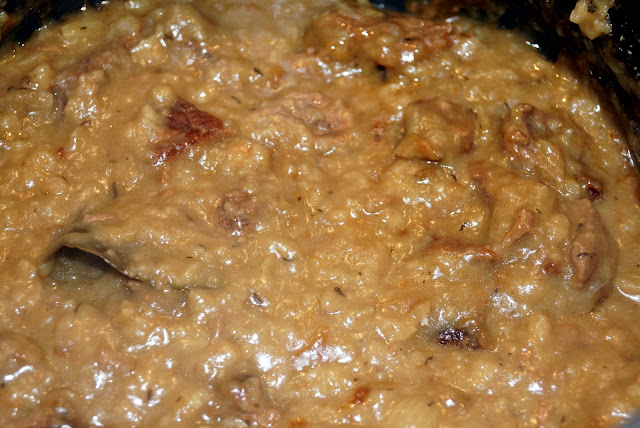 I wouldn't have been able to find one Belgium recipe, let alone a book containing a section of them, Jane! Oiseaux sans tetes sounds pretty gruesome ... what kind of beheaded birds are needed for that recipe, I wonder?!?! I'm sure that the stew would have been lovely without the breadcrumbs ... it looks rather like a meaty bread sauce, especially in the last photo. You'll be sticking to the more traditional beef and ale stew. Elizabeth xx

I'd never heard of this and from the name was expecting it to be a sweet dish but Belgian beer is of course a great ingredient to use for this challenge! Thanks for taking part in Formula 1 foods - I'm posting the roundup today and the next challenge which is Italy.