Inspired by an English Country Garden #7

On our recent trip to West Green House, one particularly striking display was a row of alliums (or should that be allia?) that were really over, but rather than being cut down, had been left to turn brown so their spiky brown spheres contrasted strikingly against the lush green lawns beyond them.

I wanted to try to recreate this with a diecut, but didn't have an allium die - so I've used the Memory Box Chloe die to give a similar effect, adding a sprig of foliage cut with a Spellbinders Sprigs die. The diecuts are a pearlescent dark brown in real life, but I think the reflection from the pearlescence has made them look almost black in the photo. The background is made by covering an acrylic block with green ink and spraying it with water. 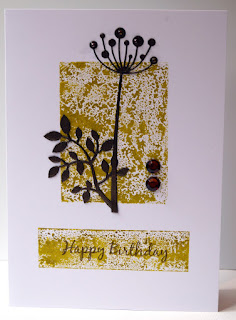 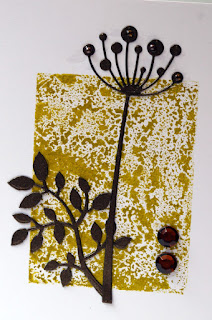 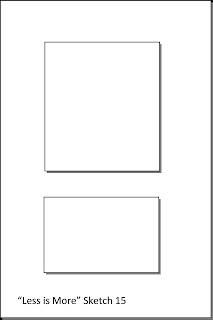 Fabulous Jane, you used a technique for the background I'd forgotten all about :) And the Allium plus foliage is so striking too.

This is fab Jane, love the olive green and black combo. I love alliums as well, I've put my pot in the wild flower meadow to die back as the leaves look so sad but as you say the stems are stunning. :)

Gorgeous colours Jane, they are really inspired by the alliums that have finished flowering! Fab
Thanks for joining us this week
Anne
Less is More

Clever and classy, gorgeous stamping Jane and love your neat background
Great take on the sketch
Thanks so much for sharing and taking part.
Sarah xx
Less is More

Love your acrylic block stamping, gorgeous olive green with the black too.
Thanks for sharing with us.
Anita x
Less is More

wooww that flower DIE I love it
and that olive green background looks beautiful Jane
Love your take on that sketch so clever made
hugs, Monika