This week is a One Layer challenge at Less is More, and the theme is "Fur and Feather"

Now being a cat lover, I have lots of "furry" stamps, and over the years I've also collected lots of  bird  and feather designs, so I thought I'd make two cards, one fur and one feather.

I started off with feather. I rejected all my bird  stamps in favour of this beautiful feather stamp which has been in my collection since about the year 3,500 BC and doesn't get used anywhere near enough. I know how simple and elegant it looks embossed with gold powder (hence my question on the challenge post), so I simply stamped and embossed it on a white card, then added the greeting (remembering to use my stamp positioner this time - I've learned that it is ESSENTIAL for me to use one when making a one layer card, especially for words) then finished it off by ruling lines with a gold gel pen. 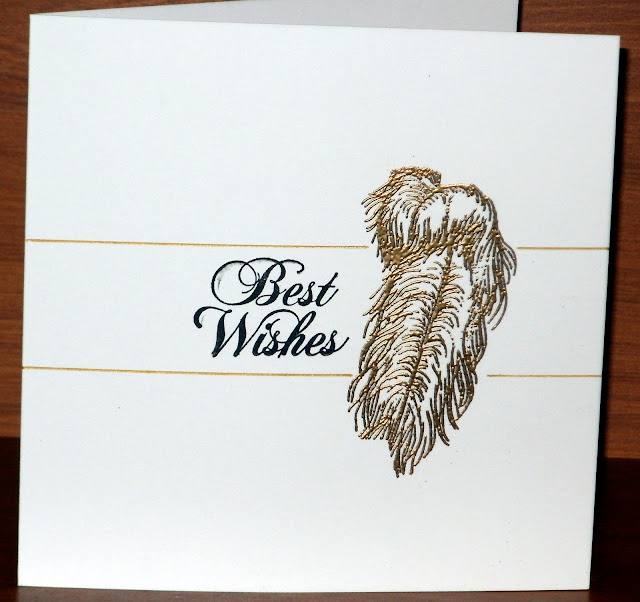 Now on to fur. My plan was to stamp an image of a cat stealing from a milk bottle in the centre of the card, then simply use a Versamark pen to colour in the milk bottle and triple emboss it with clear ultra thick powder to look like glass.

However once I'd done that, it looked TOO simple. Boring. So I thought I'd brighten it up by adding a little colour to the cat with pencil, then using the waste from a die cut circle as a mask to add a subtle "halo" of brown around it.

Well, I haven't used chalk for ages and my chalks have gone all crumbly. And I got chalk EVERYWHERE. It's even halfway up the wall, which was three feet from where  I was sitting. The card was covered in all colours of chalk, and  when I tried to brush them away they just stuck and got stubbornly more and more ingrained. Crafters, don't worry about using chalk fixative - the trick to getting chalk to stay put is to put it where you don't want it. That way it will stay there forever!

The image was fine, and the chalk circle around it worked, but there was no way it would make a one layer card unless I was making it for somebody I hated. So the feather card above is my challenge entry and  here is another instalment  in my occasional collection of "How I used the one that went wrong". It's not CAS, and it doesn't have one layer but I think it's pretty cute. 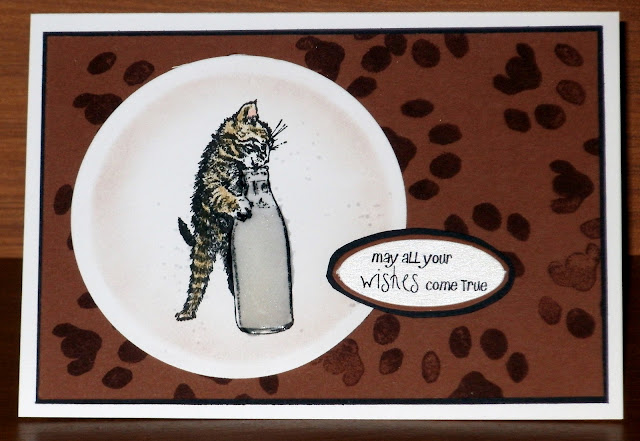 I die cut a second circle around the image to leave a white border. There was one nasty smudge I couldn't cut away - more about that later. Then I stamped paw prints all over brown card - after all, a naughty kitten like that would leave paw prints wouldn't he? I  used a greeting to hide the smudge on  the image. It says "May all your wishes come true" because I can see that kitten is really wishing his tongue was a little bit longer.  And because I wish I wasn't so messy, but since I am I have to learn ways to make the most of it, as I've done here.
Posted by Jane Willis at 16:53

Your LIM card is fab and loved the story as I used chalks on mine and just KNEW what you were talking about hee he, but love the kitten one and that is the perfect sentiment for it! x

That's a pretty feather stamp! Love the embossing too.
Thanks so much
Chrissie
"Less is More"

Two great cards, that feather is so elegant and classic. The cat might not be CAS but its still a fab card XOXO Zoe

That feather stamp is awesome! Great looking card!d Even though the cat card is more than one layer...it's still cute as can be!

They are great cards, Jane! That beautiful feather almost looks like looking down on a Pekingese dog, too, so you have both fur and feathers!! Not that you need it - that cat with the milk is just adorable!!

Thanks very much
mandi
"Less is More"