Getting in holiday mood

Yes, I know we've only just come back from Vienna, but in less than two weeks Mark and I will be off on holiday again, this time to Turkey.

Two years ago I won the Sunday Times Where Was I? competition, when the prize was a trip to Bordubet in Turkey. I'd already won so many holidays that year that Mark had run out of leave (!) so I went with a friend, but knew straight away that it was the prefect place for me and Mark to go, so booked a holiday there last year. And we enjoyed it so much that we booked again as soon as we came home, for the same week this year!

The food at Bordubet is excellent - healthy, fresh and delicious - and one of the lunchtime snacks we loved was a flat bread topped with a spicy lamb mixture called Lammakhun (please excuse my spelling!) so I was delighted to find  recipe for a version of it on page 125 of the October - yes, I know it's only August but I'm a subscriber so already have my copy - issue of Olive magazine, using a pita bread as the base.

The minced lamb is cooked until slightly crispy with onions, chilli, tomatoes, allspice, cinnamon and cumin and a tablespoon of  pomegranate molasses - the mystery ingredient I mentioned recently. I was delighted to find a use for it! The resulting mixture is spread over the pita bases, topped with sliced red onion, or in my case shallot as I'd run out of red onions, and lots of parsley, and seasoned with lemon juice. Then a few minutes in the oven to crisp up the base and they are ready to eat. 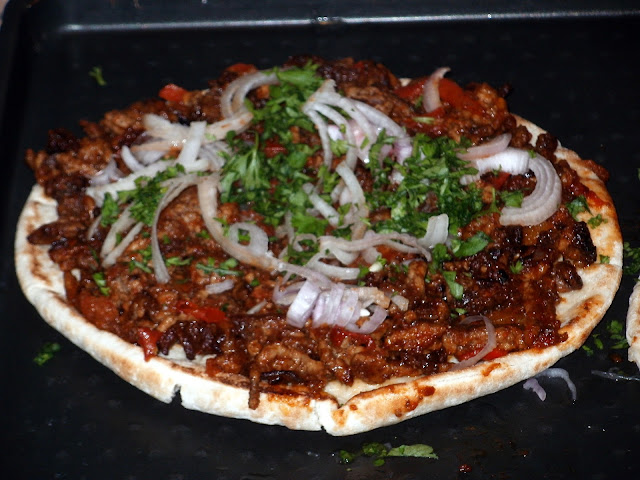 Verdict: not as thin and elegant as the real thing, but absolutely delicious!

We served it with an aubergine salad that Mark concocted, again based on a dish we ate in Turkey. I'll not describe it in detail as he will be blogging about it soon, but here is a sneak preview of the finished dish. 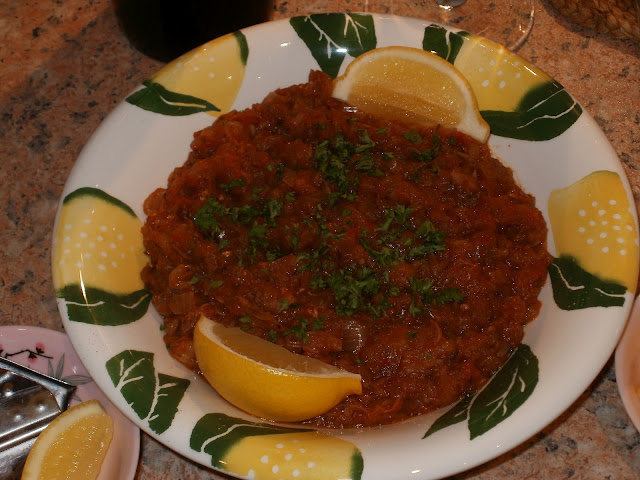 We also had one of Mark's delicious crisp little Lebanese cucumbers, fresh from the garden, and a quick fennel salad I made  - a thinly sliced head of fennel, a  sliced  shallot, a few green peppercorns and lots of snipped chives, with a lemon and olive oil dressing
. 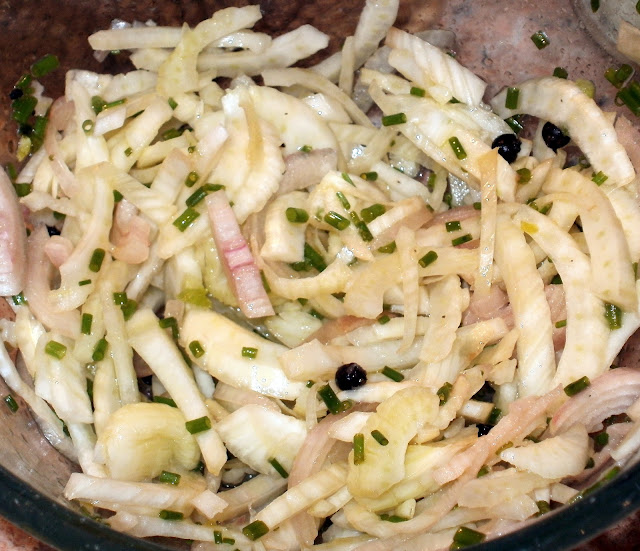 ﻿
Thanks to the copious quantities of parsley and chives, I am sharing this with the Herbs on Saturday link up at Lavender and Lovage. Now you are teasing me, as Lamacun, is MY VERY favourite street food from Turkey and N Cyprus! I remember eating it all rolled up with a bunch of parsley in the middle when I was in Turkey and I JUST love your entry for Herbs on Saturday - thanks so much! Karen