This is the first time I've joined in a "proper cooking" challenge at Belleau Kitchen so I was very pleased to see it is called "Lets start at the very beginning". The task is simple - pick one of your recipe books at random, open it at a random page and cook what you see.

However when the challenge was announced, I was away from home (hence the blog silence over the last ten days or so) visiting my Mum, so I thought that rather than introducing the inevitable bias when "randomly" choosing a book of my own, with my hand tending to hover over a favourite, I would pick one from her much more limited collection - furtively snapped on my phone while she was lost in yet another monologue of wartime reminiscences..... 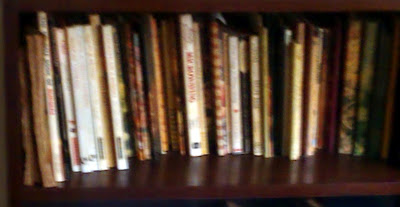 I just closed my eyes and grabbed, and picked out this tiny book, Lebanese Cooking, that looks as if it probably came from the bargain shelf of the local garden centre (one of her favourite sources of cook books in her more mobile days) 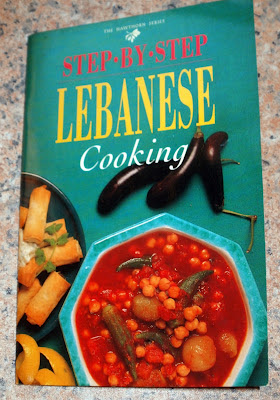 The recipe it fell open at was Chicken with Lime and Spices - chicken marinated in lime juice, mint, ground coriander, ground cumin and turmeric and then fried, and served with hummus and pita bread. 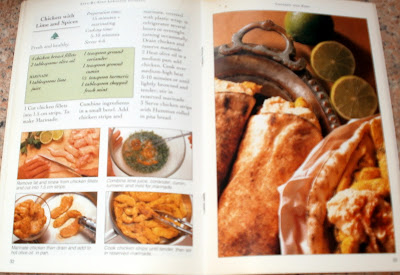 Since it was such a simple dish, I also used their recipes for the hummus and pita. I liked the hummus - I usually use tinned chickpeas and am always impressed by how cheap it is compared to the bought stuff (which incidentally always gives me an odd headache right in the top of my head - does anyone know what mystery ingredient causes it?), but this recipe uses dried ones which work out even cheaper. If ever I need an extra income, remind me to set up a hummus factory. It was also very lemony and included no sesame seeds or tahini, which made for a more refreshing version than my usual one,  and I will use this recipe again when cooking for friends with sesame allergy.

The pita breads were much less successful, going dry and crispy before they were cooked through. I think I will go back to my usual trick of making a naan dough and shaping it into pita sized breads! The recipe said the chicken and hummus were to be rolled inside the pita, but since that was impossible I dished them up side by side. We had lots of green salad with it, and some cucumber sticks to dunk in the hummus. The only change I made to the recipe was that the instructions told you to add the marinade to the chicken dish immediately before serving. Eeek! Add liquid raw chicken has been sitting in for several hours to a fully cooked dish? No thank you..... I added it as soon as the chicken was browned and let it caramelise on the outside of the pieces instead. I checked the publication date of the book and it was 1996 - surely after the first salmonella scare that taught us that everything to do with poultry had to be fully cooked? 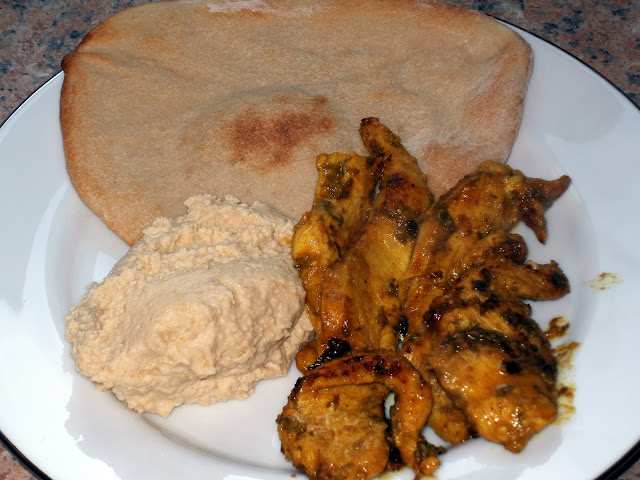 Verdict? The chicken was lovely but not the kind of thing I would normally  have used a recipe for. In fact, looking through the book, I would say the same about most of the recipes. Although if the aubergines being grown by my husband come to anything, I will be trying the tasty looking Eggplant and Tahini Dip. 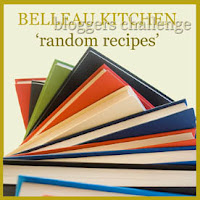 well this is exactly what random recipes is about, exploring books and recipes we would never usually make... I must say both the chicken and the humous look very good, I particularly like how spicy the chicken looks, bet the kitchen smelled amazing!... shame about the pitta but I think these things can be so tricky the first time.... so happy you've taken part again, thanks for the entry x

I have this book in French! I have never tried the chicken dish but will give it a go now. It is my go-to recipe for houmous. I make the aubergine (eggplant) and tahini dip at least twice a month during the summer - it is delicious.