A Comfort Dish for a Cold Day

Many years ago,my husband and I went for a short break in the Lake District  - it's so long ago that it was the first time we left the children with their grandparents and went away without them. Those children are nowin their thirties! We stayed at a tiny guest house, so small that they could offer no choice at mealtimes, and many miles from the next place to grab a meal,so wwe were stuck with whatever was served.

And one evening we both groaned in  disgust when we saw steak and kidney pudding on the menu. Apart fromthe fact that neither of us likes kidney, we both had childhood memories of grey, flabby suet pastry enclosing tough, grisly meat.

So we were both surprised and delighted by the light, crispy, golden pudding set in front of us. OK, we still had to pick the bits of kidney out, but the beef was tender and unctuous, the gravy rich and comforting. Wonderful! So wonderful that we asked how they had made it so much better than any other we'd ever tried. "The secret, " we were told, "is to steam it for at least 5 hours, whatever your recipe says." 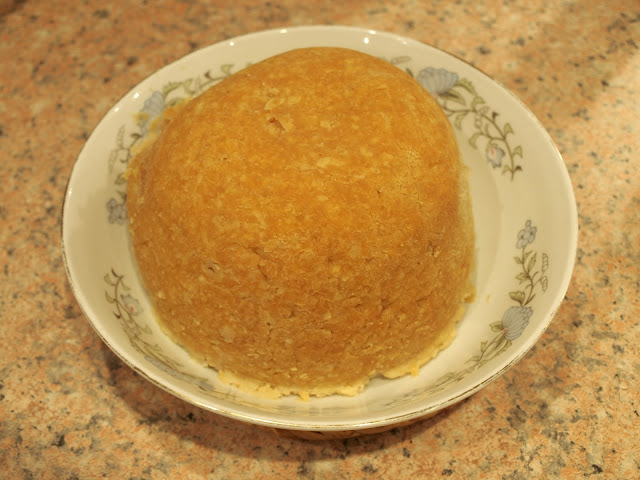 When we got home I checked several recipes- most gave a cooking time of around two  hours. So I tried one, cooking it for five hours instead and leaving out the kidney. It has become a firm family favourite, and an ideal winter dish. I know it means starting to prepare it a long time in advance - ideal for me as I work from home so I can take a few minutes (and a few minutes is really all it takes, probably less time than it takes to read the recipe!) to put it together early in the afternoon and then just leave it to look after itself for the rest of the day. Totally imparctical if you get home from work at 7pm and want to eat at 7.30 though! But there are always weekends.....

So this is how I make it. This pudding serves 3-4 and can be made in a 1-litre pudding dish, which should be well greased.  You will need a deepish steamer, the kind that sits on top of a pan of boiling water.  Bring the water in the pan to the boil while you prepare the pudding.

For the filling, you will need about 500g of stewing beef, trimmed. Pop it into a plastic bag with a heaped tablespoon of plain flour and plenty salt and pepper, and give it a good shake to coat the meat.

Now take 200g of self raising flour, 100g of shredded suet and a pinch of salt. Mix them all together then stir in enough cold water to give you a pliable dough. Roll it out into a circle - for the size, try to picture your pudding basin "flattened out"  so that the centre of the circle would be in the middle of the bottom of the basin and the edges of the circle just beyond the rim.

Cut out a quarter of the circle and set it aside, then line the basin with the bigger part, sealing the edges  together with a little water. Now tip in the contents of the platic bag, surplus flour and all, and fill the basin almost to the rim with cold water.

Re-roll the suet pastry you cut away to make a circle to cover the top of the pudding, put on top and seal the edges with a little water. I usually just use the splashes  on the edge from when I added water to the filling.

Now take a square of  greased greaseproof paper about 20 cm wider than  the widest part of the bowl and  make horizontal and  vertical pleats in the middle. Place it over your pudding and smooth it down, then tie in place under the rim of the bowl with string and trim off the excess to about 2cm from the string.

Place in the steamer  and steam for at least 5 hours, remembering to check the water level in the pan and top it up from time to time. To serve, remove the paper and string, gently loosen the edges with a palette knife and invert on to a deep  plate or bowl.

I like to serve it with a winter vegetable like cabbage, sprouts or leeks,which canbe steamed in another tier of the steamer towards the end of the cooking time. My husband likes some boiled potatoes with it too. 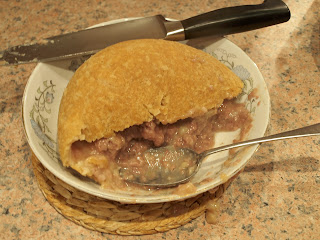 I endorse everything Jane has said about this steak pudding! It really is one of our favourites now.

It's not the right time of year for this here but I do want to give this a try next winter so I am going to pin it to my recipes to try board. I will probably include the kidney - just a bit. Have a good week.

I grew up in the USA but my mother was from UK and would make this often. I LOVED this a a child!!! And still do.

Jane, this is a goodie for this Food on Friday. Thanks for linking it in.