If you are a regular visitor to this blog, you will know that every year we have a roast ham joint on Boxing Day. I wrote about my plans here  and you can see this year's meal on my husband's blog, Mark's Veg Plot.

The day after Boxing Day, we had ham, egg and  chips  and there have been a few sandwich meals, but there was still plenty left. I'd also bought far more parsley than we needed for the parsley sauce, so I decided to make a rough and ready version of a classic jambon persillée - ham in a parsley jelly. 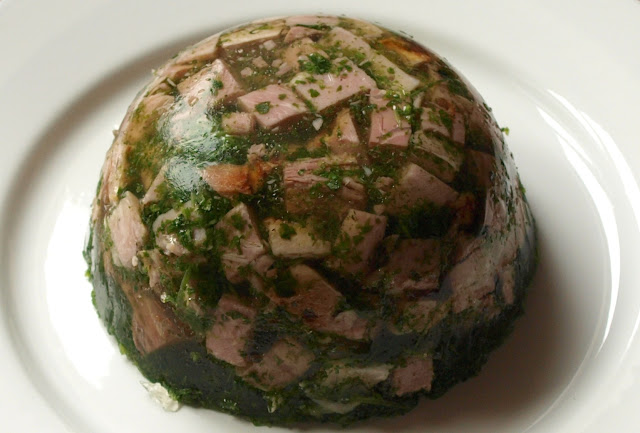 First I diced enough ham to fill a small bowl, then tipped it into a larger bowl and mixed it with chopped parsley before returning it to the small bowl. Then I estimated the amount of  liquid it would need to fill the bowl - it took around 350ml - and used bottled chicken stock concentrate to make a light stock, which I used to dissolve three sheets of leaf gelatine (the quantity you need varies according to brand - check the pack instructions). When it was cool and on the point of setting, I poured it over the ham and parsley and left it overnight to set.

A true jambon persillée would be made with a mixture of home made stock and wine, but when I have used ham stock in the past we have found it too salty, and my home made chicken stock tends to have so much flavour of its own it would swamp the taste of the ham. As for the wine...... well,  there was none "spare" (Hic!) but I don't think it really adds a lot to the dish in this case. 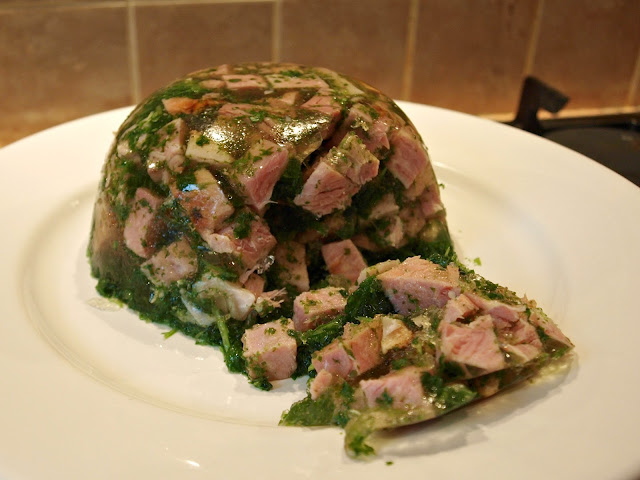 We've had this for lunch today with the remains of some salad,  home made pickled pears and some home made rye bread. And there's plenty left for tomorrow! 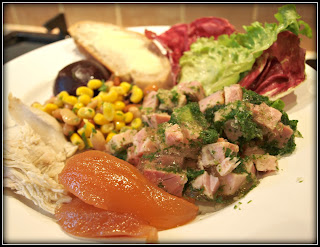 I'm submitting this to the No Waste Food Challenge at Turquoise Lemons -  where the challenge is Christmas leftovers. 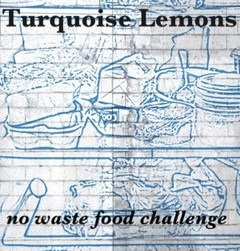 What a fab recipe for using leftover meat and perfect to grab a bit each day for packed lunches! Thank you for entering the No Waste Food Challenge