This week's fruit box included lots of pears - well over 1kg of still-firm but beautiful specimens. Since we still had a few ripening from last week's box, I decided  to make a treat for my husband  - pickled pears, one of his favourite accompaniments to cold meat.

First I prepared the lightly spiced vinegar syrup. I used a 500ml bottle of white wine vinegar, 600g of granulated sugar, and a cinnamon stick and a few cloves tied in a piece of muslin  J-cloth, bringing it slowly to the boil to dissolve the sugar then removing from the heat and setting aside for the spices to infuse.

Next the peeled, cored and quartered pears were poached gently in water until soft but not falling apart - it took about an hour. 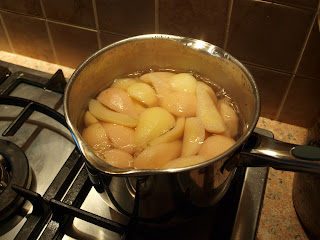 Next, I drained the pears and added them to the spiced syrup, and cooked them again, this time for about 40 minutes, until the pears had turned translucent. Just look at the lovely pink colour they acquire! I'm not sure how  white pears,white vinegar and white sugar combine to produce pink, but it's all part of the glorious alchemy of cooking. 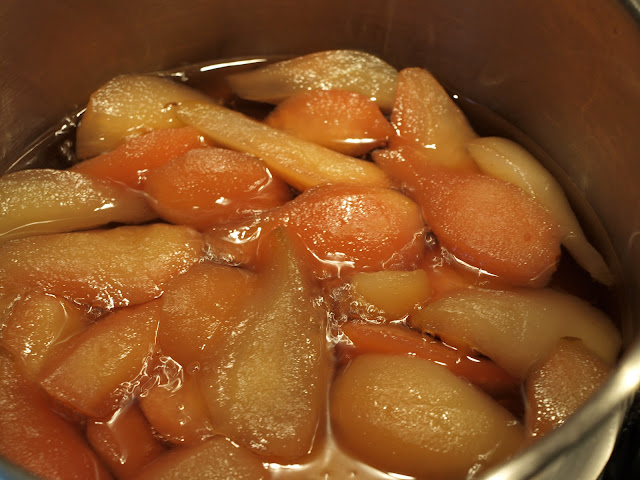 Meanwhile I warmed some jars - far too many as I'd forgotten how much the pears seem to shrink during cooking. I lifted the cooked pears from the syrup and placed them in the jars, discarded the spices and poured over the syrup to fill the jars. 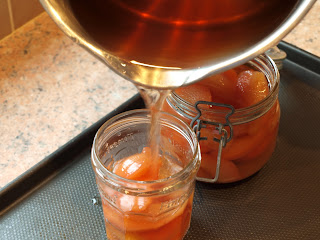 Now the hard part ...... ideally they need to be left for a month before eating, but I know that after Boxing Day's baked ham, Mark will want a pickled pear with his next-day cold  ham! 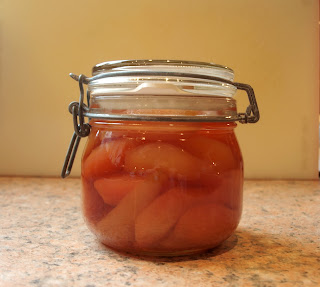