A sprinkling of fairy dust

Today I'm heading over to the Sisterhood of Snarky Stampers, where the new challenge is L for Legend.  Not just ancient Greek or Norse legends, but any kind of mythical or magical creature. So I decided to go for fairies, and printed out some papers, decoupage and a background from the La Pashe "Gnomes and fairies" CD to use with a stamped sentiment from one of the wonderfully snarky Dylusions sentiment sheets - this one is from "Say it how it is".

When the CD came out, a couple of years ago, La Pashe brought out special aperture cards to go with the decoupage, but I didn't get any. They had windows in the first two panels, instead of just the middle one, and a double score about 3mm apart for each fold. The idea is that the decoupage is double sided, so by adhering the acetate behind the centre panel, which becomes the front of the card, then using foam pads to attach the reverse panel to it, there could be decoupage on the BACK of the image while still allowing the card to close.

Anyway, since I had none, I rummaged through my stash and found one that had the double score lines but a closed in end panel, so I had to butcher it a bit to create the right effect. Hence any failure of edges to line up is entirely my fault. 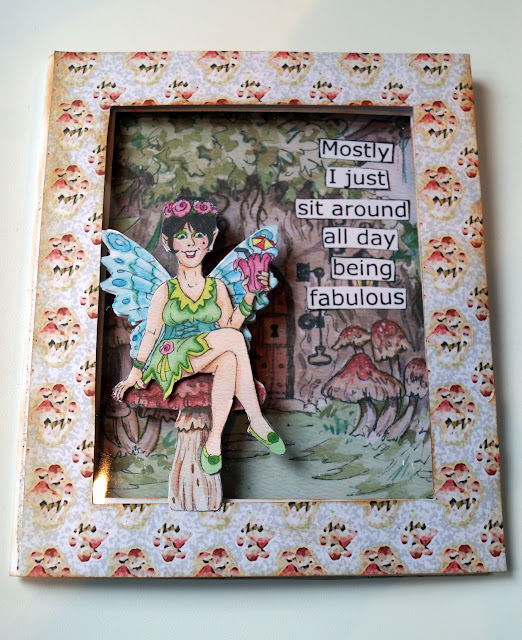 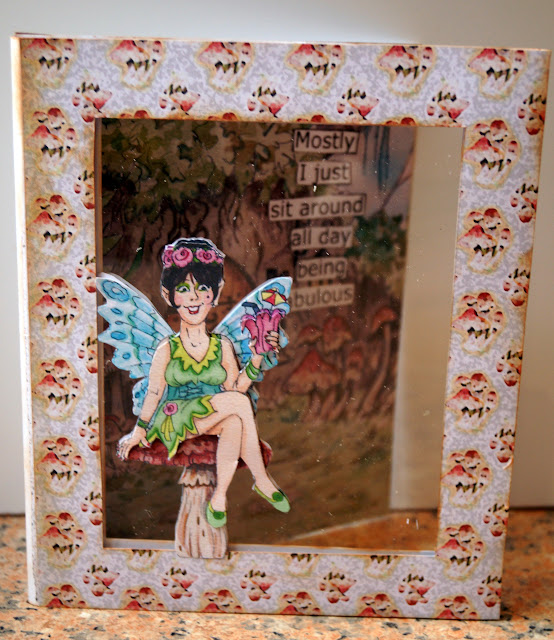 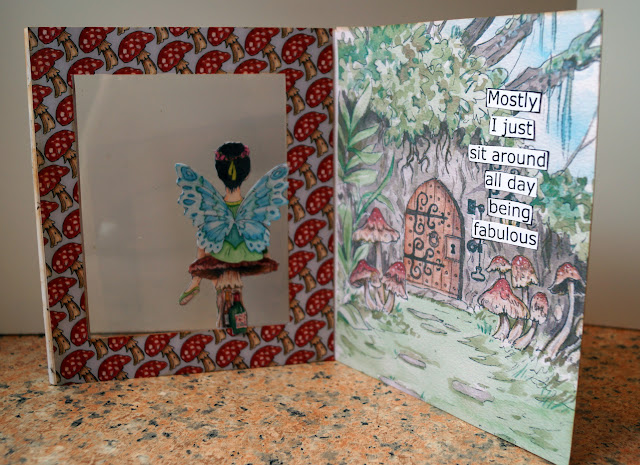 Looks like you lined up everything perfectly to me. Such a funny card, thanks for highlighting her secret stash! Cara x

This is awesome Jane! I love her secret hidden bottles! And the card opens up and lines up beautifully!
Thanks for joining the sisterhood of snarky stampers for L is for Legend!!

How clever. It looks great and I love the sentiment. She looks as if she belongs in Pixie's treehouse. Barbxx

I think the card looks great and now I want to try this style too. I just might have to include some tiny bottles of fairy booze. Great card, Jane! Thank you for playing in our "L is for Legend" challenge at the Sisterhood of Snarky Stampers!

Gorgeous card, love the style love the fairy, thanks for playing along with us at the sisterhood of snarky stampers for the L is for legend challenge.

Fun! Loved that the fairy had a front image as well as a back image. What a treat for the person receiving this fab card.

Isn't that what we all do... when we're not making cards? :D This is brilliant! Love all the details. Not to mention the stash sh has hidden behind her! Thanks for joining the fun at the Sisterhood of Snarky Stampers!

Beautiful card. Thanks for joining our Legendary challenge at SoSS