Pears and blue cheese on toast

I'm having a bit of a posting binge today - it seems to be feast or famine with me! And it occurred to me that I've STILL not got back into the habit of posting about food, so here's a baby  step in the right direction.

Back in the 1970s, when I was at University and in the Officers Training Corps,  formal dinners often ended with a course called the Savoury, a very small savoury dish that was often intensely salty. Anchovies and anchovy paste used to figure a lot in them, as did bacon and strong cheeses. The salty ingredients were often combined with fruit, for instance bacon wrapped around prunes (I can't remember whether they were angels on horseback or devils on horseback, one used prunes and the other kidneys).

Really the only vestige of that left now is cheese and biscuits, but there is one simple savoury that Mark and I still like to end a meal with from time to time. We don't eat it in tiny canapé sized portions though, because we have it  instead of dessert rather than as well as it - Pears and Blue Cheese on Toast.

For two people, you will need:
2 small or 1 large (halved) slices of fruit bread - I used home made "hot cross bun loaf" which is simply made by sticking all the ingredients I would use to make hot cross buns in the bread machine and cooking on a normal cycle.
1 ripe, but not over-ripe, pear
about 70g Danish Blue cheese, sliced. You could use any blue cheese, but the strong saltiness of Danish Blue teams well with the sweetness of the pear.

Toast the bread under the grill on one side only.
Peel and slice the pear and arrange the slices over the untoasted side of the bread. Top with the cheese and return to the grill. Cook until the cheese is melted and bubbling and any exposed bread is toasted.

Serve as a savoury or with a green salad as a light lunch. 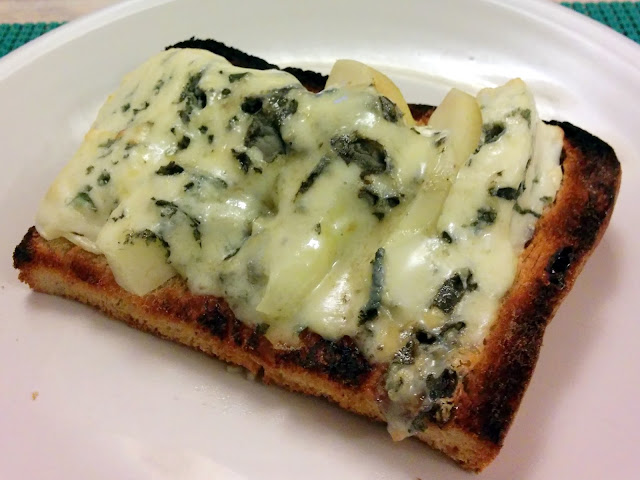 Oh I remember the savouries really well too. Happy days!

This looks lovely - just my sort of food! Curry for us tonight too, Di!
Kath x

Yum! I've recently fallen back in love with pears, but only the Comice ones which seem to have come to the end of season. They're the only pears I manage to but that ripen nicely. All the other are rock hard for weeks and then have suddenly rotted in the blink of an eye! Cara x