My journey through old kits continues.... today was the turn of a Kanban kit that was crammed with luxurious looking foiled cards and glittered acetates in sumptuous brocade designs. Each element in the kit is gorgeous in its own right, but when it comes to putting them together I'm at an absolute loss to know what to do. However in the past I must have dome something because all that is left of some of the purple and gold sheets is a handful of snippets.

Or rather, all that WAS left, because those snippets found their way onto this card. 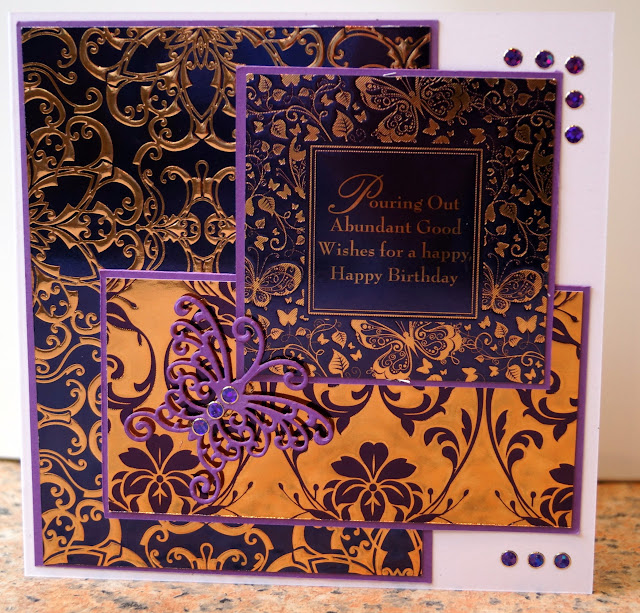 The gold part of the design is rather a pinkish shade of gold, more of a rose gold. Which meant of course that it didn't work with any of the gold I had lifted out for matting. However a delve into the snippets box brought up a few odds and ends of purple card, just enough - and I mean ONLY just enough! - to mat everything and die cut a butterfly. The "gems" are actually holographic peel off dots left over from a different kit.

I'm sharing this at Pixie's Snippets Playground where I was delighted to be one of last week's picks. This week it's the Easter Holidays so who knows what shenanigans the playmates will get up to?

I did make two other cards while I had the kit out, but they flatly refused to be photographed. My camera simply couldn't focus on the acetate I used for one, and when I focussed it manually it said "You've got to be joking" and reset itself. While the other was loaded up with so much reflective bling that you could see me and the camera all over the front of it rather than the card itself.

Well your picture makes it look like a very opulent card instead. That sentiment is FABULOUS.

Fabulous card Jane - it really looks so rich! So funny about acetate reflecting - it's a pain in the rear end when I try to take photos of the weekly prizes that are in cellophane bags. If you look closely you'll usually see my hand and the camera reflected! :)