A recent challenge win from CD Sundays included a lovely pad of Tonic Studios papers, called Winter Wonderland. The shades are muted and earthy, ideal for masculine cards, and many of the designs aren't overtly Christmassy, so can be used on cards for other occasions. But the first paper I chose to use from it has a definite festive touch as it is scattered with snowflakes.

I combined it with snippets of black and kraft, on a red base card, and I actually inlaid the die cuts, for a change, because the patterned background showing through the cut out areas made it look a bit blurry. I don't like inlaying them though, I think next time I want to combine this die with a patterned paper background, I'll add a plain contrasting backing paper behind the cut out areas instead (which will also give me the advantage of having the letters left to use elsewhere) 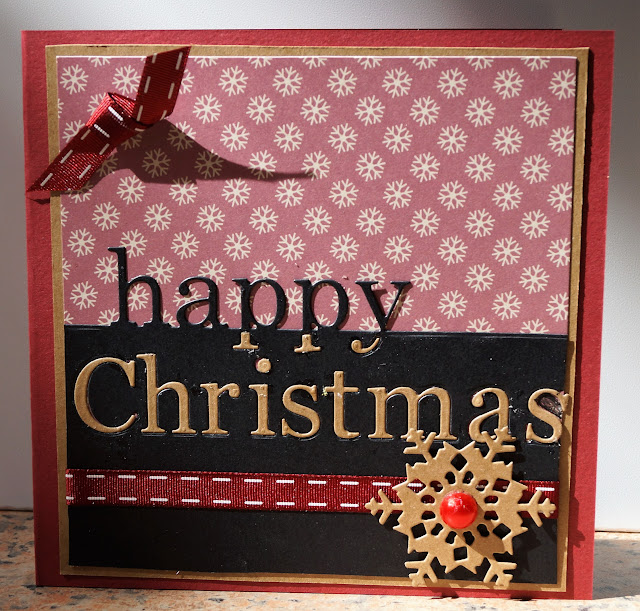 I took the photo yesterday in the late afternoon when the sun was low in the sky and it's cast some strange shadows - that ribbon knot at the top looks as if it stands out several inches! I promise it actually lies pretty flat.

kraft goes great with red ... pretty pattern too ... so glad you joined us with your RED at Jingle Belles.

Hooch? Did someone say FREE COCKTAILS? Yes, I'm back for a week!

Great card Jane and I personally love the inlaid letters. Although, having a set left over for another card is such a clever idea! Those papers were such a great prize as well.

Great to see you in the Playground, I had a day off yesterday so am catching up now with commenting :)

Great use of the colours love your card.

Lovely card, I do like the use of kraft card. Cara x

ohhhhh what a beautiful card, and a great use of the fab new papers AND the cleverly inlaid diecuts! (which... yeah... i love SEEING those cards but found i didn't enjoy the "process" lol) you've done BRILLIANTLY here! thanks for celebrating all things *RED* with us at JINGLE BELLES! :)

Your card is lovely. This is such a great die...

I really like the way you've used the die inlay technique here - such a lovely card. Thanks so much for playing along with our colour challenge at 52CCT this week! Deborah, DT.