Age is just a number

The August challenge at Naughty or Nice is "Your number's up" - they want to see numbers on our cards. Instead of going down the obvious route of a card with an age on it, I decided to make a number themed card. I stamped the sentiment, from Rubber Dance, then masked it off while I used Versamark ink to stamp the number panel from PaperArtsy over it three times. Then before removing the masking, I brushed all over the Versamark stamping with a blue-green mica pigment powder.

The background paper is from an old K & Company compilation stack. It was sheer luck that they seem to have used an almost identical typeface to the one on the stamp, and that the background colour was such a close match to my mica powder! 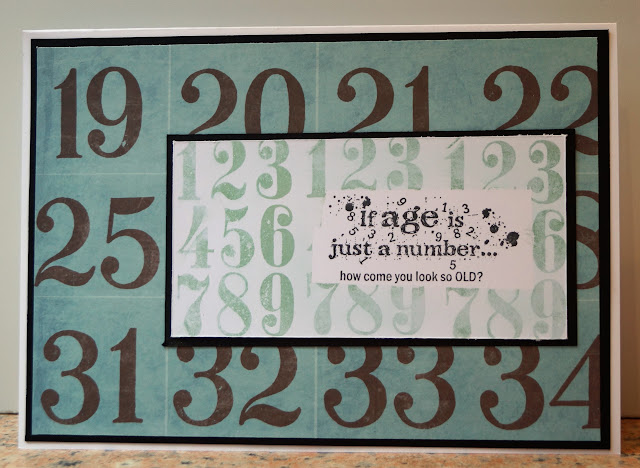 I am also sharing this with Mod Squad, where I got the idea for masking the sentiment  rather than layering it from the current Bordered Sentiment challenge.
Posted by Jane Willis at 14:53

Ha ha ha, love the sentiment, Jane! A great card for our 'You number's Up!' challenge, Jo x

Super cute!!! Thank you for joining us at Naughty or Nice, good luck!!! Amy DT

Another fab card, you're obviously on a creative roll at the moment! Cara x

Hey, this is a great idea for a birthday card. so many of my friends don't want to be reminded of the numbers. You did it without the flowers. Yeah! Thanks for joining us at the Mod Squad Challenge this week.
Barbara, challenge host

Oh how I love this! That sentiment cracks me up! Love how you did the masking for the background, too. Thanks for joining us at Naughty or Nice Challenges! (You just might want to check today's winner post, just sayin'...)

Hahaha your sentiment is hilarious! Thanks for playing along at Naughty or Nice :)

Ha! Love the sentiment! Great card as always! You are awesome! Thanks for joining us at Naughty or Nice! Cyndi, DT

Love that sentiment!
Thanks for playing along at Naughty or Nice Challenges!😀