Edna has really pulled out all the stops for us this time at the Sisterhood of Snarky Stampers and come up with a real humdinger of a challenge - I for Inappropriate  (I'm having one heck of a job spelling that word and it isn't even wine o'clock yet).

I've got some pretty inappropriate sentiment stamps, but  after a hilarious two hours  *ahem* five minutes perusing a Pinterest search for "inappropriate humour" I decided to generate my sentiment on the computer instead. I'd intended to use it with one of the images from Joanna Sheen's "Viva La Divas" CD, so I edited the sentiment, already pretty inappropriate, that came with the image, printed it out - and then decided to just chop the words off and use them with a stamped image instead. It sometimes happens that way, doesn't it? The plans are heading off in one direction and the inspiration is steaming away in quite the opposite.

Anyway, I teamed it with this stamped image, a Crafters Companion one which I think is called Scruffy Little Cat, and some background paper from my stash which I think I must have printed off from a CD about 500 years ago because I can't remember which. 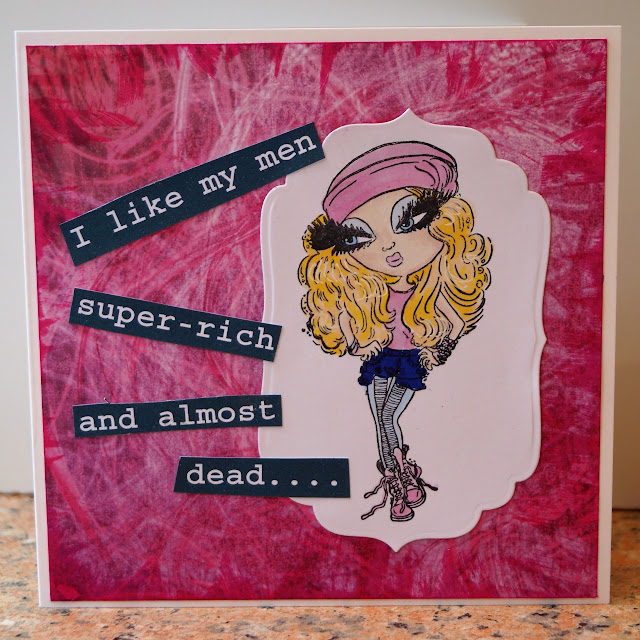 And now I have absolutely no idea who I could send it to - perhaps a girlfriend who had just split up from her man and needed some advice on how to choose the next?

Disclaimer - this card was absolutely NOT inspired by remembering the news headlines earlier this year that a certain blonde, leggy supermodel had married an obscenely wealthy and extremely old press magnate <expires in fit of coughing>.

I am absolutely BURSTING with ideas for this theme, but I'm a bit idea-rich and time-poor at the moment - I hope to get chance to do my full three entries to this time's challenge but I can't make any promises.
Posted by Jane Willis at 11:55

A really fun card Jane. Your image looks a bit like her to hehe! Barbxx

This really made me smile. xx

Woot woot woot
Love your card for the I is for Inappropriate challenge Jane!
Thanks for coming back to the sisterhood xxoo

Excellent - sooooo funny! Thanks for playing along with the Sisterhood, Jo x

Like *cough* who? I can't think who you could possibly mean!

No idea who on earth you could have been inspired by ;-) great card and brilliant sentiment! Cara x

Absolutely inappropriate Jane! And that's what we love you. :) Perfect image and sentiment. Thanks for joining the fun at the Sisterhood of Snarky Stampers!

Oh yeah... nodding in agreement with your fictional and coincidental card/sentiment!

Absolutely inappropriate and brilliant! Thanks for joining our fun at the Sisterhood of Snarky Stampers!

Great job. Love the sentiment with the image. You can send it to any friend... I am sure they will laugh. Thanks for being inappropriate with the Snarky Sisterhood.

BAAAA! HAAAA! HAAAA! SNORT! Giggle... wheeeeze.... this is WONDERFUL! I am sooo making one just like it for myself and I have the PERFECT person to give it too... grin! I am so glad you are officially a Sister now because I LOVE how your brain works! Grin Thank you for sharing your awesomeness with us over at the Sisterhood of Snarky Stampers for the "I" is for Inappropriate Challenge.