Metal, heavy or not at Twofers

It's the third Saturday of the month, and that means it's time for a new challenge at Twofers. It's Zoe's turn to choose the theme, and she has picked "Metal, heavy or not". You can interpret that however you like as long as you include some stamping and no digis. Do please pop over to say hello, see the team's inspiration and join in. We still only get a small handful of entries, so you'll stand a very good chance of wining our fortnightly prize of a $20 voucher for Alleystamps.

For my card, I chose a heavy metal key charm (not the head-banging type of heavy metal!) and dug out a NBUS set of stamps from the Stamp Bug. This was one of their club sets and I can see from the card inserts that it was produced in 2008 - and the red rubber was still uncut. Naughty me!

I made the background for both  the card and topper by swooshing a bundled Sage Distress Stain over white card, and for the main card I then splodged the stain on randomly to give some splashy circles (swooshed, splodged and splashy are, of course, technical terms). I also unearthed a piece of Stampboard that's been lurking at the bottom of a drawer for many years, and gave that a quick swoosh too. And as I had no matching ribbon, while I was swooshing, I swooshed a piece of white organza ribbon to match. There was a whole lot of swooshing going on!

Then I stamped the main keyhole-and-script image on the topper card, keeping it over to the right to leave space for the key, and the word "Mystical" and some random bits of keys on the Stampboard. When all the inks were dry, I used foils and a Tonertex pen to edge and highlight some small areas of the image, word and edges of the topper and Stampboard. I got the two-tone effect by starting with a dark brown metallic foil and then reapplying Tonertex to the edges and foiling again with a copper-gold foil. Apparently foiling is going to be one of this year's Big Things, and you can get hold of everything you need from Foilplay  if you are in the UK.

I reckon the colour scheme and metal give this a very masculine look - I wouldn't normally have used organza ribbon on a male card, but actually if you see it in real life, the distressed effect on the ribbon tones down the "girliness" of it - the photo doesn't do justice to that. 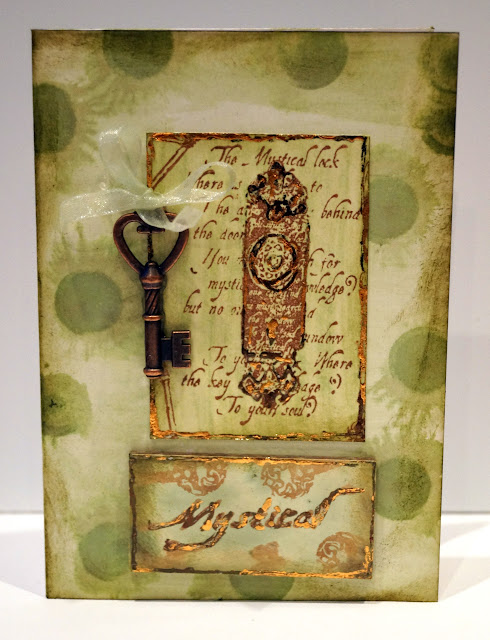 Love the weathered rugged look of this card and the element of mystery the key adds. Thanks for sharing at The Male Room.

This is really super. Love the papers and that key is fab! Thanks so much for playing along with our Anything Goes challenge at The Male Room this week! Deborah, DT.

This is fabulous Jane, a lovely vintage feel.
Pauline
x

Love the metallic accents and the key. Love the pretty bit of ribbon too. Thanks for playing along at ATSM.

You had not used that stamp set before! shocking might be my favourite from the club it is certainly up there. As for the Swooshing you had me happily rocking along. Your cards are always terrific Jane and this is no exception it is fab. XOXO

I Love your card AND the ribbon :) I hope you play Addicted To Stamps and More.

Beautiful as always! So much detail!! I hope using metal flakes is the in thing this year as I have a whole bunch from when they first came out :) And I was swooshing right along with you ~ xoxo

Great card for a man!
Thanks for joining us at Fantasy Stampers challenge

Great Card. Thanks for joining us at The Crafter's Cafe this fortnight for our "Male Cards" challenge. Don't forget to join Blog Hop!

Fabulous workmanship. Great card. Thanks for joining us at Fantasy Stampers. Caz DT

What a stunning card; I really like how you've used these elements to make a card perfect for a man. Thank you for joining us at the Crafter's Cafe! Best, CG