Well, here I am at last! Would you believe it, I've been meaning to play along with What's On Your Workdesk? Wednesday ever since the day I started this blog almost four years ago - and at last I've got a round tuit.

I need to start with a confession, though. My spending ban, only declared when I wrote my crafting resolutions at the weekend, has already bitten the dust. I went into Guildford this morning and spotted a shop called Tiger that lured me in, and discovered that they had a small and bargain-packed range of craft goodies. Reels of ribbon for just £1, flat backed gems, beads, patterned foam sheets..... oh dear. But I'm sure you'll all agree that grabbing an unmissable bargain doesn't count as breaking a ban! I was actually very restrained but only because I had a lot to carry. All I bought was 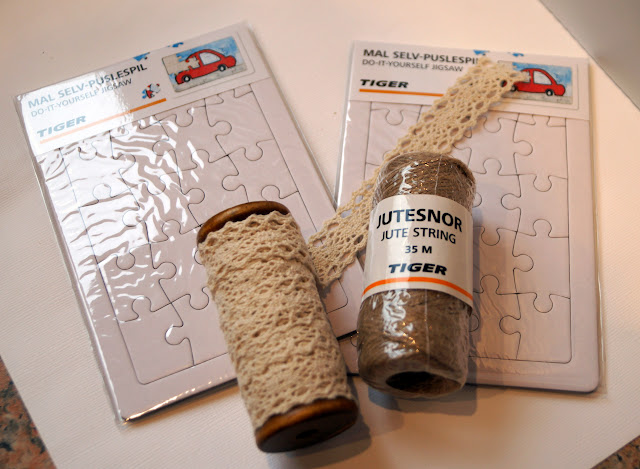 Two make-it-yourself jigsaws for £1. I can visualise these inked and stamped, and they are small enough to actually use as part of a greetings card or to decorate a box top.
A roll of jute string, also £1
a 3m roll of cream lace on a real wooden bobbin for just £2. I may have squealed in excitement  in the middle of the shop when I saw the beautiful bobbin!
So they are on my workdesk, awaiting new homes in my drawers. Also there is a selection of Graphic 45 Precious Memories papers, all ready for me to start fussy-cutting them for my next project, which I'm hoping to start work on later today. You'll also notice THREE bottles of white PVA glue. Maybe it's a bit excessive, but by having several open at once there always seems to be ONE with a reasonably functioning nozzle! 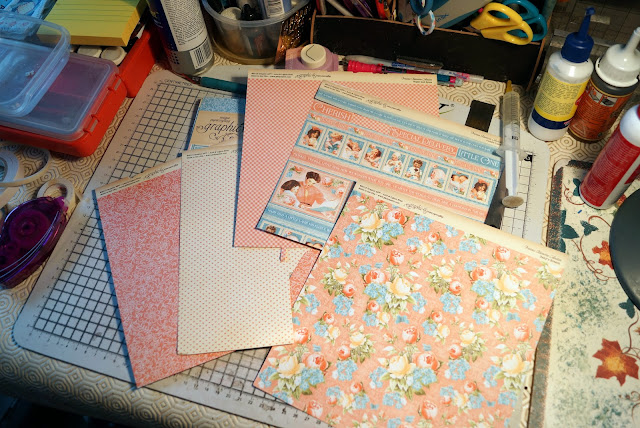 And now I'm going to slip over to the Stamping Ground, head hung low, and make a very embarrassed apology for turning up almost four YEARS late!
Posted by Jane Willis at 12:33

Hi Jane and I think you did really well restraining yourself in Tiger. I do love that lace. The papers look gorgeous. Now I wait to see what you're going to do with them. Thanks for visiting mine earlier and leaving a comment. Like Arnie "I'll be back". Barbxx

Inside the artists shed said...

That's funny. I went into Tiger this morning to escape the banging at home and saw all of your buys but I told hubby I couldn't buy anything even the little drawers that I thought would be reslly useful x Jackie 26

I totally understand about the glue. Somebody needs to invent a nozzle that works longer than a month! Your papers are really pretty.

better late than never!! Welcome. have fun with your new goodies. Anne x #34

I guess I won't feel quite as bad if I do end up breaking my craft spending ban for January lol. So far I have managed not to be lured in though I have been tempted...

Hi Jane, how restrained are you! I'd have bought more than a few of those reels of lace just for the bobbins alone!!! Pretty paper on your desk too. Good to see you here at last :) Have a great week. Elizabeth x #59

I had planned to visit sooner, but not long after I linked to Julia, my electricity went off. It came back on a short time ago, so now I'm playing catch up. We're really glad you joined us for WOYWW and hope to see more of you in 2016.

I don't collect decorator paper, but I have a love for anything G45. It speaks to me. I hope you will share what you do with your puzzles, because I've had two for at least six years, and have NEVER had an idea of what to do with them.

Happy WOYWW on Thursday from #1.

Four years lLOL, well you're welcome anytime! tiger is a downfall of mine too, but I haven't publicly declared a stash buying ban yet.....it's only a matter of time. And willpower. Which I lack! Now that paper really does invite fussy cutting, good grief. Come back and show us will ya?