When I was a tiny child, probably about 2 or 3 years old, my parents had a beautiful Willow Pattern Plate hanging above the fireplace. It was a large, circular one, and instead of being a flat plate, the features of it were raised (think embossing). Mum would often tell me the story of the Willow Pattern, running her fingers over the raised elements as they were mentioned:


Two birds flying high,
A Chinese vessel, sailing by.
A bridge with three men, sometimes four,
A willow tree, hanging o'er.
A Chinese temple, there it stands,
Built upon the river sands.
An apple tree, with apples on,
A crooked fence to end my song.
Actually she always used the phrase "A little fence" in the last line, and sometimes the fence is referred to as "pretty". But anyway, it's a lovely description of the traditional pattern. We tend to picture it as being ancient Chinese, but in fact the design and the legend it is supposedly based on come from England, in the late 18th century.

Right, education bit over for today!

The only piece of craft stash I received this Christmas was this beautiful Joanna Sheen Willow Pattern style die from one of my daughters. Today I have teamed it with a selection of papers from an old Search Press book - and hang the fact that it's really an English design, I think Chinese writing looks lovely with it!!! 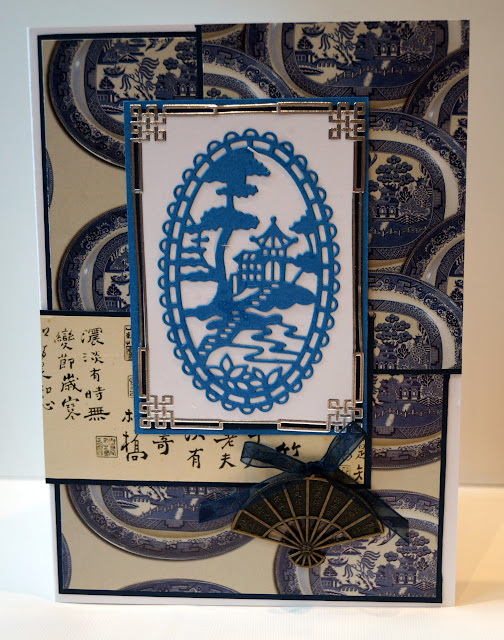 The fan embellishment is from  a QVC kit that I bought many years ago. They are lovely charms, but so heavy that they make the card "front heavy", giving it a tendency to fall over. I think I'll save the last few to use on more stable card shapes, like Easel cards, where the weight they would add could be a good thing.

There are lots of new stash challenges around at the moment. This time I am joining in with

Allsorts Challenge - What's new?
Dies R Us - Something New
Cuttlebug Mania - New (the die itself)
Posted by Jane Willis at 13:21

Very pretty and beautiful design! Thanks so much for playing in our ‘Something NEW’ challenge at Dies R Us! Please come back again soon!

P.S. DID YOU KNOW? A friend and I have a new challenge blog. Please check it out. Double D Challenges

Gorgeous oriental card!
Thank you for sharing this over at Allsorts;-))m

Such a pretty creation! So happy you decided to join us at Dies R Us for our 'Something New' challenge!

What a gorgeous die, Jane. It might have been the only crafty thing you had for Christmas, but it certainly is stunning. Love your card, keeping the Chinese theme. xx

Oh I love this Jane! What a stunning die and beautifully used too!

Such a beautiful die!
Thank you for joining Cuttlebug Mania this time!