When I first started making CAS cards, I found it a real struggle, and often shared the things that had gone wrong in my posts. I've gradually come to regard CAS as one of my favourite styles, and have far fewer disasters now, but even so, things don't always go according to plan.

For this card, I wanted to use one of the pair of sentiment stamps that I won recently in the Snippets Playground. Both are about sunshine, so my plan was to use a die cut negative to sponge a sunshine in one corner of the card and then stamp the sentiment further down the card.

So off I went, masking off the edges of the card and sponging the sunshine in Mustard Seed and Spiced Marmalade DI. I removed the die cut and started to sponge in a few rays, but I dabbed the sponge a bit too hard on the inkpad and......... BLOB 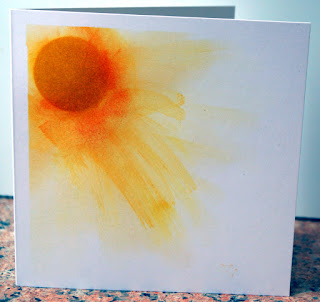 I'll save that - the fiery sunshine might make a good background for a space rocket themed card.

I started again and this time was MUCH more careful with my ink. I sponged a little green along the bottom for grass, and stamped one of the sentiments above it, and finished it with a couple of stylised dragonflies using a Rubberstamp Tapestry stamp. 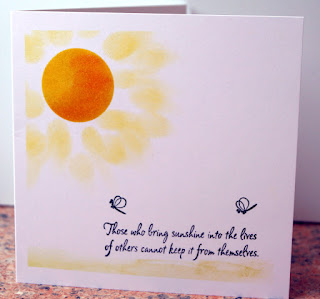 Much more successful, but a touch wishy washy. The sentiment is in quite a delicate script that looks unbalanced against the bold sunshine, and the "ground" looks out of place. Also I think the sentiment is too low down.

Back to the drawing board, but this time I used the second sentiment on the sheet, which is in a much bolder style, and opened my new set of abstract stamps from The Gentleman Crafter, using the brush stroke oval to create a grassy border and adding tiny dots of colour for flowers. A much bolder dragonfly, from an Indigo Blu set, highlighted with a trace of Stickles, finished the scene. At last, I was happy! 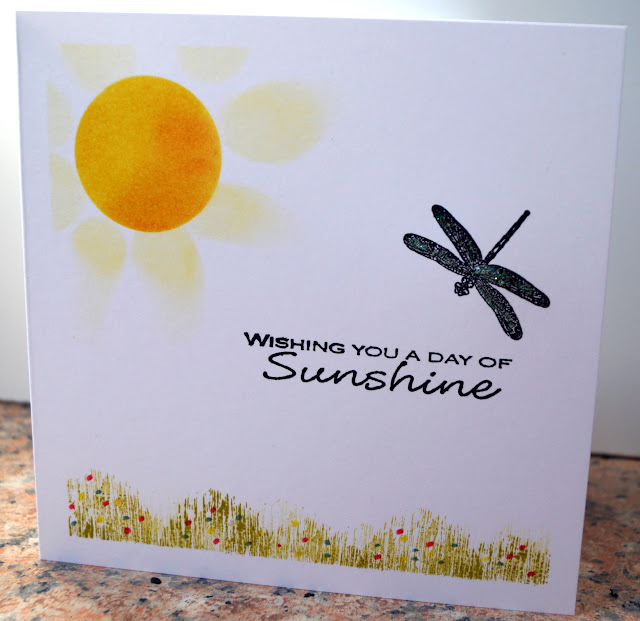 And now the card is finished, I am sharing it with

I love the finished card! (Congrats on your win, by the way!) It's so helpful to go through your thought process on the changes to version 2 - thanks for the learning.

A great card and well worth the effort you have put into making it!
Kath x

Thanks for sharing your thought process. The final card looks super. You've done some great suns too Jane. Barbxx

Your perseverance has paid off as you ended up with a wonderful card. I'm in awe of your Suns; they all look incredible.
Thanks for joining us at Less is More.
Sharon xx

Lovely to see your progression of cards until you were happy with the final result. I love how you've added a touch of colour with the flowers in the grass. xx

That is a great finished card and it was interesting seeing how your ideas evolved. Karen x

It is super to see how your work evolved to your final version Jane... which is fabulous!
Thanks so much
Chrissie
"Less is More"

Thanks for showing the different attempts Jane - have to say I totally LOVE the base stamping to your finished version!
Thank you so much for joining us at "Less is More" this week
Anne
"Less is More"

I missed this Jane! So good to see you using the sentiments stamps from the Playground and also you final card is gorgeous!