A Fold-Back card at Back to Basics

Our new challenge at Back to Basics and Beyond is just beginning and this time we would like to see a fold-back card, ie one where the front panel of the card is folded back on itself to reveal half of the inside. 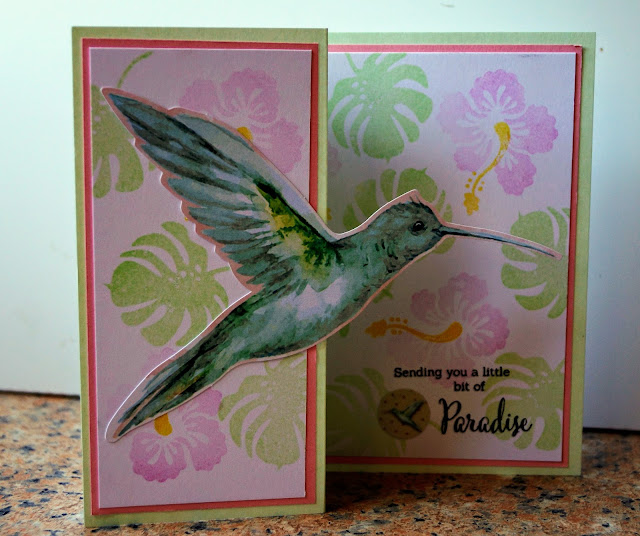 I've had this pretty pre-cut hummingbird image for ages, it was part of a bundle of goodies I won from one of the card making magazines, and I thought it would look pretty flying off the folded-back part of the card.

I made a background panel for both the front and inside of the card by stamping all over with flowers and leaves from Uniko's Paradise range, stamping each image off onto scrap paper first so that I got a fainter, "second stamping" image to keep it pale and less cluttered looking. I finished with a sentiment from the same stamp series and a tiny copy of the hummingbird from the same pack of die cuts.

I left the inside of the folded-back front empty for writing a personal greeting. 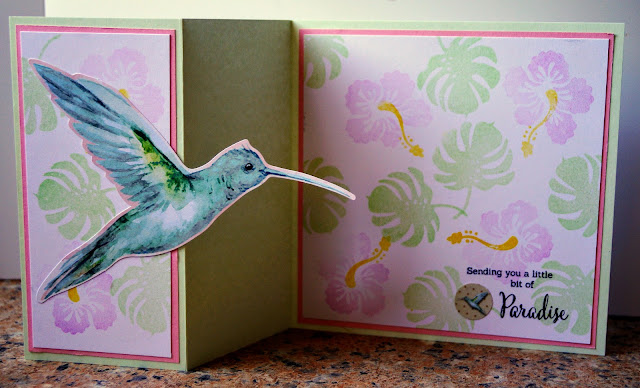 having the bird flying off the page was a great idea Jane,beautiful card

A wonderful card Jane, I love the background that you've created for the gorgeous hummingbird.

Oh what a great card, love that hummingbird. your colour choice is fantastic, Love Hazel x

Beautiful card with the pretty hummingbird and LOVE your stamped background, so pretty!!

This is so beautiful Jane, I love the hummingbird, beautifully coloured and lovely papers, Kate x

Your baackground is stunning, perfect bright colours for the gorgeous humming bird. Caz

Lovely card, the way you stamped and designed the papers with the bird flying off the card

What a smashing humming bird and he does look fab flying off your card. Hugs Mrs A.