A whale of a time

One of my best holidays ever was a whale watching trip to the San Ignacio Lagoon in Mexico, so as you can imagine I immediately feel in love with the cover gift on the latest issue of Papercraft Essentials and was inking the stamps almost as soon as I'd ripped off the cellophane! 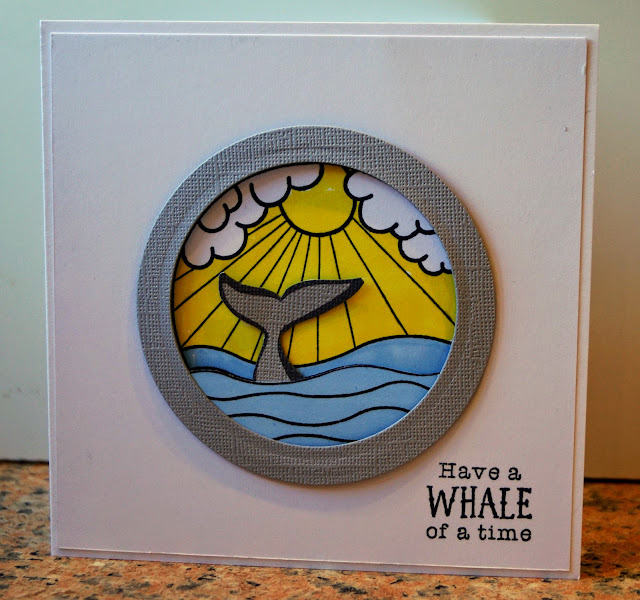 I used a scrap of card cut to the same size as the one I was using for the card front and ruled diagonally both ways to mark the centre, to position the stamp in the Misti so that I could then stamp dead centre on the card front - a mistake, with hindsight. as now the sentiment is added it looks a little "bottom heavy" and the image could have done with being a whisper above the centre.

Then I stamped the wave potion again onto a snippet of white card, coloured it and cut away the top band of water, to give me a foreground area to tuck the tail behind.

I die cut the "porthole" using two circle dies, from a snippet of grey card, then used the centre portion to stamp the tail. The tail stamp has a matching die - if I'd stamped it on white card and then coloured it grey, that would have been OK but I didn't want a grey border so I cut it out by hand - hardly an arduous task! I don't think it really really needs a die. 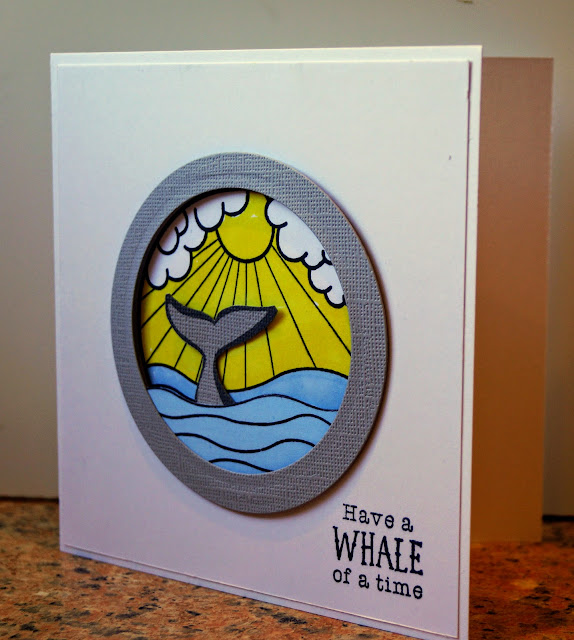 Oh wow this is super,w hata fabby card and greta memories to have too, Love Hazel x

Beautiful card! Love the stained glass look! Thank you for joining us at CASology!

This design is simply gorgeous! I don't think it looks bottom heavy at all. Sometimes we're our own worst critics. Thanks for playing along with CASology this week!

WOW! Simply swooning at this beauty. Fantastic use of our colour combo, fun and striking little scene with loads of stunning elements yet totally CAS too. Thanks so much for joining us at Less is More this week. x

Fabulous CAS card, Jane, what a great scene! The sentiment looks perfect where it is. xx

I think your card is perfect!! It isn't bottom heavy at all. I love the whale tail and the paper piecing idea just makes it all icing on the wonderful cake!! ;) TFS

Love love love this tiny scene outside a ship porthole! Simply stunning and so CAS even with all the design elements. Thanks for sharing with us at CASology this week!

Popped in to say that I love your very creative, unique and fun card x

How ingenious Jane! LOVE this card and your handiwork is terrific. I bet you can cook as well? :)

Love this design - beautiful CAS and colourful too.

Congratulations for your win at CASology with this spectacular and gorgeous CAS card ! This little marine scene is absolutely stunning and I love every detail. A striking take on our colour combo. Thanks so much for sharing and for playing along at Less is More. x


Beautiful image the building You chose well for the theme.
Your blog is very nice,Thanks for sharing good blog.
คาสิโนออนไลน์

Fab showcased card over at the Snippets Playground. Looks great to me and has made good use of the magazine stamps. X