I love the Woodcraft seagull stamp I've used here - he's so bold and CAS and being a stylised gull, he  can be coloured to represent any gull you like (except a tern, the tail's all wrong for a tern). Today he is being a black headed gull, after a fashion! 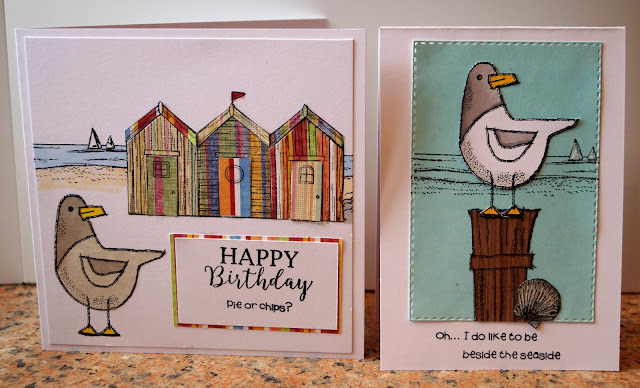 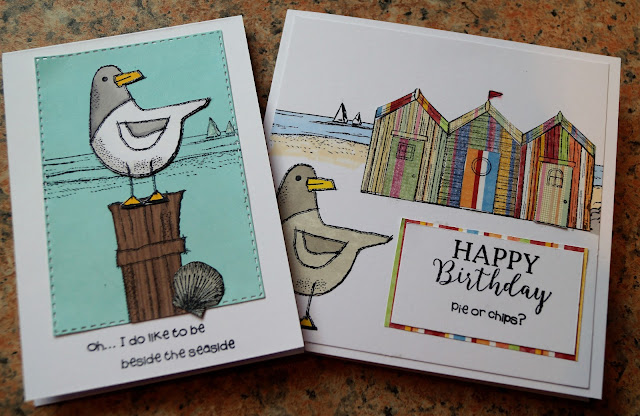 The post and the smaller font sentiment stamps come from the same stamp set as he does, and the rest of the stamps from a set that came with Creative Stamping earlier this year. I've used paper piecing for everything but the backgrounds - the beach huts are pieced together from a crazy selection of stripey snippets and I used a pale fawn vellum for the gull on that card to make him look like an immature one. One of my earliest memories is of a seagull swooping down and stealing some of my Dad's chips while were were strolling along the promenade at Torquay so the sentiment on the birthday card means a lot to me!

I am sharing the pair of cards at

A Place to Start - Paper piecing

Now here's a closer look at the cards separately 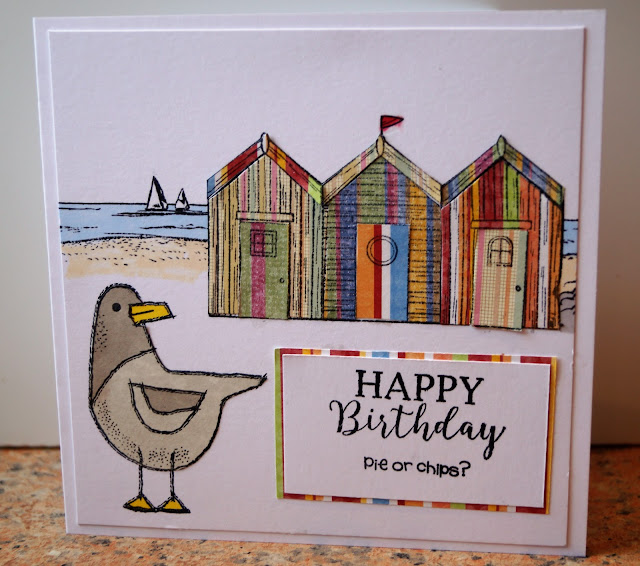 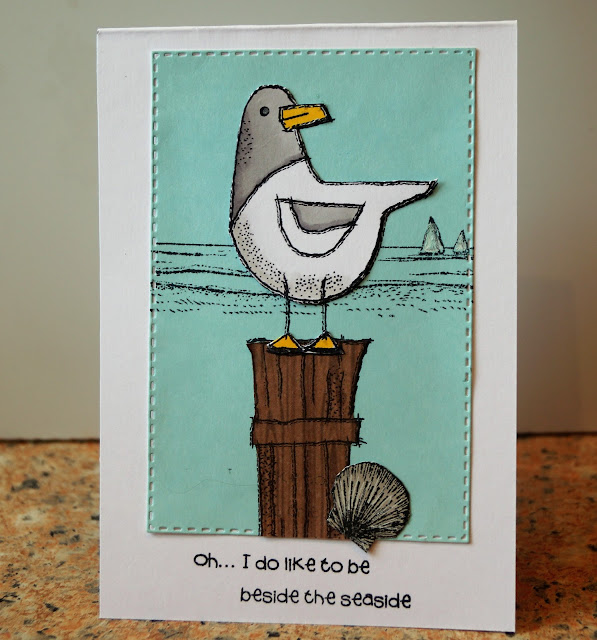 I am sharing the second card with 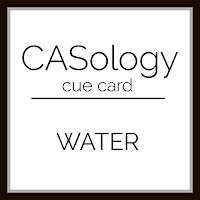 Two fab cards. Such a great idea must try this idea. x

That's a lovely set of cards, now I want to go to the beach.
Love
Ela

These are just brilliant. I love both cards. Hugs Mrs A.

These are whimsical and delightful designs, Jane! You did an excellent job of paper-piecing those huts in a festive colorful fashion and I love that you thought about how to make one of the gulls a juvenile by using the vellum! Fabulous attention to details on both cards!! Thank you so much for playing Twofer Card Challenge #19! Hugs, Darnell

(ps I felt like I was on the beach with you and your Dad and love that you evoked that memory when making your card! I have two seagull memories: one of The Mister getting a huge splat of seagull poop right on his head and down his glasses as we were coming out of the Aquarium in the City! Oh, my, I felt so sorry for him and I was thankful the bird's aim wasn't ten inches to the left, lol! My other one is of this guy!: https://www.djkardkreations.com/2017/08/jugs-gd-407-color-week-red-yellow-blue.html. Thanks for sharing!)

Those colourful, striped beach huts make a fabulous background for that young black headed gull, Jane ... and the sentiment is a riot ... I guess gulls will have both! The mature gull looks very stately on his solitary post ... he pops wonderfully against the aqua background! Thanks so much for playing along with us at Twofer! Anita :)

Brilliant cards. I especially love the beach huts. Thanks for your comment on my blog. I'm surprised you haven't managed to stick a dragon fly in there somewhere, lol. Love Dawn x

I loved learning more about seagulls, thank you! They are a wonderful nautical representation. Those beach huts are so fabulous in their varying stripes and what a fun sentiment, given your childhood memories! The gull on his post looks perfect with the aqua background! Thanks for joining in the fun with us at the Twofer Card Challenge!

Love all these Jane. Beautiful colouring as always.
Carol
xx

These are 2 great cards. I love how you have used the beach hut stamp with the paper, very effective. I noticed your card in the gallery because I have used a different stamp from the same set for my twofer cards xx

Love your paper-pieced beach huts and the way you have used your free stamps. I, too, have this stamp set and had planned on using some of the stamps for my Twofer (I had already started) but decided to go with a different idea first and then ran out of time to finish my first cards. Life does have a tendency get in the way of crafting sometimes...

Wonderful paper piecing and perfect for our challenge this month at A Place To Start.
Scarlett xoxox

Congrats on your honourable mention for the twofer challenge, very well deserved xx

Terrific pair of cards! Thanks for sharing with us at CASology!