Hello everybody and welcome to my first non-scheduled post of 2016. I had to get ahead and schedule my late December and early January DT posts because I was on holiday to Mexico in early December, then went to France for Christmas, then had family over for New Year - and cooked a Christmas dinner. As I craft on the dining table, it meant packing away all my craft stuff, and I've only just got it all out and into action again. But it's such a wet, miserable weekend I'm devoting it almost entirely to crafting, so I have several cards to post about today if I get chance.

Have you made any crafting resolutions this year? I think mine are the same every year and generally last about a week into January:

Anyway, enough rambling and on with the craft. I started off with a card for the Butterfly Challenge, where the theme is X is for Xanthine. Despite being a crossword addict and former rather serious Scrabble player, I'd never heard of the word Xanthine but here is the definition according to Mrs A

Xanthine =  The yellow colouring matter found in certain plants as in Yellow Madder.(Madder is from the Genus Rubia and has small yellow flowers, whorled leaves and a reddish brown root.)
and so she wants to see a yellow butterfly on our card, and ideally more yellow elsewhere in the design.

I made this card in my head several times over before actually setting to and making it in real life, and I have to say the imaginary version worked a lot better than the real one! I die cut the butterfly from bright yellow paper, and again from a pale yellow panel just slightly smaller than the card front. Then I did the stamping on the yellow panel - and I really wish I'd not bothered with the swirls. They were supposed to be  way of drawing attention to the aperture, but they just look messy. Inking the edges of the aperture would have worked better.

I covered the card front with patterned vellum - it has a yellow all-over trailing vine design, to show around the edges of the top panel and through the aperture, and then mounted the panel with foam tape and attached the body of the butterfly in place in the aperture.

The delicate effect I was looking for doesn't really show off the different layers - I might try this technique and layout again using bold, bright contrasting colours instead! 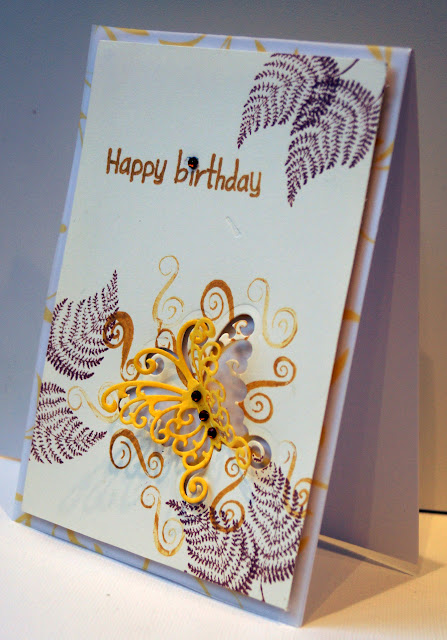 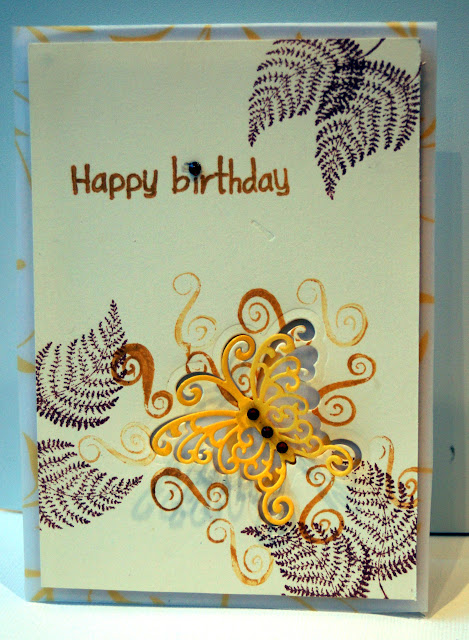 Anyway, it's eased me back into crafting again which was the main object of the exercise, and I thoroughly enjoyed making it even if it didn't work quite the way I'd intended!
Posted by Jane Willis at 11:42

I quite like the swirls. I think they work well with the butterfly. Lovely design as always.

A lovely card, I like the swirls too, they look organic as if they are the movement of the wings. Thanks for joining in over at Butterfly Challenge x Amanda

Hi Jane, Happy New Year to you. I think the contrast of colours on your card are just perfect as they are. Love how you have created the layers and then done the cut out of the butterfly and raised up on top of the card. Maybe not what you had envisaged but just as striking. Xanthine does exist honest. It was in my Dad's Bennett's College dictionary. Can't find the puplished date but my Dad signed the fly leaf in 1942!!!!!! Thankyou for fluttering by #45 butterfly challenge. Hugs Mrs A.