I've made this card for a friend who has a birthday later this month, but I'm pretty sure she doesn't read my blog (Pelfy, if you are spying on me step away NOW and scroll no further!). 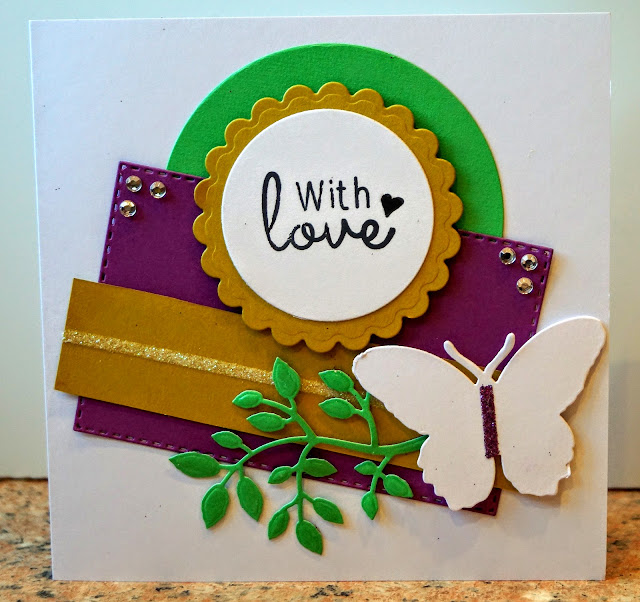 It's basically just loads of die cuts! The sentiment is stamped with a stamp that came with Quick Cards Made Easy a few years ago, and sadly it was its very last outing. As most magazine freebie stamps tend to, it's gone hard and is cracking and took me about a dozen repeats to get it clearly stamped. (If they don't turn brittle, they melt - but I must have had a good 5 years of use from it so I can't complain!). I've added the bands of gold and purple glitter using double sided tape - maybe a less rigid looking stripe would have looked better on the butterfly but I wanted to keep all the edges clean and bold. The leaves have been finished with Glossy Accents. I would have liked to apply it through the embossing holes in the die, as I would with ink, but I had visions of sticking the die to the card so I did it freehand instead. I also added Glossy Accents to the heart in the sentiment. And just in case you can't see the sparkle and shine, here's a closer look. 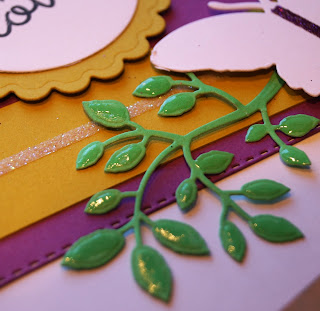 Why second time lucky? Well, when I was sketching out the card, I planned to use a purple butterfly to match the rectangle layer, thinking the dimension enough would be enough to make it stand out  from the card, but you can see here that it didn't work. 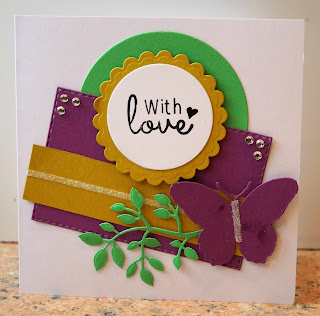 I had to laugh when my husband saw  the reworked card. As you know, he is a keen gardener and when he saw the butterfly, he said "A white butterfly doesn't look very realistic." I replied with just two words.... "CABBAGE WHITE". Game, set and match to me!

I have made this with two challenges in mind, two of my favourites that I always try to join in:

Pixie's Snippets Playground because everything (including BOTH butterflies) except the base card came from my snippets box. In fact they were all the last bits of snippets, causing some very careful positioning of dies to make sure I had enough for everything, so it's been a good clearing out exercise.

The Butterfly Challenge where I have managed to include ALL the elements on the wheel - green, gold, grape, gems, glitter, Glossy Accents and of course a butterfly.
Posted by Jane Willis at 11:39

Lovely card, I am sure she will love it

Wonderful cards Jane - and I did giggle about Mark and the cabbage white! You used tons of snippets here which is great to see.

And so funny about the sentiment stamp being on its last legs! I used the other free one from the same giveaway (Happy Birthday) and had the same issues as you! The blog post is already written and scheduled and I also mentioned that the stamp had lost it's 'stick' and gone a bit weird! Sad really as both stamps are really nice when they work!

Great to see you in the Snippets Playground!

Wel of course it's a Cabbage White. Fancy hubby not knowing that and being a gardener an all. Does look so more impressive too. Great use of all those die cuts. Thankyou for coming and spinning the butterfly wheel with me this week. Hugs Mrs A.