I do enjoy watching the occasional game of snooker - I even used to play a little during my mis-spent youth - so I thought for my latest Snippets make I would attempt to recreate a snooker table. 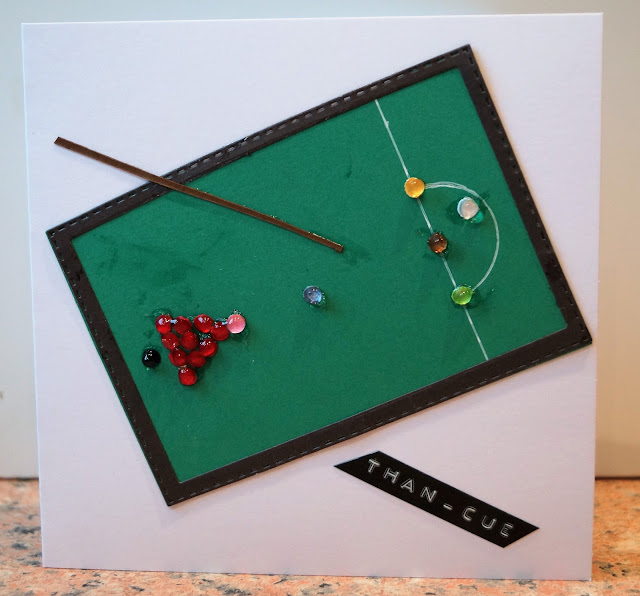 I cut a rectangle of green card then die cut a dark brown frame to use as the edge of the table. I decided not to add pockets as they would weaken the frame too much. I used a white gel pen to draw in the baulk line and the D.

Then I used the large hole on my Cropadile  to punch coloured circles from teeny tiny snippets of the appropriate colours for the balls, stuck them in place (ooops, there wasn't room for the full 15 reds so I've had to make do with 10) then used crystal clear liquid pearls from Dovecraft to give each one a ball shape. I was a little impatient here - the reds would have been better if I had allowed each one to dry before doing the one next to it, but that stuff  takes FOREVER to dry and I'd have been still doing then one by one into the middle of next week!

A sliver of brown forms the cue and I've used a Dymo label maker to create a punny sentiment.

CAS on Friday - use a frame

Allsorts - Thank you (or new year)

WOW this is absolutely brilliant -I love it we used to have a snooker table when ours were younger and used to watch it when Hurricane Higgens used to play more interesting then just boring to watch now!
Carol x

What a clever card Jane and love the wording pun in a sentiment. As Carol said snooker did seem more interesting then.

So clever, especially the sentiment. I was wondering how you did the balls - brilliant idea.
Thanks for sharing with us at The Male Room.
Lynn x
DT

What a brilliant idea and design, I may have to pinch for some Man cards, thank you for joining us at Allsorts xxxx

Wow, this takes me back - to my 20's. I've never played snooker, but I was playing 8 or 9-ball every night for about ten years straight! Played in a lot of 9-ball tourneys and even had the honor to play in a couple of Pro tourneys (didn't do well against the Pro's, but it was still an honor!). Your card is awesome!!

Great snooker card, Jane! Thanks so much for playing along at The Male Room Craft Challenge. Good Luck!

What a fabulous idea Jane and a brilliant card! Clever you. Love it!

Lovely creation, thank you for joining our challenge at Allsorts this week.

WoW! This is just great, I like your beautidul card :-)) Thank you for joining The Male Room this time!

Fabulous make Jane, love your table and card. Thank you so much for joining us in our Hobbies challenge at The Male Room this week. Looking forward to see you again next challenge.