Flowers for a sunny day.

It's a bit too hot for crafting at the moment isn't it? My crafting mojo seems to have melted! However, fuelled by iced drinks, I have managed a card for you today. 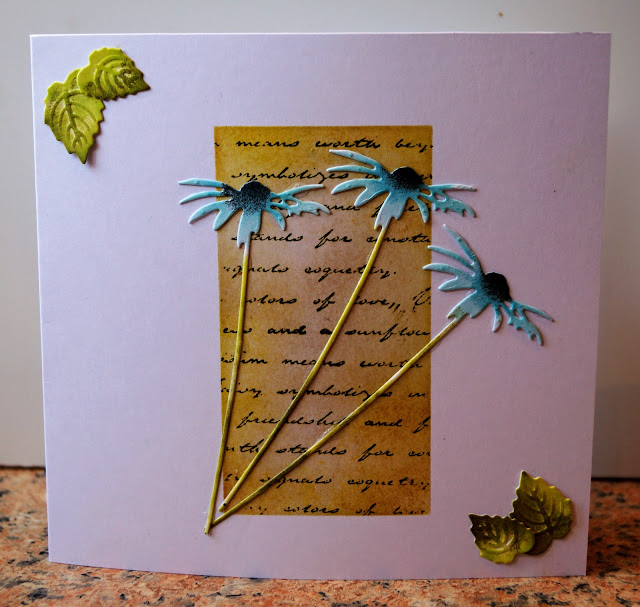 First I masked off  the card to leave a rectangle in the middle, then sponged distress inks in shades of green and brown randomly over it, before stamping with a script stamp in a darker brown. You probably can't read the text but it is a description of the meanings of flowers, making it a very appropriate background for anything floral.

Next I die cut the flowers, using a Gummiapan die called Flower Rudbeckia (although I've not used Rudbeckia colours on it). I used fingertip daubers to colour the stems in the same greens I'd used for the background, the flowers in several shades of blue and the centres in black.

The card was finished, I started to clear up and then.....

I dropped the dauber I'd used for the black ink and it landed face down on the card and made an enormous smudge in the corner. I came very close to throwing the whole thing away and starting again, then I though, "Hang on, those flowers don't have any leaves yet," - so I gave them some. One pair to cover up the blob, the other for balance. The dies are from a very old Sizzix set and I coloured them with the same inks - handling the daubers much more carefully this time!

I am sharing this with
CAS Mix up - colour your die cuts (plus stamping, spongeing and masking)
Love to Craft - Anything Goes
Country View Challenge - in the Summer garden
Posted by Jane Willis at 13:31

Disaster avoided, great card, no one will ever know you had a little ooops,
It’s just too hot for crafting, I am strangely suffering, go across Europe and it can be anything up to 40c no problem, here I am and have wilted, I’m finding when I try and make a card everything goes wrong at the moment, too hot to knit so the cardigan for America has been put on hold as it’s for winter. Even my tatting has dropped off. It’s lovely to have such great weather,

Absolutely love this card. Great masking and those die cut rudbeckia dies are fabulous, loving the colours. Great save with using those leaves. Gorgeous card, wonderfully CAS and great use of the fun technique. Thank you for joining in the CAS Mix Up Challenge and good to see you in the gallery x.

Gorgeous card, Jane, I love the background for these beautiful flowers. Great recovery from your little mishap, no one would ever know that the leaves weren't in the original plan for your design. xx

We have all had that disaster, Jane. I love the addition of your die cut and colored leaves to go with your die cut flowers. TFS and so pleased you joined us at CAS Mix Up. Hugs..

Great save, Jane! I have dropped an inkpad on a card and shoved one atop an open inkpad so I can sympathize with you. The leaves are a perfect fix! The flowers are AMAZING! Love that die (a new one to me) and how you've colored them! And the script of meanings of flowers is so appropriate and perfect! Thanks so much for sharing this with us at CAS Mix Up!

Beautiful design Jane! Love the masked rectangle with stamped script. A perfect place to show off your gorgeous flowers. Great save with the die-cut leaves for the corners. Thanks for sharing with us at CAS Mix Up!

Beautiful card Jane and great save with the leafs. It would of been a shame if you binned this card.

A gorgeous card Jane and what a great save! We have all been there (well I know I have) and many projects have been filed in the big blue bin under the desk lol. Thanks so much for joining in with us at Country View Crafts, and enjoy the rest of the weekend, Sue xx

Oh gosh, how many times have I plopped my card into an ink pad, stamped a sentiment crooked or dropped a stamp onto it just as I was finishing it up!! Great save on this Jane with your pretty leaves! love that masked text background and your lovely blue blooms! thanks so much for sharing with us at CAS Mix Up!

Great card Jane, those blue rudbeckias are beautifully against the masked-stencilled background. So happy you found a solution for your smudge. Thanks so much for joining us at CAS Mix Up1

Lovely card, Jane and so very clever saved! I think, we all know such desasters, but not all can be rescued.
Thank you for joining our challenge at Country View Crafts this month.
Have a wonderful summer!
Evelyn xx