The Twofer that became a Threefer

So there I was, minding my own business, happily snipping and stamping away at my cards for the current challenge at Twofers, when another card sort of made itself.....

Settle down, it's a long story.

It started while I was watching Mastermind last night. I know I get card inspiration from some strange places, but Mastermind? REALLY? Well, the answer to one of the questions was "The American term for what we call Hundreds and Thousands is Nonpareils" - which led me to think of rainbow sprinkles - which made me think of the sentiment I've used on one of my cards - which made me think of vanilla doughnuts. My mind works that way. Sometimes.

So, armed with my Dylusions sentiment and the doughnut and sprinkles stamps from a past issue of Creative Stamping, I set to to create this card. 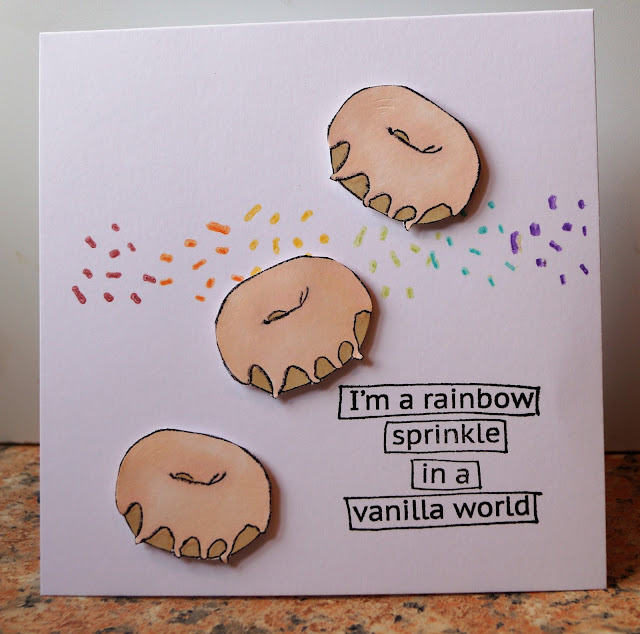 I am sharing this card with Less is More - Rainbow.

Next I had a delve into the snippets box and came up clutching a  bundle of pretty floral papers. As there were three co-ordinating ones, each roughly a third of an A4 sheet, I decided to make a trifold card. The plan was to stamp the doughnut on the offcuts of the paper (snippets of snippets, if you like) and add them to the patterned panels - however they looked lost against the patterned backgrounds, so I stamped and coloured three more plain vanilla doughnuts which worked much better. 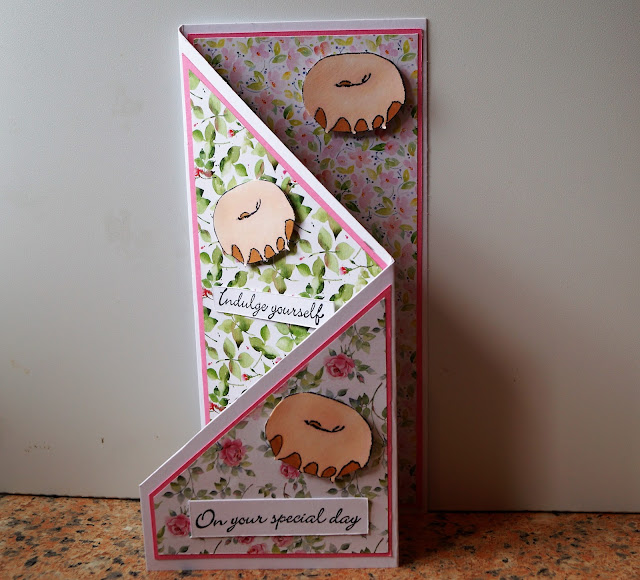 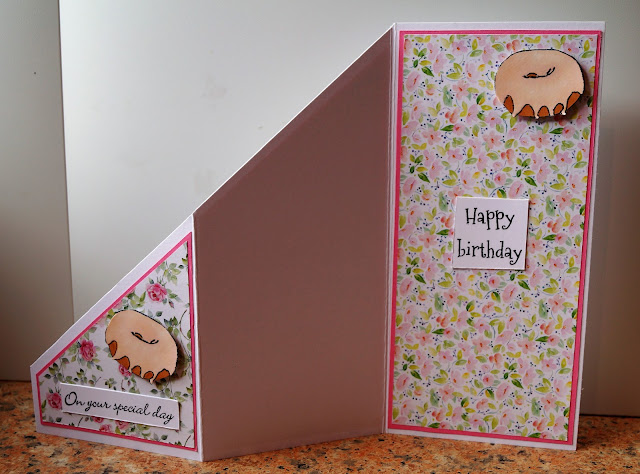 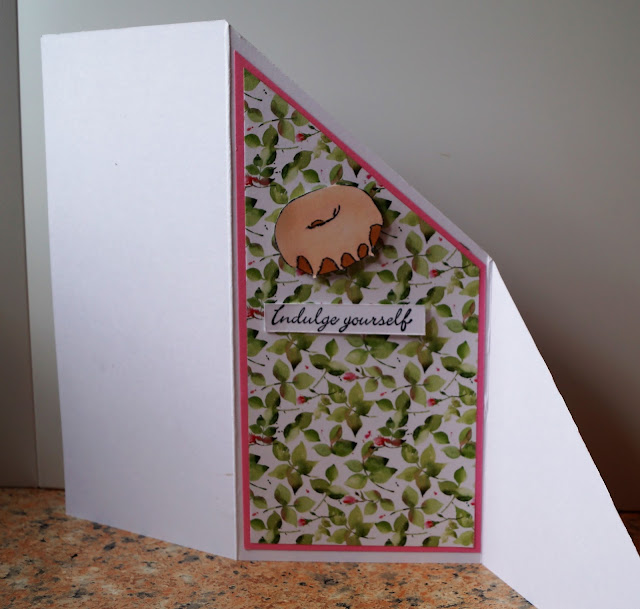 I am sharing this at Pixie's Snippets Playground - challenge #363

So here is my Twofer pair, as I had originally planned them. 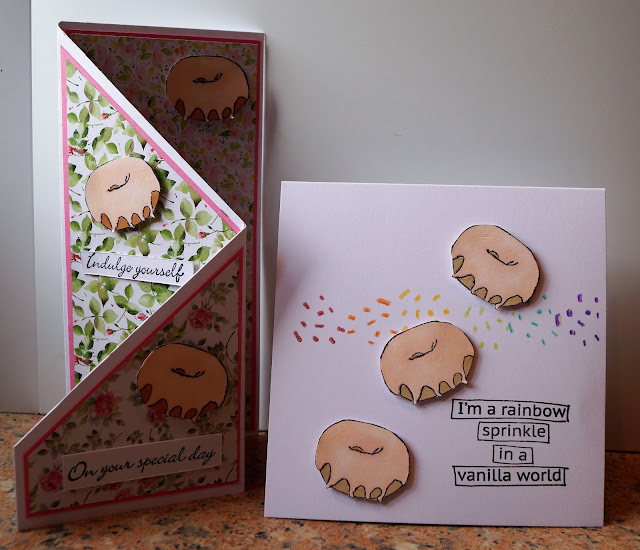 Which, of course, I am sharing at Twofers - Sweets 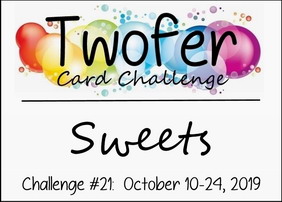 However there were three stamped doughnuts, on patterned paper, left sitting on my table. Once I'd coloured in the "cakey" part they looked so pretty - if Cath Kidston made doughnuts, I reckon these would be them! I couldn't just throw them away or bung them in the Black Hole of "stuff I didn't quite use this time but might some time in the future" where so many stamped images go to die, so while I had the stamp set with its fun sentiments to hand, I popped them onto an extremely quick and CAS card: 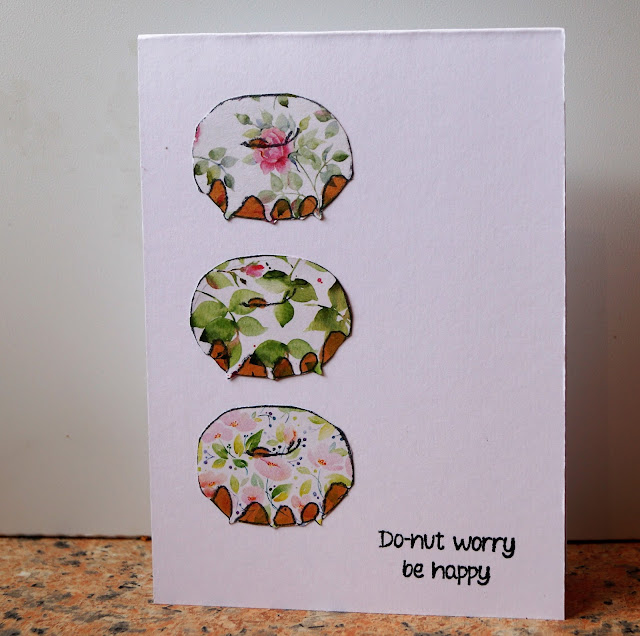 So there you have it, the twofer that became a threefer.

Incidentally if you are still reading, apologies for radio silence for the last few days, I've been away at my Mum's for a few days. She's almost 94 now and getting very frail both physically and mentally so it's been quite a challenging time. It's lovely to be home and crafting again - crafting takes my mind off things wonderfully!
Posted by Jane Willis at 13:28

If some bakerperson searches on donuts and finds that Threefer design, you will have singlehandedly created a trend, Jane! AS a CASlover, I'm all adrool over the pretty flour, er, flowered donuts and perfick sediment! That's not so say, however, that I don't also love your Twofers! Your row of rainbow sprinkles behind your vanilla donuts personifies that sediment brilliantly! And I love your tri-fold birthday card and the inspiration for using snippets of pp!! Thank you so much for playing in Twofer Card Challenge #21! And blessings to both you and your dear Mum. Hugs, Darnell

Wonderful work Jane - I suspect your mind works a bit like mine, sometimes I end up in a totally different place to when I started out - yours is a huge success!!

What fun cards!! I love the one you made for our rainbow challenge at Less Is More. I do love that sentiment and yourdesign is perfect for it! Thanks so much for playing with us!

Well, you have been on quite a thoughtful journey there Jane! Love the three cards that resulted but especially the florally iced doughnut card! Absolutely brilliant! Vicky x

Gorgeous threefer ! Beautiful designs and especially the one you made for our challenge. Love these rainbow sprinkles and these donuts look so yummy. Thanks so much for sharing and for playing along at Less is More.

I'm only now getting at commenting, as we've had a houseful of guests for a family wedding and the last have just left. I'm glad I didn't have to squeeze a comment in between cooking, visiting and playing with the grands -- it gives me a bit more time to tell you how 'sweet' your cards are! Mmmm...doughnuts! I have wonderful memories of my grandma making piles of them for the farm hands during harvest time, so thank you for sparking that memory! Your doughnuts are delightful and rather delicious looking. I love the florals and leaves on your last one, and I've seen similar ones in real life at those gourmet bakeries, too. Yours are every bit as tempting! And that tri-fold card...I never think to do that, but may have to look through my file drawer of snippets later today. I will add, that I adore your CAS sprinkle card, too. Your design draws the eye right into all your elements. Thank you so much for joining us at the Twofer Challenge. Bev