And when I printed out this glum-looking Grumps image from the  CD The Best of La Pashe 2014 I immediately thought he looked like a proper Jonah.  At the time, the rain was torrential and it was easy (well, easy for MY imagination) to imagine our rivers getting so swollen that an unsuspecting river angler might find himself swallowed up by a whale that had swum off course.

So I raided my snippets box for all kinds of blued and greys and die cut some waves and a whale, using dies from the X-cut Build a Scene Pirate Ship set that I won a while back in the Playground. I livened up the die cuts a bit by sponging on inks in greys, blues and white. I finished the image with Wink of Stella which as usual you can't see, to make the rain glisten. 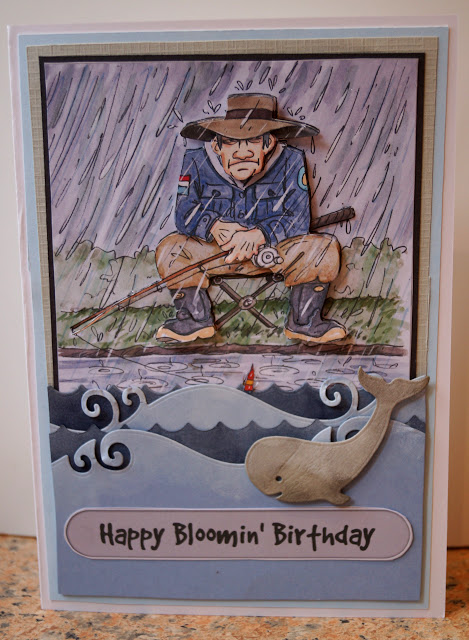 Oh, and the title? It comes from the way my brain tends to play "musical word association"  - every time I see the world "whale" I start to hum the bit about Jonah living in a whale, from the song "It ain't necessarily so"  from Gershwin's Porgy and Bess.
Posted by Jane Willis at 08:00

A fantastic card. Great humour in this card. The colours look great too. Barbxx

And that is why fishing doesn't appeal to me! Well that and the having to handle fish bit. Hubby laughs as I won't have anything in our fish tank that grows bigger than 4cm cos they scare me! Love the card. Cara x

You know if your imagination and my imagination got together we could be filthy rich, Jane!! The story, the card, the smile on my face ... what a fabulous visit I've had!! The cranberry-infused wodka went down a treat, too! Mwah!! Hugs, Darnell

This is a fabulous card - love how the rain looks so realistic. Thanks so much for joining us this time at the Suzy Bee's Bloomin' Challenge, Elizabeth (DT)

Sorry I'm a bit late commenting - been busy sweeping up all the empty crisp packets and bottles in the Playground :)