Not too sure about this one!

I'm going to apologise in advance for this card - I made it for the Glitter'n'Sparkle blog's Sun/Moon/Stars/Space challenge, but the idea in my head and the finished card really don't match up with each other and I'm very disappointed with it. Where's Darnell's Boo-Boo challenge when you need it? I'm sharing it anyway, just to show how much can go wrong with one little card. 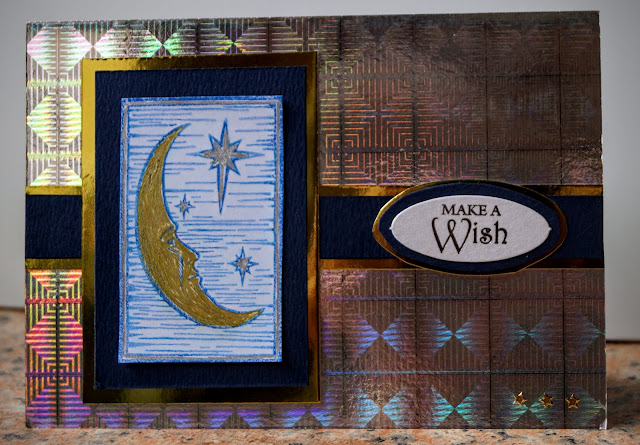 For a start, the base card I used was one of two I have left from a pack of hologram cards I bought many, many years ago. It's been lurking in my stash for all that time, and really, if I'd liked it, I'm sure I would have used it long before now. Sometimes there are stash items we really ought to admit have defeated us!

Next the moon and stars image, which is a very old unmounted stamp. My idea was to stamp it with a blue water based ink, then use a waterbrush to draw out some of the blue to form a background. So far so good. But I wanted the moon and stars to shine to go with the hologram card, so I coloured them in with metallic gel pens, and they simply don't give a good enough coverage over large spaces. I tried going over it again, but I could feel the card beginning to give way under the pressure of the pen. But heigh-ho, the real moon isn't evenly coloured, is it?  It's riddled with craters, well, so is my image after all that colouring!

Now on to the sentiment. When I was a little girl, my grandma always used to say that if you saw the new moon, you should turn your money over and make a wish. So this Craftwork Cards "Make a wish" diecut sentiment was the obvious choice. The trouble is, with everything else matted and layered, it looked a bit lost just plonked on the card, yet I don't have any dies that fit it, so had to hand cut the layering. You have NO IDEA how many times I recut that blinkin' cardstock! And it's still not even.

I added some peel off stars to the bottom corner, but I'd used up all the ones I wanted to use and these are far too small. And finally, take it from me, trying to photograph such a large area of holographic card is a complete and utter bu$$er. Can you see that blueish cast towards the bottom of the card? I think that's a reflection of the air around me as I spewed out a collection of unladylike words.

Oh well, at least I tried, and you Glitter'n'Sparkle ladies are going to have to take a look at it if only yo laugh at all my failures!
Posted by Jane Willis at 13:35

Oh bless you! Why do we force ourselves to carry on and try and rescue something when it's not working for us? I can't say it's the best card I've ever seen, but it's a very long way away from the worst, probably to the moon and back away from it! Cara x