If you're anything like me, you can't bear to throw away even the tiniest scraps of metallic card  - they just seem so precious - so your snippets box is full of tiny, tiny shiny things that seem to be too small to ever be any use, but are far too pretty to throw away.

All that changed when I got the Dies R Us die set, "Out of this world" which has a selection of space themed dies perfect for even tiny scraps, so I had to make a card to celebrate. 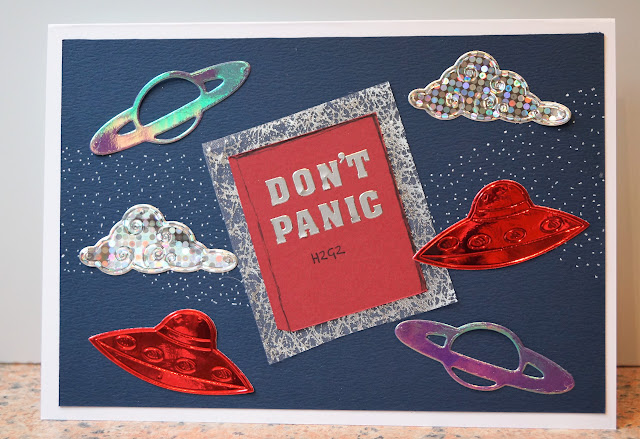 To make the "Milky Way" on the background, I used a white gel pen to make two curved dotted lines swoop across the card and then filled in the space in between with more dots. The planets, cosmic clourd and flying saucers are all cut with the dies. Interestingly, they are NOT embossed, the markings are made by the die making a sort-of half depth cut, an effect I've not seen before.

Now, if you are wondering why there's a book in the middle that says "Don't panic" on the cover, I'm not sure we can be friends any more. It is, of course, a reference to The Book from Hitchhikers Guide to the Galaxy, a series of books written by the late and much lamented Douglas Adams, which was serialised first for radio and then for television and later made into a film. Why is it mounted on a piece of silvery mesh effect fabric? Erm, because I found it in my stash and thought "I haven't used any of that for a long time". It doesn't serve any meaningful purpose except to make The Book stand out from the rest of the scene.

I am sharing this with
Mod Squad - sentiment as Main Focus
Pixie's Snippets Playground - week 247
The Male Room - Star Trek or any other Space series (H2G2)
Posted by Jane Willis at 08:34

It looks great. Well done using up all the glittery scraps. Those dies look just perfect for the job. Barbxx

This is fabulous Jane! And a great way to use up those precious metallic scrap - I'm exactly the same, can't bear to throw them out no matter how tiny!

Oh this is a GREAT theme! Quite FUN! Love the orbiting planets and clouds....great Designer Papers! Tee Hee with your sentiment too! Thanks so much for playing along with us at The Mod Squad Challenge Donna, Challenge Host.

Brilliant way to use up those scraps and of course we know that 42 is the answer ... Cara x

We can definitely be friends. ;) Awesome card!

I LOVE your Milky Way, (very creative) and your die cuts, they are perfect for our "Space" Challenge. The book and sentiment are GREAT. Thank you for joining us at The Male room.
Faith DT

A great way to use up those special papers we just can't bear to throw out. Fantastic card.

The answer is 42!!!! Love, love your take on the theme. The tiny shiny spaceships are just fabulous. Thanks so much for playing along with our Star Trek (space series) theme at The Male Room. Deborah, DT.

Hitchhikers Guide to the Galaxy is one great book... Too bad we will all be vaporized into little atoms in a few seconds!! HA!! The take on our theme is well done. The use of metallic was a fantastic choice.. Thank you so much for joining us at The Male Room.
Cyber Hugs,
Shawna DT

A great use of metallic scrap, after all there must be a ton of it up there already! Thank you for joining us at TMR with one of the best five part trilogies ever.

Super card, you little metallic planets are ace. Milkyway in background is inspired. Guess Marvin was pouting in a corner. Thank you for joining in with us at The Male Room.