Sisterhood of the Snarky Stampers Challenge 68: A is for AAAAARGH

It's almost Talk Like a Pirate Day, which is celebrated on September 19th, and Edna  has dressed up specially for the occasion! We'd love it if you would join me and the other sisters over at the Sisterhood of the Snarky Stampers and share your pirate themed creations, the snarkier the better!

For my card I have used a digi called Peg leg Pete from Dr Digis , coloured with Promarkers, and a computer generated sentiment torn, inked, distressed and curled a bit. The background is made by cutting the skull and crossbones from the X Cut Build a Scene Nautical die set into scrap card then using it as a stencil to dab white ink through. Although the ink is Stampin' Up Whisper White which is pretty opaque, it still came out pretty grey so I embossed the stamping with opaque white powder. I just happened to have a suitable charm to add as a finishing touch. 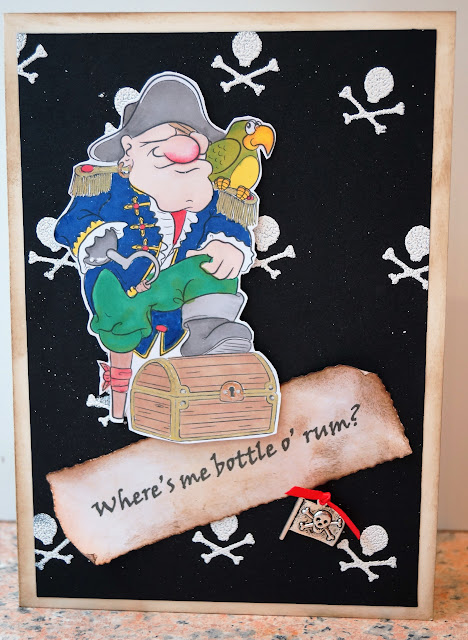 Awesome pirate, super card!! the answer is in the cupboard.

Fun card! That really is the perfect charm, too. It's so rainy and bleak here today, I might go looking for me own rum soon! ;)

I like the clever way you made your skull background. The pirate looks great and the paper beautifully aged .