Barbecue with a Korean twist

It's ages since I posted about food on here, but I'd like to share a lovely family get together we had at the weekend.

Last autumn, I was lucky enough to win a super prize from Heart Radio - a video family barbecue cooking class, a new barbecue and a shopping voucher to buy the food for the class. Unfortunately a mixture of local and national lockdowns meant we weren't able to get  the grandchildren here to join in the class until this weekend.

We'd agreed on a Korean theme for the event, as we all love South East Asian food. The class was conducted via Zoom, with the chef Ben and his assistant Monica in a car park somewhere in London and us in our kitchen and garden. There were six of us - me, Mark, daughter Emma, son in law Dave and grandchildren Lara and Holly. We set up the Zoom link on two devices, one in the kitchen and one in the garden, which was really convenient not just for talking to the chef but for making sure we were all doing the right thing at the right time.

Here are the dishes we made - because of copyright I can't share the recipes, only the chef can do that. But I've given you a description of each so you can picture the flavours and perhaps come up with similar ideas. 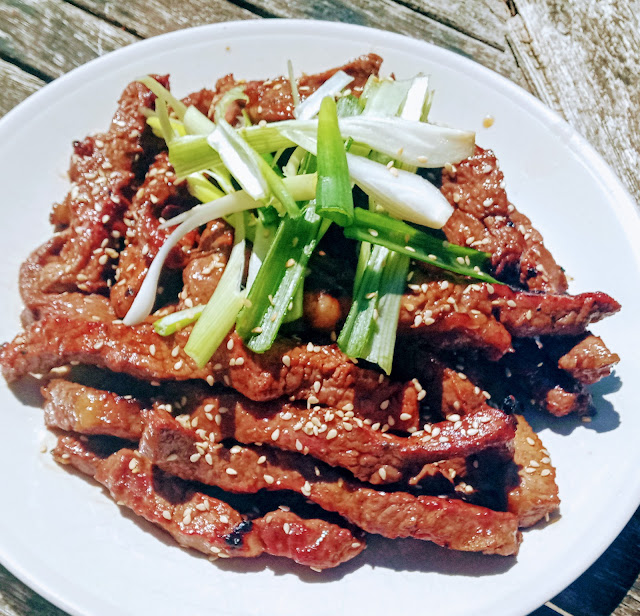 Marinated Korean Beef - rib eye steaks,  cut into strips and marinated with an Oriental style marinade that included gochujang (a Korean chilli paste that I've never tried before. It featured heavily in this menu and I think it will become one of my staple ingredients. it has a good chilli flavour without adding fierce heat) and the surprise ingredient, a grated pear. I think it may have been an enzyme from the pear, or perhaps the malic acid in it, that made the beef mouthwateringly tender and succulent, and with the smoky flavour ftom the barbecue, this was very much the star of the show! 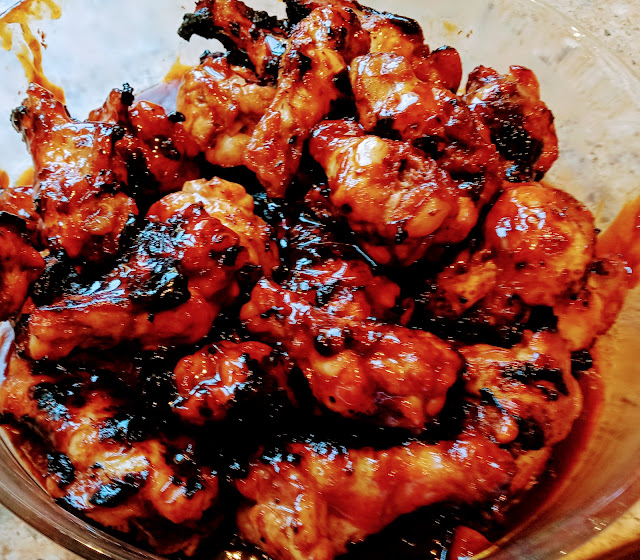 Korean Glazed Chicken Wings -  this time both the marinade and the glaze contained the magic gochujang paste. After marinating, the wings were barbecued then finished in the sweet, sticky sauce. Eaten with fingers and plenty wipes! Addictively more-ish, although the amount of sugar and honey in the glaze meant as a diabetic I had to go easy on them. 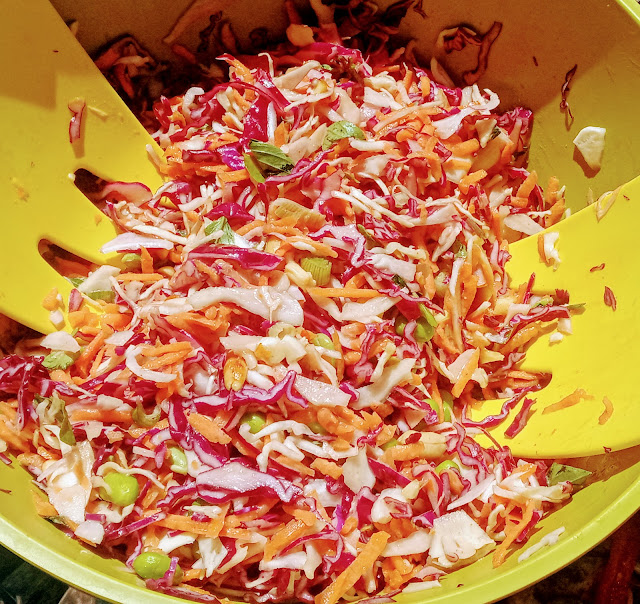 Asian Slaw with Ginger Peanut Dressing  - a salad of red and white cabbage, carrot, spring onions, cooked edamame beans, salted peanuts, Thai basil and theoretically red peppers. We have a couple of red pepper haters in the family so they were served on the side for the rest of us to mix in to our own portions. Tossed in a dressing that featured lime juice, soy sauce, peanut butter and Sriracha. A gorgeous blend of colours, flavours and textures. There was a lot of it too, that salad bowl is HUGE. But it was all gobbled up between us. 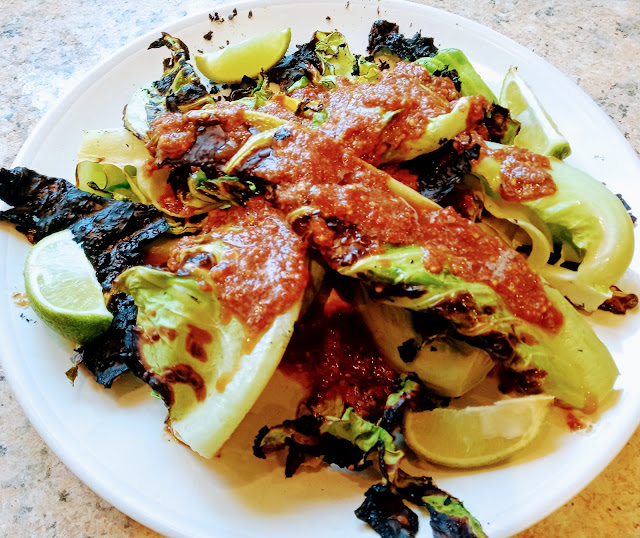 Hispi Cabbage with Nam Prik - this was probably the biggest surprise of all the dishes. I would never in my wildest dreams have considered barbecuing cabbage. But the outer leaves went charred and crispy and the inside ones soft, sweet and tender. Delicious! Because of Mark's fish allergy, the chef had adapted the Nam Prik recipe to use soy sauce instead of fish sauce. It also included lime juice, chilli, tamarind and cherry tomatoes. 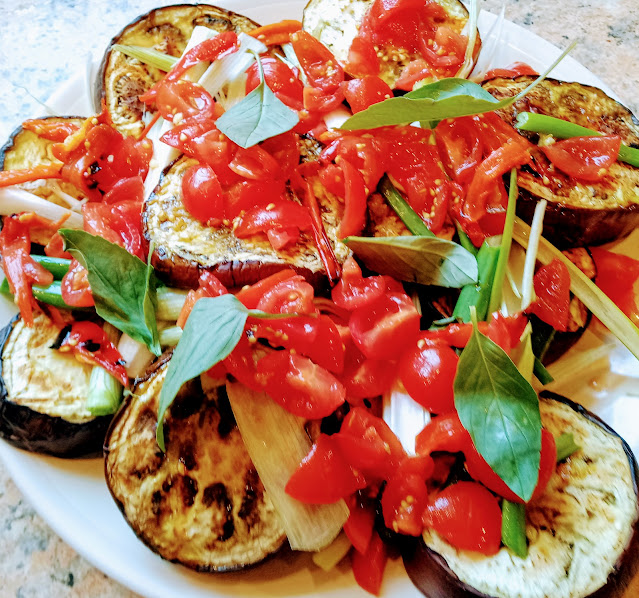 Charred Aubergines with Charred Chilli Salsa -  Now this was a real test of the recipes, as none of us are big fans of aubergines. However cooking them on the barbecue means they didn't go at all slimy, making them far more appetising, and the garlic and ginger oil dressing and chilli and tomato salsa gave them a lovely freshness. We all had second helpings! 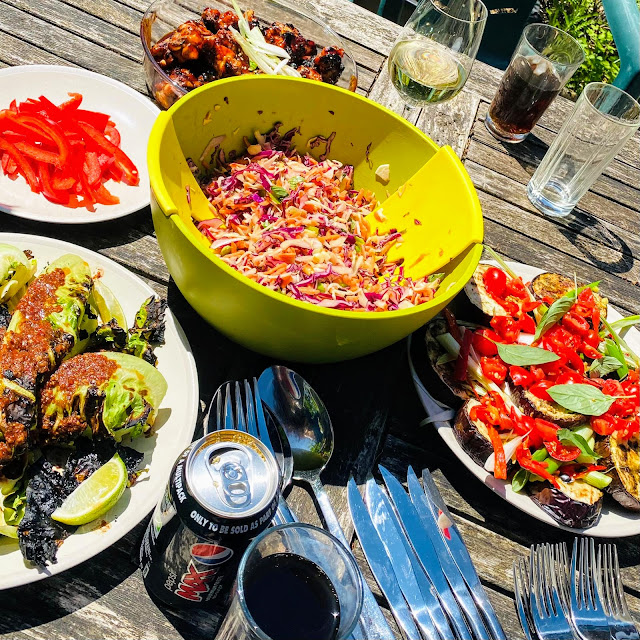 The finished feast! Well, apart from the beef  - I couldn't find a moment when somebody wasn't refilling their plate with it.

We had a wonderful day. It was pretty chaotic at times - six of us cooking and chopping as hard as we could on any available surface in our small kitchen. Apart from marinating the beef and chicken ahead of time, everything was prepared and cooked in the space of a little over an hour, so it really was a bit of a frenzy. But that seemed to add to the excitement and fun of the day. And it made sitting in the glorious sunshine to enjoy our banquet even more relaxing.

We've all agreed to make exactly the same menu together again soon - but maybe this time working at a more relaxing pace!