One of my oldest and most favourite stamps is the Hero Arts vintage tulip stamp. Oddly enough it is also my six year old granddaughter's favourite, and she would much rather use it than the fun children's designs I have stocked up with for her. 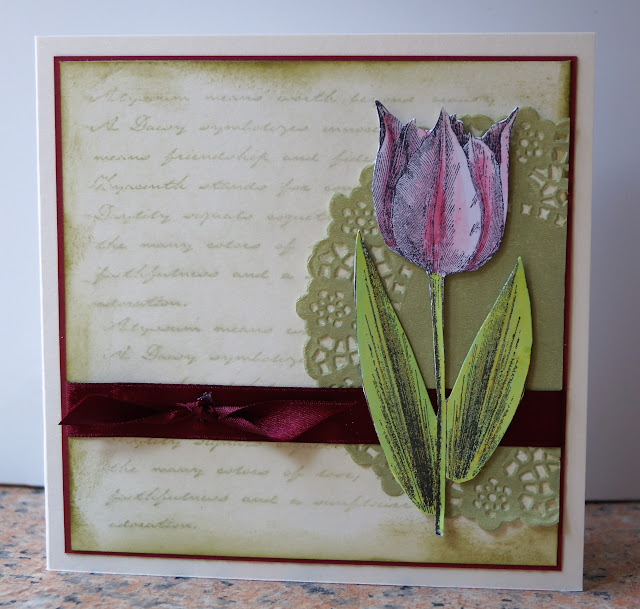 Today I've combined it with a script stamp, it's an old unmounted red rubber one so I must have got it in a grab bag at some point. The script is hard to read but it's all about the language of flowers, so ideal to use with a floral image.

I stamped the script to fill the background, using Versmark ink, and then dabbed several shades of green chalk over it and inked the edges. The tulip is coloured in with Promarkers and has made me realise I need to get some more, less harsh, shades of green!

I'm sharing this with House of Cards, where the April challenge is a colour challenge and/or script.  I've nailed the script side of it, but my poor selection of greens means the colour challenge part is a bit off-message. And it's only now, while copying the inspiration photo to paste here, that I've realised I've subconsciously copied the image on the photo - that wasn't intentional! But it just shows what a lovely picture it is and how it stuck in my mind. 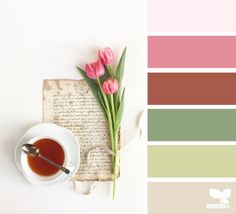 Looking at it again did you get the 3d effect with colouring? If so it really does pop out at you in a nice, gentle way!

A beautiful card Jane. That lovely stamp looks like an etching. Barbxx

I can see why this stamp is so loved. Fabulous colour to the tulip too. Cara x

How is it I am always in awe when I come here? I should just expect to be amazed and let me tell you this is no exception!!! you three dimensional tulip is divine and so original. The doily and the background are a perfect fit for our challenge!! Thank you, thank you, thank you for sharing with us at HOC.. Come back now ya hear?
Cyber Hugs,
Shawna
http://thegrandstampede.blogspot.com/

The vintage simplicity of this card is STUNNING! I adore the use of color and beautiful coloring of this image! Thank you for joining us at House of Cards! Sending HUGS! :) Mynn xx

PS: I'd love for you to link this up with us at MHKDesigns, too! www.mhkdesignsbymynn.blogspot.com

Beautiful! Thank you so much for joining us at House of Cards :)