Today Edna's gone all magical - our theme at the Sisterhood of Snarky Stampers is U is for Unicorn. 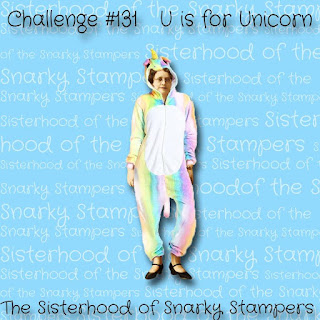 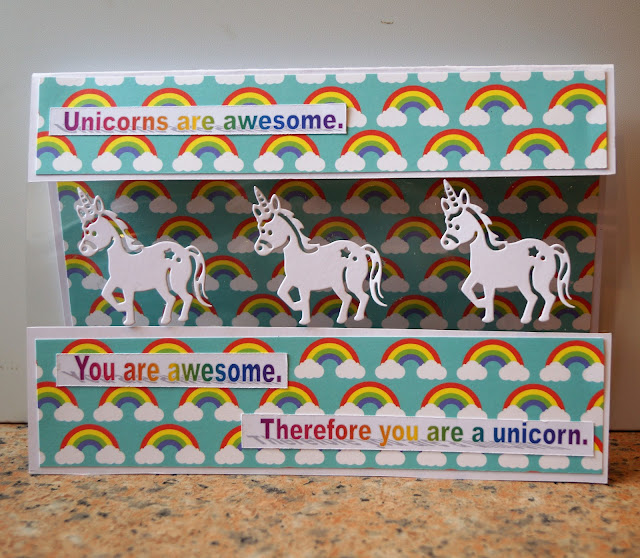 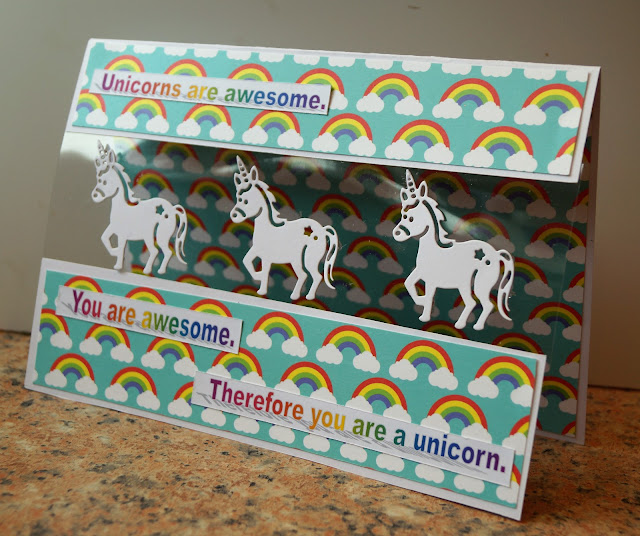 I used a Dovecraft die for the unicorns. I really wanted them to be pure white - as far as I am concerned, unicorns are, and always have been, pure white and all this rainbow malarkey comes from the 1980s Rainbow Brite craze. However as a concession to the fashion for associating unicorns with all things rainbow, I really wanted to use them with this background paper. The trouble was, they didn't show up against such a busy pattern.

Mounting them on an acetate panel in the front of the card means the background is still behind them but far enough behind that they show up. It also pays a token tribute to the complete and utter myth that unicorns can fly. Of course they can't, it's Pegasusses that can fly! (Any discussion on the topic of the difference between a real myth and a mythical myth to be written in longhand on A4 paper and sent to Father Christmas, c/oThe North Pole).

Now to the sentiment, which I've adapted from a popular meme. The inspiration for how I created it comes from one of those Share if you remember this" posts that goes around on Facebook,  it has a picture of the "Word Art" logo and says "Share if you remember when this was considered to be exciting" or something like that.

Well, if like me you are old enough to remember when switching over from the black typewriter ribbon to the red one was enough excitement to see you through the week, you can probably recall how exciting it was to discover all the exciting things that Word could do. (I'm going for a world record of excitement in that last sentence). Sometimes even when you didn't want it to... I can't be the only person ever to have written a business letter and accidentally put floral bullet points into it. Borders, backgrounds, fonts, wingdings, clip art and Word Art; it seemed like a whole new world of creativity! And that shadowed rainbow effect in Word Art was my absolute favourite. So I just had to use it here. Rainbows and unicorns and all that.

Think yourselves lucky I stopped at that and didn't also use Comic Sans.... 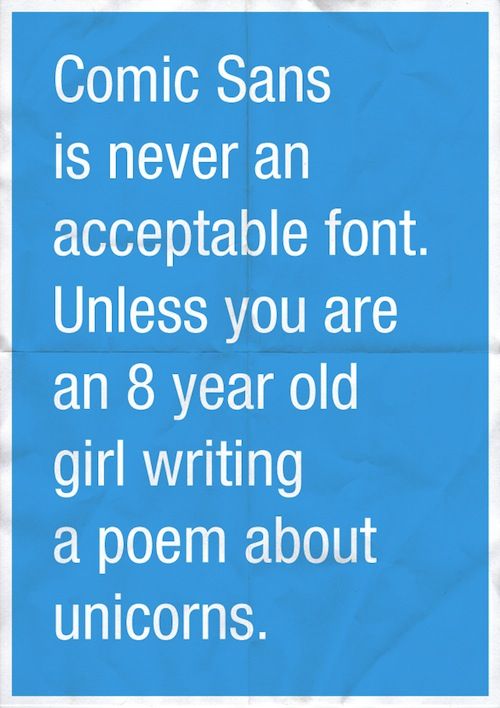 And on that note, why not head over to the Sisterhood of Snarky Stampers and share your unicorn themed creations - you could be our next Queen or Princess of Snark!
Posted by Jane Willis at 11:30

Awesome card, fabulous lessons and I love love love your card. great design with the acetate.

I love it. It's just fabulous. Love Dawn x

Such an amazing card! I so agree: unicorns do NOT have wings, Pegasuses do. I'm mean really, they are two completely different magical creatures! LOL! Loving the rainbow wording....comic sans or not!

Brilliant card, Jane! I'm with you on the whole white unicorn thing too, Jo x

So many truisms in your post! Fabulous card, right sown to the rainbow word art sentiment. (I think I might be more Team Pegasus than Team Unicorn...)

Unicorns, rainbows, colourful and awesome sentiment, this card has it all!!!

Aw gorgeous card, and yes I remember when word processing was super exciting with all the options for colours and fonts, even if they were impossible to read I was entertained! Love your pure unicorns too
Jenny x