Sorting out the snippets

Although I've posted a few times using cards I'd made in advance, I've not actually been crafting for a few weeks now because we've had a constant stream of house guests who are inconsiderate enough to expect to be fed, which means me clearing away all my craft stuff from the dining room table, so most of it has been locked away in the garage. I spent yesterday bringing it all in again and restoring it to the it-looks-a-mess-but-I-know-exactly-where-everything-is state that I find best for crafting. (Just an aside here - I thought Mark just viewed my crafting "arrangement" as just chaos, but this morning he spilled some cocktail sticks on the floor and I said "Don't worry, I can use those for applying glue" and he put them in exactly the right place!)

While everything was packed away I took the opportunity to tidy out some of the boxes and drawers I use, in particular the snippets box because I was wasting a lot of "I know it's in here somewhere" time. So, with everything set up again, I was raring to get using some of my newly organised snippets, and I used LOTS of them in this card. 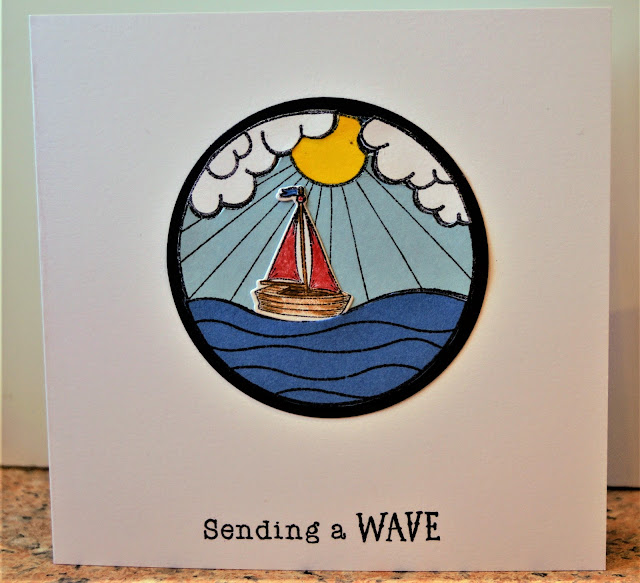 All the stamps are from a magazine freebie set a couple of years old. I stamped the background onto several different coloured snippets with two copies of it on white, then paper pieced the design onto one of the white backgrounds. Before adding the sea piece, I stamped, die cut and coloured the boat and added it so the water slightly overlaps it where it is dipping into that large wave. I added a black die cut circle to frame it all.

Now, as I'm so far behind with things I'm going to need to do some serious combining of challenges, so I am sharing this with 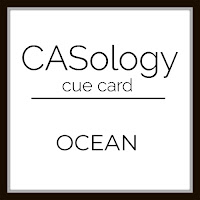 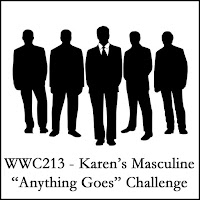 What a sunny little card perfect for any gentleman! I love your circle layout and CAS style. Thanks for joining us at Watercooler Wednesday.

I love that you can turn out something like this from bits and pieces. Love Dawn x

Fabulous scene! It looks almost like a stained glass piece. Thanks for sharing with us at CASology this week!

Awesome card! I love the bright scene! Thanks for joining us at CASology!

Oh I did giggle at your post Jane! The good thing about crafting in the dining room is that it get used all the time and when visitors come it makes you have a sort out! Here, I ignore our dining room, apart from occasional dinner guest/overnight visitors wanting a full English (VERY few these days) and of course the likes of Christmas when it only seems right to be all proper with crackers, pretty (electronic since I almost set us on fire) candles and such. And that means my craft room ends up like a crapalanche waiting to happen, sigh! :( Ha, maybe I ought to have a dinner party in here sometime - you can wo(man) the Cuttlebug!)

Which brings me to your lovely card, it looks just like stained glass and I love it! I know you love the sea from what I've seen of many of your beautiful cards - and this really is CAS yet so evocative of the sea - I can almost smell it! Great card.

a very cool card!
thank you so much for playing along with us at make my Monday challenge!

hugs and kisses from germany ,
Silvi

Wonderful scene using your stash. Bravo! Thanks for joining in the fun as CASology this week.