One of my favourite recipe books is a thick volume called "Economical Cookery" published in 1937. It was given to me by a boyfriend's mother while I was at school - I think she had romantic notions of me and her son staying together forever and the book becoming a family heirloom. Ha! I'm delighted to say that my relationship with the book has lasted many times longer than my relationship with her little boy did!

It is aimed at the sort of middle class families who, between the wars, found that their way of life had changed. No longer did quite ordinary people in ordinary homes have staff to cook and clean for them, and housewives were suddenly finding that they had to learn skills that they hadn't been taught by mothers who had thought, at the time, they would never be needed (and probably didn't have the skills themselves).

So the book covers everything from absolute basics, like how to use an oven, and how to mash potatoes, to dishes that wouldn't look out of place at a modern dinner party. But the emphasis is on good value, everyday filling food for families, and although relative prices of some items have changed (for instance in those days poultry was a luxury compared to other meats) I still find it a valuable source of recipes, especially for soups, stews and bakes.

But my favourite section of all is a set of menus for every single day of the year, each based on items that were in season or available dried or in tins, as frozen and many imported goods were either unavailable or far too expensive for the target audience of the book. Every item of breakfast, lunch and dinner is included, and the menu for each Sunday is costed out. The menus are very practical - Monday's meals usually include dishes made with Sunday's leftovers and the recipes for them are included in the book.

One thing that is immediately striking today is the sheer quantity of food! Three hot meals a day  with pudding at two of them! With our modern, sedentary lives and constant snacking, we'd all be the size of double decker buses if we ate like that at mealtimes!

Here's the menu for the final Sunday of January 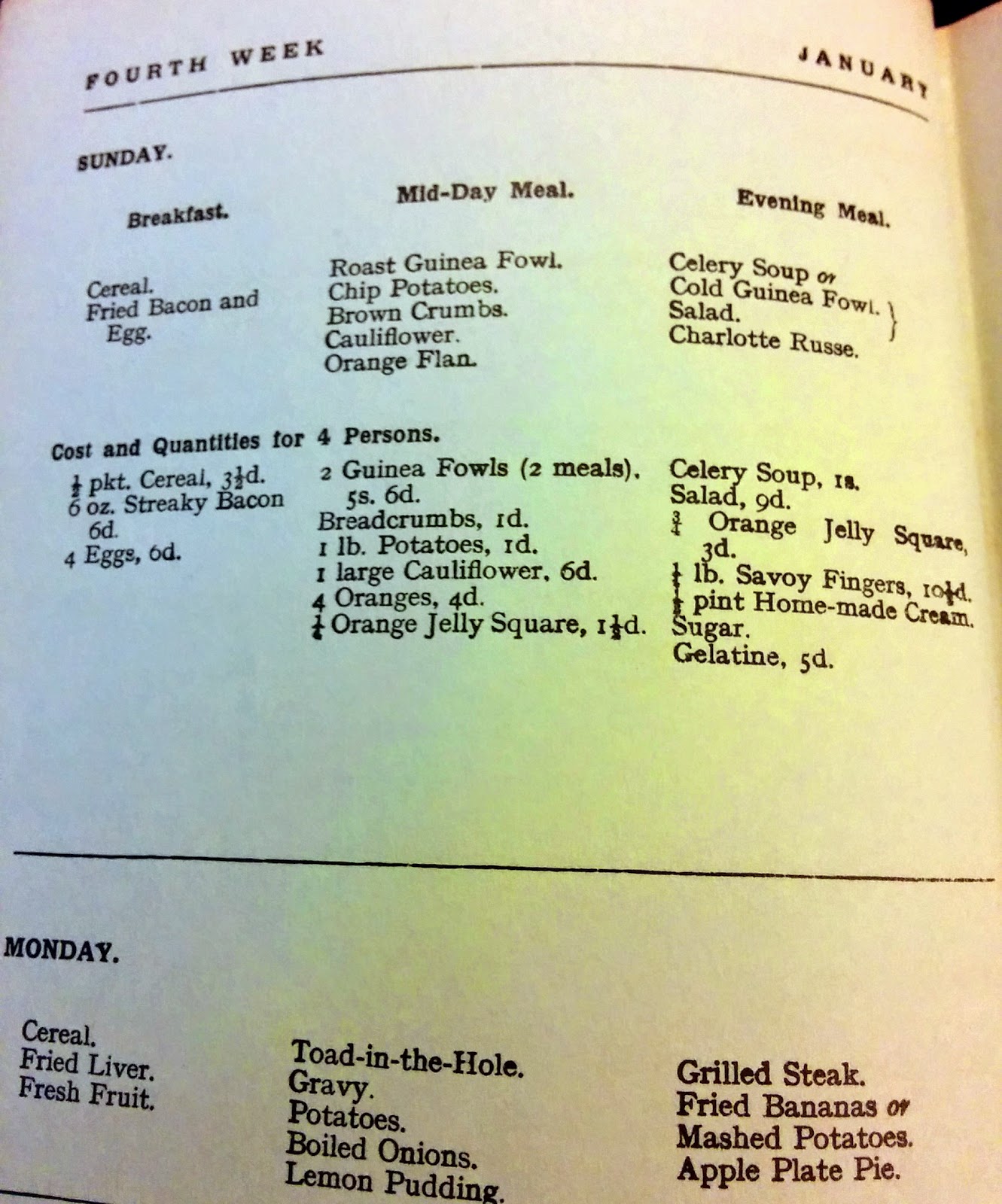 Just out of interest, I've checked the prices of the items at Ocado, going for the Waitrose Essentials items where possible. Here are the approximate equivalent prices today (for comparison, 1s then was 5p now, and 1d was about 0.42p and 1 oz = 28g, 1lb = 454g )

I adore old cookery books, I have loads that were my grans and they make fascinating reading. I love those menus, it would be great if books today did similar

Fascinating! Two puds a day - that sounds a bit excessive. Are brown crumbs for coating the guinea fowl? or cauliflower?

Just realised we continued this conversation on Facebook but other people might be wondering the same thing. I have several old recipe books that refer to pheasant, partridge and guinea fowl being served with an accompaniment of "fried or browned crumbs" but they have no illustrations and don't suggest any quantities.

Thank you for sharing this - what a treasure! And I'm amused by your comment about the book outlasting the boyfriend.