To mask off the card so I could sponge the "swoop" of colour onto it, I cut a curve in a piece of acetate then  opened it out at one end. I didn't think I would be able to hold it still well enough to give a neat edge when sponging, and tape wouldn't have given a smooth edge. Having no low-tack adhesive to hand apart from single sided tape, I solved the problem by adding small pieces of double sided tape to the underside of the acetate and sticking low tack tape, sticky side up, to them. It worked a treat!

I sponged the space between the pieces of acetate with the individual inks from the Kaleidacolour Autumn leaves pad, then removed the acetate and stamped the small leaves from a Rubberstamp Tapestry set over the top, stamping each one two or three times before reinking to give some variation in intensity.

Finally, the sentiment, stamped with the same pad, is an old Paper Artsy stamp. 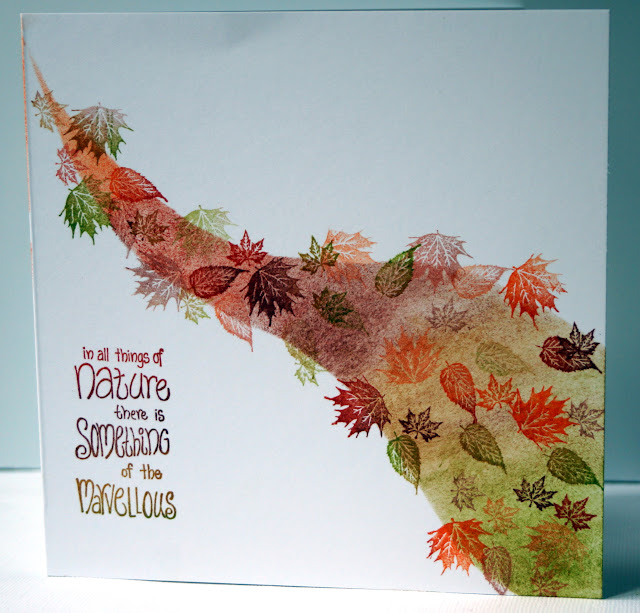 I love your swoosh of leaves, Jane. Such great movement and a wonderful one layer card.
Thanks for sharing with us.
Anita x
Less is More

Great design. I love how you've stamped in the autumn colours too. xx

This caught my eye on the challenge blogs. Very effective and very clever idea. Loving the movement and colours, great card x.

A beautiful design and full of gorgeous leaf stamps blowing around!
Perfectly CAS and one layer-tastic Jane, thanks so much for sharing and taking part.
Sarah xx
Less is More

What a lovely swirl of autumn leaves!
Super card!
Thanks so much
Chrissie
"Less is More"

I'm catching up on my commenting after my hols, sorry to be so late!
Fab movement Jane, love your blustery day
Thank you for joining us
Anne
"Less is More"

You have created such a feeling of movement in this card,lovely colours too.