Button Up at Cardz 4 Guyz

This week at Cardz 4 Guyz we are looking for buttons on your card - and don't forget it has to be suitable for a man or a boy!

Inspired by something I saw on Pinterest, I decided to make a shirt sleeve with a buttoned cuff. I felt the one I saw was too wide for its height - it didn't look quite "sleevey" enough. So I made mine from a DL sized card blank. I covered the whole thing with a sheet of Docrafts "Heritage Press" paper, which is intended to look like a shirt fabric, with the stripes running vertically down the card. Then I cut a piece of the same paper with the stripes running horizontally, the width of the card and 6.5cm/2½in deep and stuck that to the bottom of the card.

I wanted to round the corner but my corner rounder was too small to give the curve I wanted, so I chose a circle die (you could use a coin) that looked the right size, drew round it on the inside of the card and then cut it out. I added a strip of horizontal striped paper to the inside of the card to show through the corner area when closed, making sure the stripes matched as they would on a real shirt.

I used a black gel pen to make faux stitching around the edge of the cuff, remembering to leave the folded edge unstitched as that is where it would wrap around the man's wrist in real life. A white pen would have been more authentic but it wouldn't have shown up so well - I tested both on a scrap of paper and decided to sacrifice authenticity to get the effect I wanted!

I also drew in buttonholes with the black gel pen and then stuck real shirt buttons in place over them.

At this point the "sleeve" was complete but there was rather a lot of space left above the cuff, so I've embellished the card with a sentiment also from the Heritage Press range - I thought it was just enough to add interest and make it look more of a card without taking away from the simplicity of it. 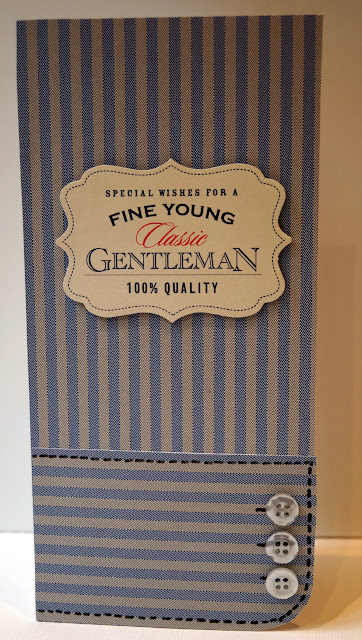 How are YOU going to use your buttons this week? We'd love you to pop over to Cardz 4 Guyz and show us!

Oh my god this is soooooo cool! Great masculine card. Thank you for joining our ATSM challenge. Creative regards from stempelfrida

LOVE this! It looks SO real! Amazing make ~ xo Christi

Hi this is amazing. Thank you for joining us at Alphabet Challenge Blog challenge Q for Quick and Simple. Hugs Jackie (DT)

Great take on the challenge Jane, love your sleeve! :)

I see I must CASE ing your idea
ths is really cool
awesome idea for manly card
and we can make too for thanks card
wooow Jane thanks for sharing your idea
I LOVE THIS much
hugs, Monika

Great male card. Thanks for joining our challenge at Creative Card Crew. Hope to your work again.
Hugs, Yvonne