Way back in the early 1970s, when I was a student, I collected, and learned to cook from, the Cordon Bleu Monthly magazines. There were 18 of them plus two special issues, a freezer one and an entertaining one. The recipe I used for this flan was from the entertaining issue. It's one I've been going to get around to cooking "soon" for the last 40 years. 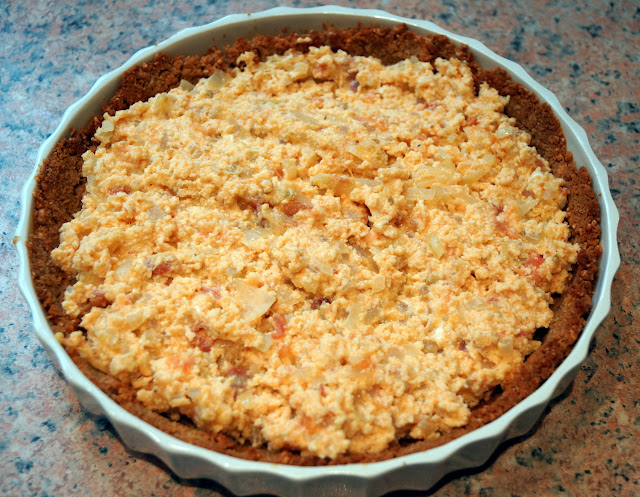 The filling is made from tomatoes and onions, cooked together to a thick pulp and then half a dozen eggs and a little cream scrambled into the mixture.

The really interesting part was the biscuit crumb pastry. I've never seen a savoury one before. This was made using a packet of Cheddars (other cheesey biscuits are available!) instead of the usual digestivey hobnobby gingernutty things and grated Emmenthal instead of sugar. As with the sweet variety, it can be used uncooked or cooked.

I thought the uncooked version looked -well - good enough to eat  - but ooooooh once I'd cooked it and the house was full of the divine cheesey smell I was glad I took the extra step. And it made a lovely crispy, crunchy crust. 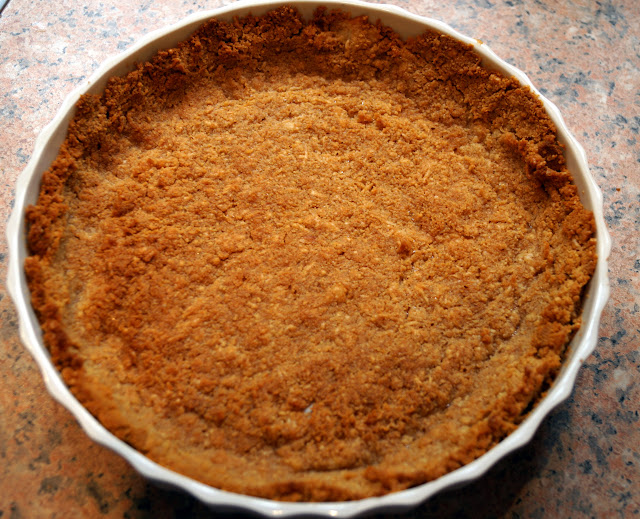 The overall verdict - the crust was absolutely delicious and I'll be using it again. I found the filling a little bit sickly, although that could have been because I wasn't feeling very well at the time. I'd better stop writing now before my poor spelling checker has a nervous breakdown, and head over to Belleau Kitchen where I'm joining in with this month's Simply Eggcellent

this is such an old-fashioned but lovely dish. I am totally delighted with the idea of it and could, quite frankly, do with a slice. Oh and that crumbly pastry idea with cheddars is GENIUS!!!!!! So 70's!

oh and thanks for linking to Simply Eggcellent x