Lots of Glitter and Sparkle

This week it's the third birthday of Glitter 'N' Sparkle and they are celebrating with a blog hop as well as their usual challenge. I've had a rummage through my snippets box and found lots of lovely glittery, sparkly bits to put together for this card.

Initially the sentiment was going to be a pre-printed topper, which I only had one of, saying "Hope your birthday is packed with sparkle" - I thought that was very appropriate! But I decided to decorate the topper with some glitter. I was applying glue from a new bottle, the fine-tipped nozzle split and the glue went everywhere! I tried to scrape it off, but the glitter still stuck to the residue and in the end the whole lot, bottle of glue included, went into the bin.

Plan B was called for, which was to stamp a sentiment using a glue pad and glitter that instead. Which worked so well I wish I'd skipped plan A and gone straight for plan B in the first place.

The die cut leaves were in a RAK, so I'm afraid I don't know what dies were used. And the backing papers are both heavily glittered too, although it doesn't really show in the photo. 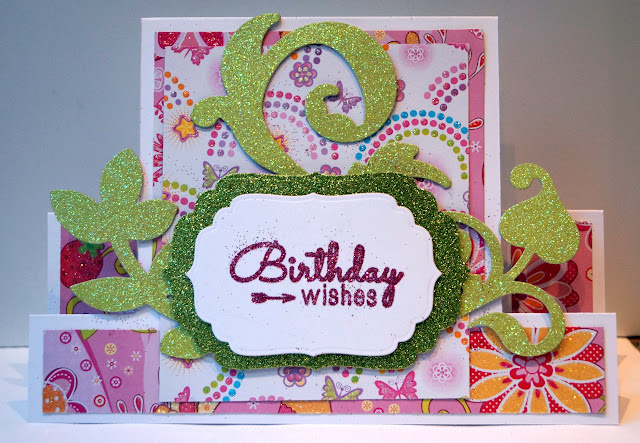 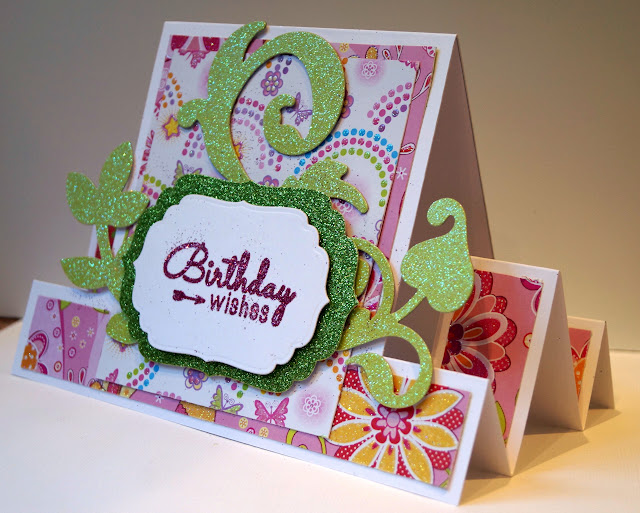 I'm sharing this with:
Glitter 'N' Sparkle - Lots of Glitter and Sparkle or a Sparkly Charm
Pixie's Snippets Playground week 196
Posted by Jane Willis at 06:25

Lovely stepper card, love all the Glitter, such a cheerful card x thanks for sharing at Glitter n Sparkle Chris DT x

Great stepper card Jane and so sparkly. Those colours go together really well, a little bit retro too :)