Pegg - a great gadget for crafters and cooks

Have you ever tried cooking a recipe, or following a craft tutorial, from an app or website on your tablet? Or wanted to keep a picture on it, perhaps one you found on Pinterest, open for inspiration while you work?

And did you find that just as you reached an important step and your hands were covered in flour/dough/meat juice/ink/glue/glitter, the tablet put itself to sleep and you had to do the whole swipe and enter your pass code thing to get back into it?

I certainly have, and it's so frustrating that I'd just about stopped using my tablet for cooking and craft inspiration.

Until, that is, I met Pegg. Pegg is a cunning little why-did-nobody-think-of-it-before gadget that you clip to your screen to stop your device from going to sleep. I found out about it when I saw that there was a competition to win one on their website a few weeks ago. Well, you know what a competition addict I am! I read all about it and, although it appeared to be intended for gamers, thought immediately how useful it would be in my own hobbies, so I entered the comp - and was delighted to win it! 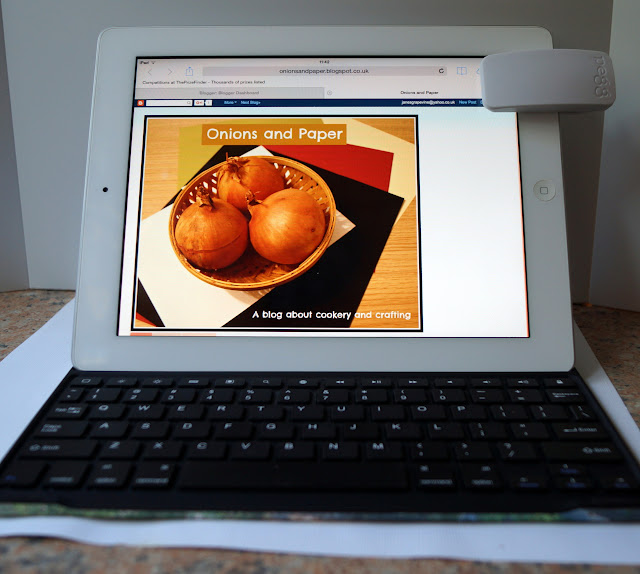 As you can see, it clips unobtrusively to your screen and acts like an electronic finger, keeping the device awake. I'm so delighted with it that I've celebrated by subscribing to Food network magazine on my iPad, now I know I can cook from it without having to wash my hands to keep waking it up.

Another use I've thought of since getting it is when a child is using your tablet and gets distracted, or has to dash off to the loo as children do. If Pegg is clipped in place the tablet won't go to sleep and that means you don't have to tell them your passcode so they can still only access the device when you want them to!

Pegg costs £29.95 and can be bought directly from the site or through eBay.

Note - this review is completely unsolicited by them, I am telling you about Pegg because I am so delighted with it, having won it in their competition. They hadn't thought about the uses I've suggested, although after chatting with me they now mention the recipe-following aspect on their site, so I offered to post this review to help to introduce Pegg to a new audience.
Posted by Jane Willis at 09:51

It sounds a great idea Jane. I don't think I'd have much use for it but off to tell hubby. I'm sure he'd find it useful plus he loves gadgets. Thanks for sharing. Barbxx

Hi Jane, me again. Sorry I forgot to congratulate you on your win. Well Done. Barbxx