Not a creature was stirring....

... not even a mouse! Well, apart from those that were busy decorating the tree, that is! This cute image is from a Seraphina design sheet with matching backing paper that was in the goody bag a friend picked up for me at a craft event she attended.

To make the card, I put folded white card through the Grand Calibur with this Marianne Creatables die, making sure the die was offset over the folded edge to leave an uncut area for the hinge, and positioning it so it would be possible to fold one leaf of the card in half horizontally and have all the scallops match up.

Then I used the die again, this time to cut and emboss in dark green card - embossing on dark card doesn't show up very well on photos but in real life I love the subtle way it adds texture and "feel" to a card without detracting from the image. I stuck this to the folded-over flap of the base card, carefully lining up the scallops. I usually decorate the front panel of an easel card before assembling it, but because of lining up the scallops I did the assembly first - I didn't want the image to end up sitting at an angle and looking as if the mice had been at Santa's glass of sherry.

Die cut circles of backing paper and green card covered the base panel, with a "stopper" made from another image from the sheet, raised on foam pads. I'd planned to use white gems around the edge to embellish it, which was why I used white for the base card, but found I didn't have enough, so used gold ones instead, which means I wish now I'd made the base card from gold card instead! 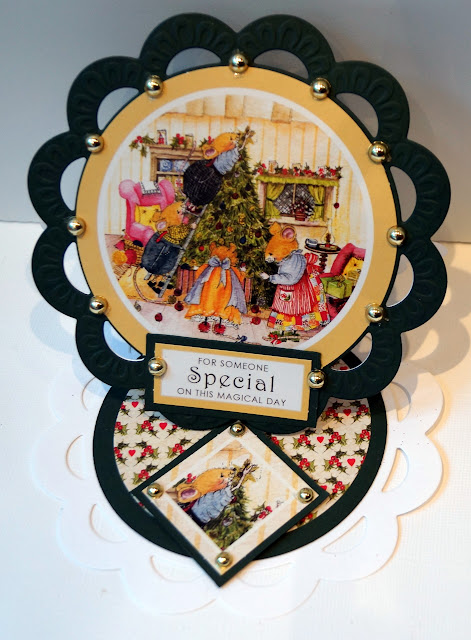 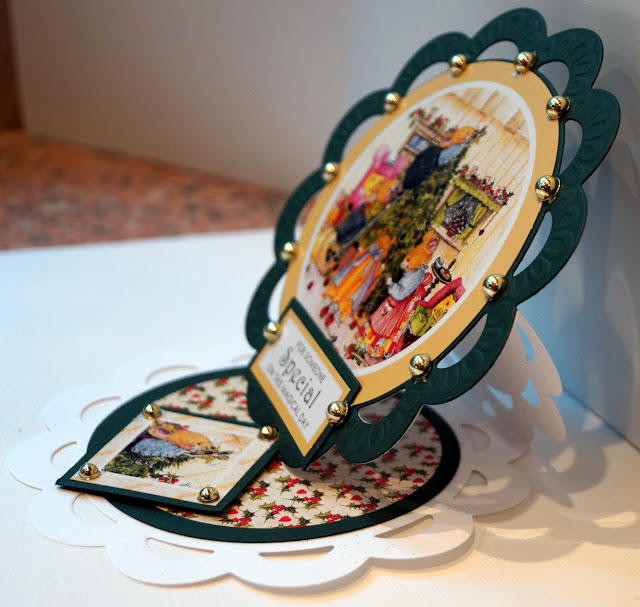 Clever easel card. Thanks for the detailed instructions. I'm going to give this a try when I get to use the Bug at my craft class. Love the sentiment. Was this on the sheet too. Hugs Wynn x

Brilliant card! perfect for our Easel card challenge over at Ruby's Rainbow thank you for sharing with us
Shaz DT

Such a beautiful and elegant Easel card. Thanks so much for playing along with us at Ruby's Rainbow Challenges!