A day out with newly met old friends

Yesterday I was lucky enough to meet the lovely Darnell from djkardkreations who is over visiting the UK at the moment, along with a group of fairly local craft bloggers, many of them very well known, at a hotel in Southampton. We met up for lunch despite a rather late arrival from me and Sue from Zouave Cards as we got stuck in a massive traffic jam, and spent several hours talking, eating and laughing. But mostly laughing!!! Ladies, Darnell is just as warm and witty in real life as she is on her blog, and although Hammy couldn't be there in person he sent along something to remember him by, which I won't reveal as I know  that dozens of you who may be reading this will be meeting up with Darnell over the next few weeks.

I'll not list who was there and tell you all about the day, as Darnell has already done so here    but I have copied the group photo to give you an idea of the day 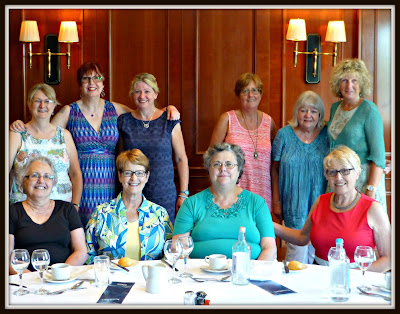 I wanted to take along a little something for Darnell, but was worried that if everyone she meets was to take her  a gift, she'd never be able to get everything home, so I thought it had better be something consumable. And what could be more consumable than chocolate? So I got a bar of our most famous British chocolate, the one that is so very different from any available in America. being a crafter, of course, I had to alter it - and I decided for a change to do it portrait -oriented rather than landscape as chocolate wrappers tend to be.

The panel die is a tattered Lace one and the dragonfly a Spellbinders one, all cut using  bits from my snippets box. The pearlescent paper used for the underneath layer of the dragonfly's wings is a very old scrap left over from a kit I had a few years ago - it was tiny but I knew it would come in handy one day! 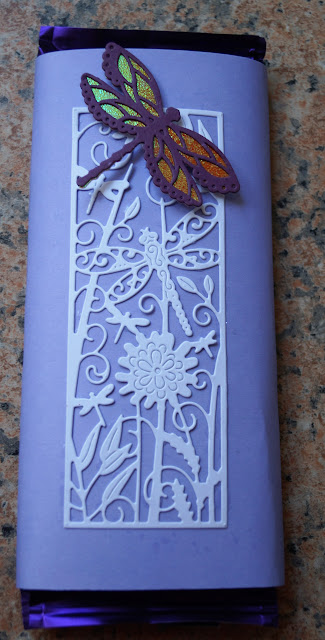 I would like to share this with Use Your Stuff where this week's theme is Die Cuts/Punches
Posted by Jane Willis at 16:37

Hi Jane! How totally fabulous to meet you and Sue yesterday - wasn't it a real blast! As you say, such a great time was had by all and I got to see your beautiful chocolate bar close up later on. Not the contents though, Darnell was keeping that for herself :)

Great photo of you all, glad you had a good time! I'm really looking forward to meeting Darnell on Saturday.

What a great way to wrap some yummy chocolate! Love the dragonflies. Thanks for playing along at USE YOUR STUFF - Gail

Glad that you had a fun time, I'm looking forward to meeting Darnell and some other lovely bloggers in Knutsford. What a fab way to dress up the chocolate, hope it didn't melt in this weather! Cara x

Hi Jane! I'm so glad to see that you posted that lovely wrapper you made me! It's been really too pretty for me to open yet and, no Cara, lol, it has not melted! I've kept a close eye on it! That beautiful dragonfly snippet is even more gorgeous IRL!

t was a pleasure to meet you, Jane! I'm sorry that you got stuck in a miserable traffic jam just to meet me; thank you for soldiering on and joining us! It wouldn't have been the same if you and Sue had not made it! Lots of love and hugs, Darnell (and Hammy!)