OK, OK, last post for today, I promise! After all, the grandchildren have gone home now so I'm no longer being "forced" to craft with them (not that it takes much forcing, especially when the alternative is to read them "Six Dinner Sid" for the 350th time).

When I was looking out the dandelion clock stamp to recreate my duvet cover yesterday, I also spotted this lovely big daisy stamp, bought from Just For Fun in the same batch, that I haven't used for years and lifted it out again to play with.

I had recently seen this on Pinterest:
https://uk.pinterest.com/pin/54465476722957168/
And really wanted to give it a try but in a completely different way. This was the result: 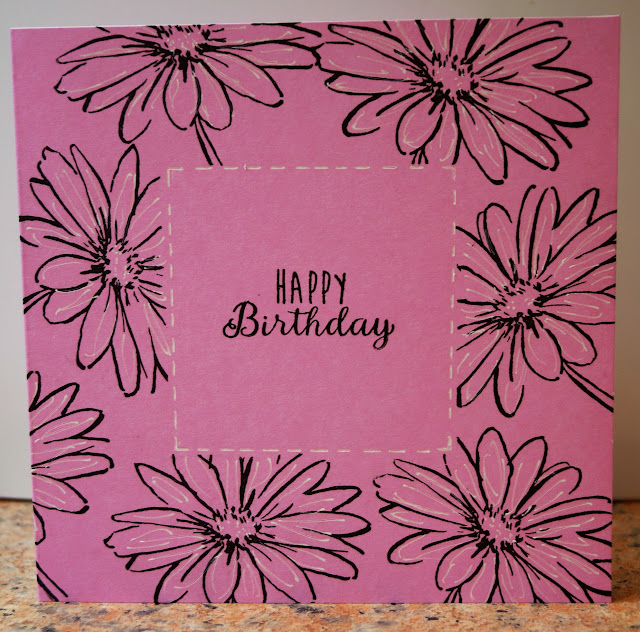 Although there's a lot going on here, I've kept it CAS by making it into a one layer card and only adding black stamping and white gel pen to the pink background. I think the same layout would also look good stamped on white card and coloured in, with the central panel matted and layered, but it would no longer have the CAS look I was aiming for.

PS I spent ages fiddling around with HTML trying to embed that pin in the post so you wouldn't need to follow a link in order to see it. I failed.
Jane

Wow you have been busy Some really fabulous cards Debbs xxxx

While a simple concept, a striking card. Thanks for sharing at Less is More!

Beautifully done Jane and a clever CAS design.
thanks so much for playing along with us this week at Less is More!
Sarah

Love this vibrant, pretty card! The floral stamp is great and looks so effective with just black and white against the pink background. Fab LIM entry, well done!

Fabulous design for a one layer card, loving that sketchy daisy.
Thanks for sharing with us.
Anita x
Less is More

It was great to meet you this week Jane... we did have fun meeting everyone didn't we... plus the indomitable Darnell!
Your card is fabulous, the touch of white really gives it a lift!
Thanks so much
Chrissie
"Less is More"

You made me laugh, Jane - 'being forced to craft' (I bet it was such a hardship!) Lol.

I love your version of the CAS design - it looks fab in the pink. Thanx for playing along at Fantasy Stampers this time.
Hugz, Jan (DT) xx

This is great! Love that you kept it to the two colors. Thanks for joining us at The Crafter's Cafe Challenge Blog!

Hi Jane, Loving your CAS card, so nice in the pink. A lovely flower stamp too. Thanks for joining us at Fantasy Stampers. Caz DT.